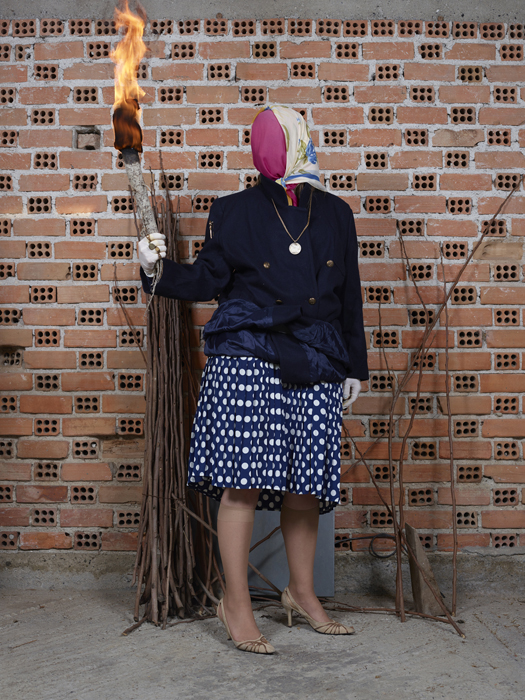 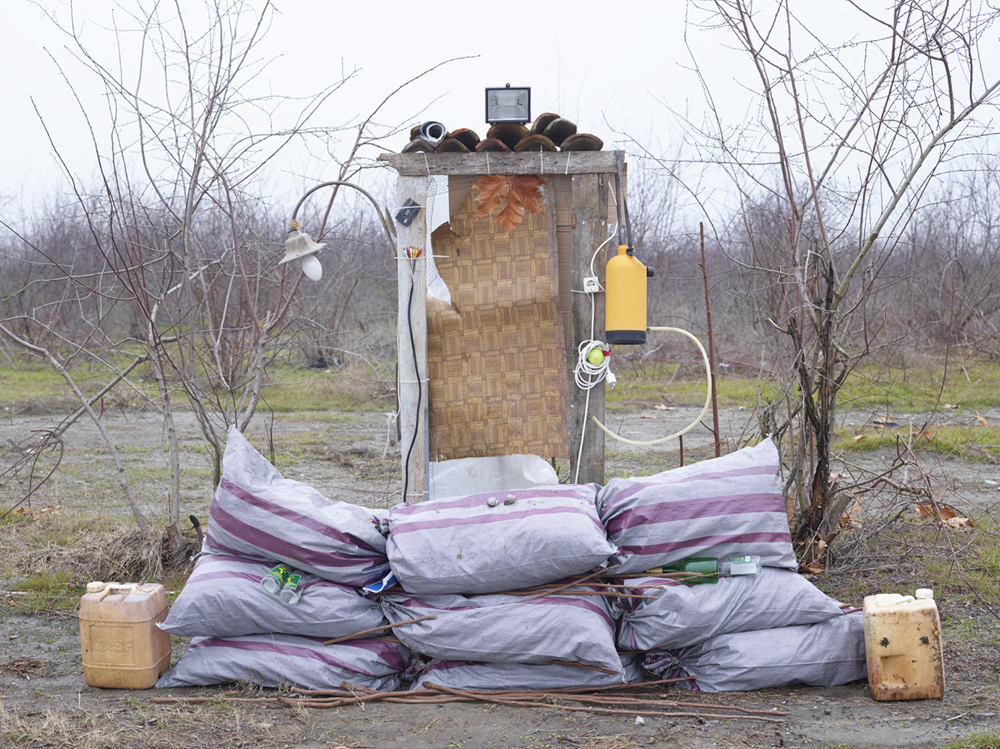 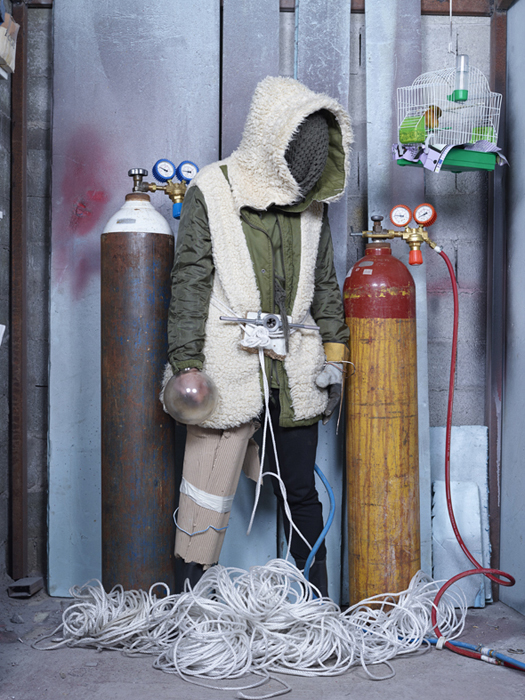 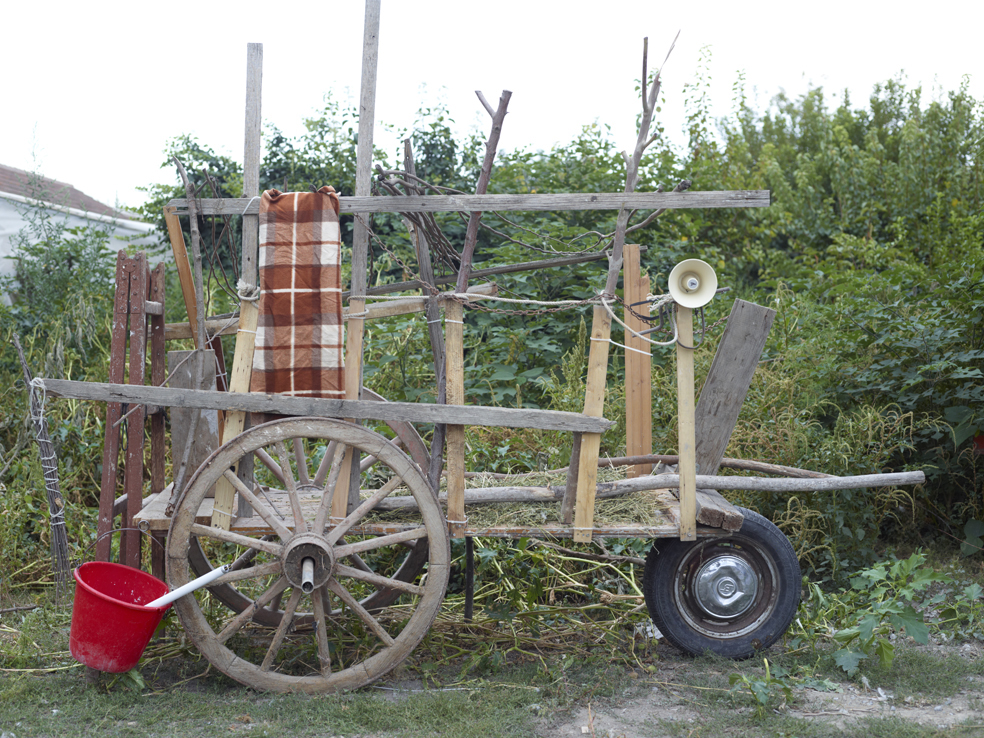 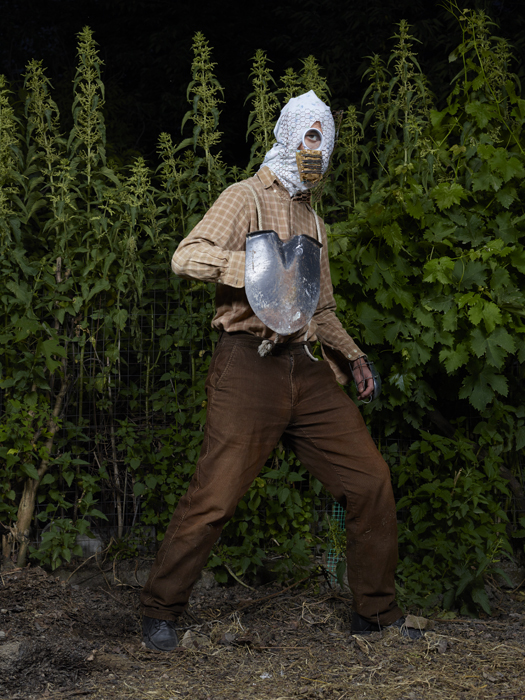 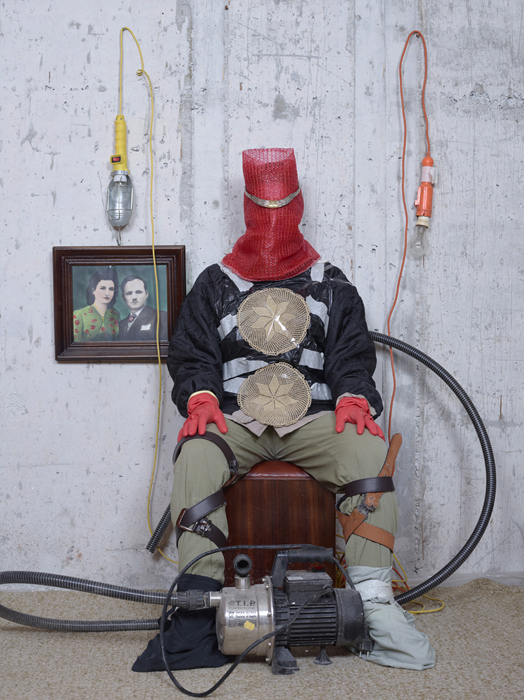 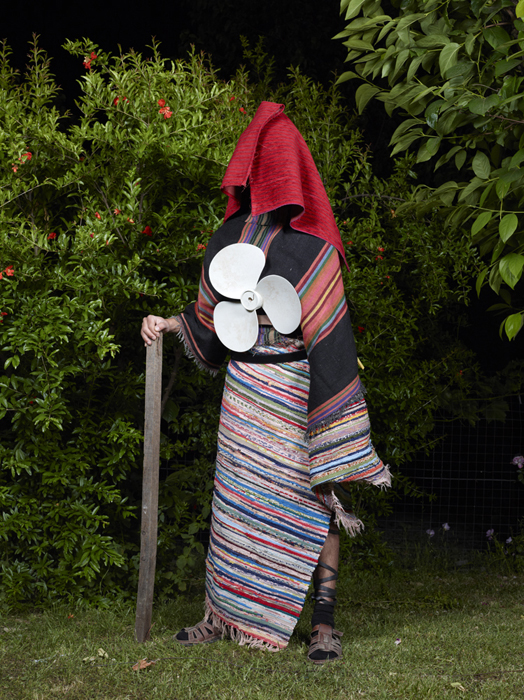 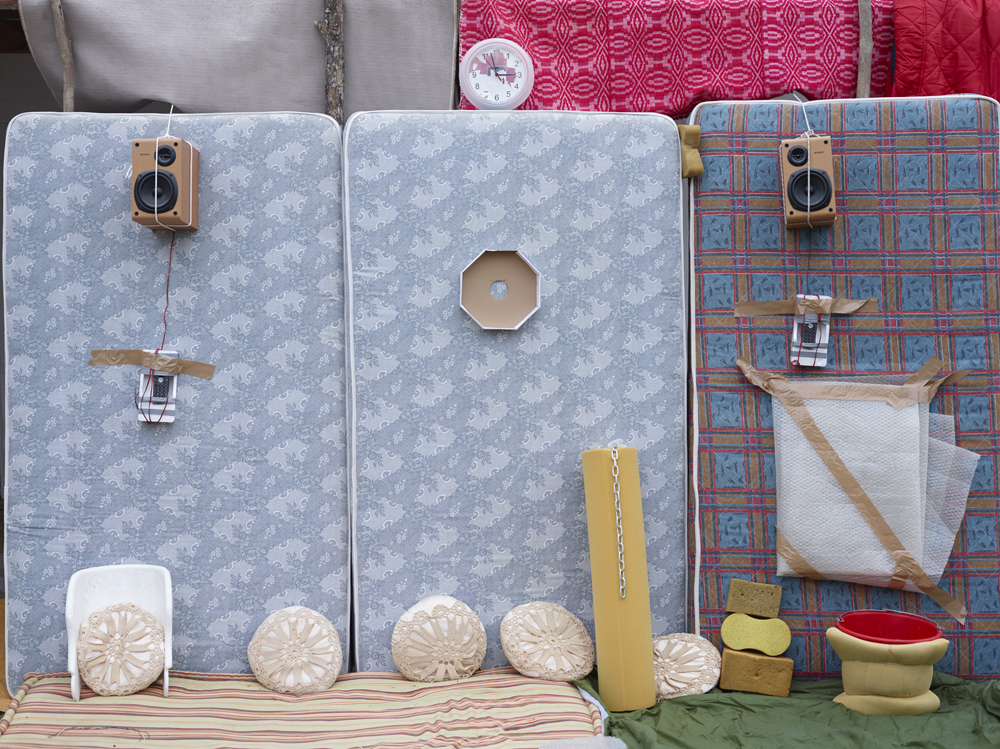 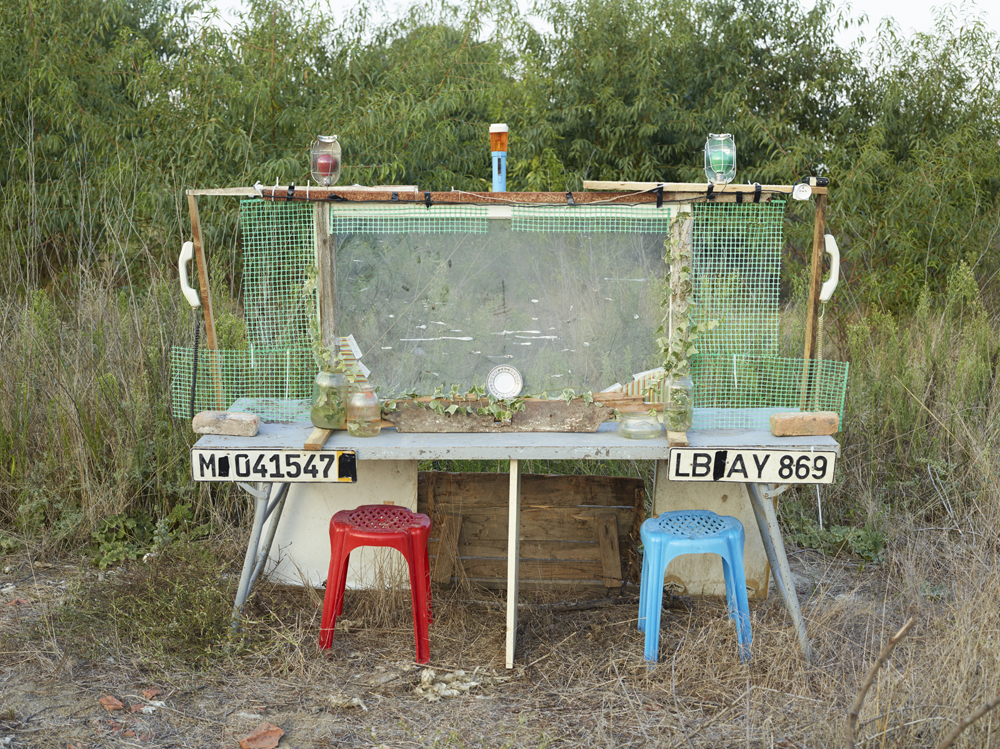 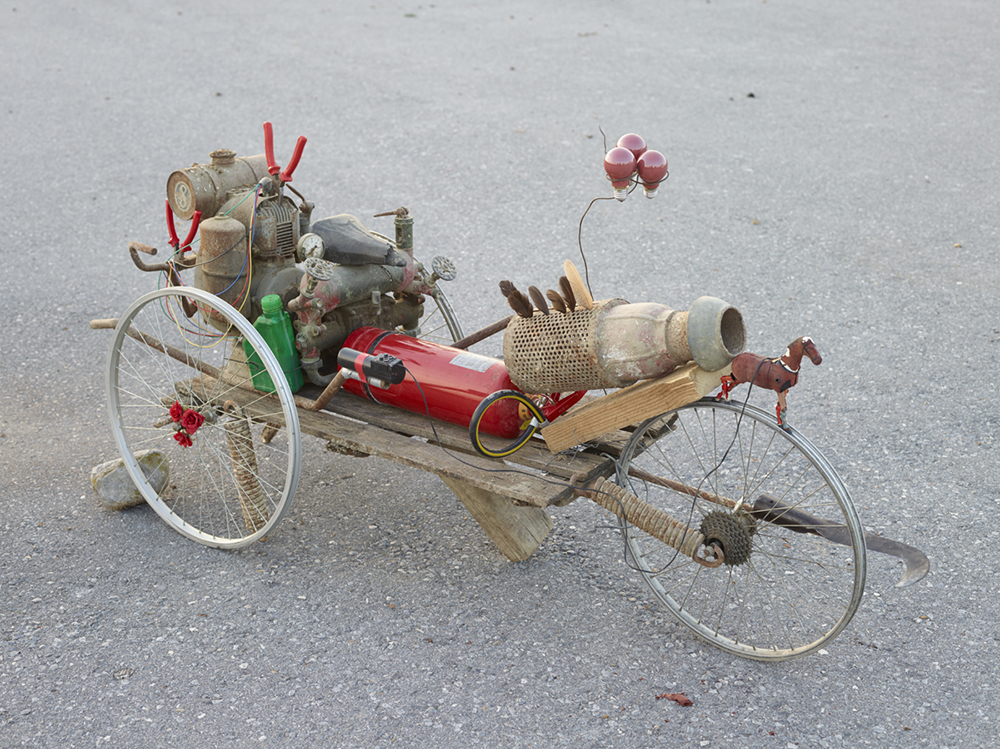 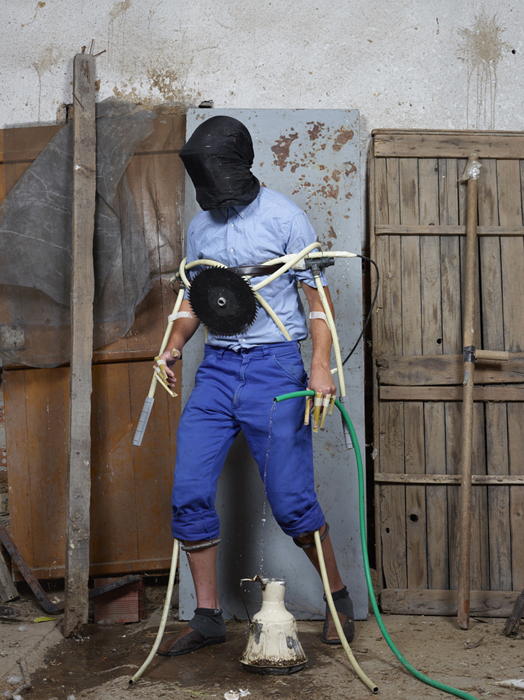 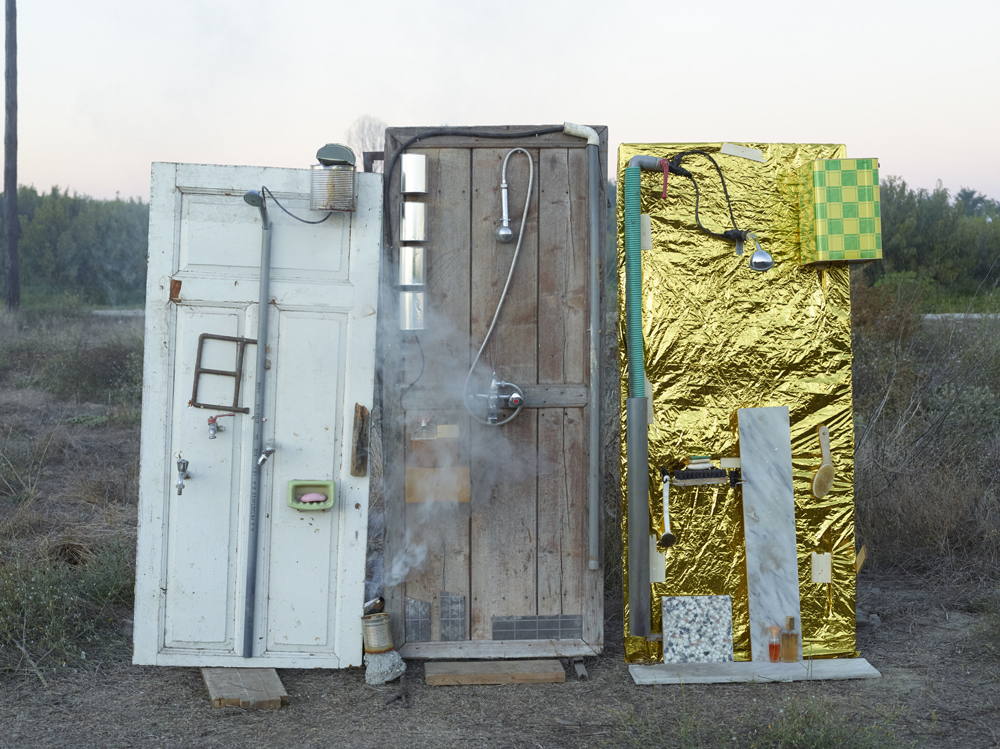 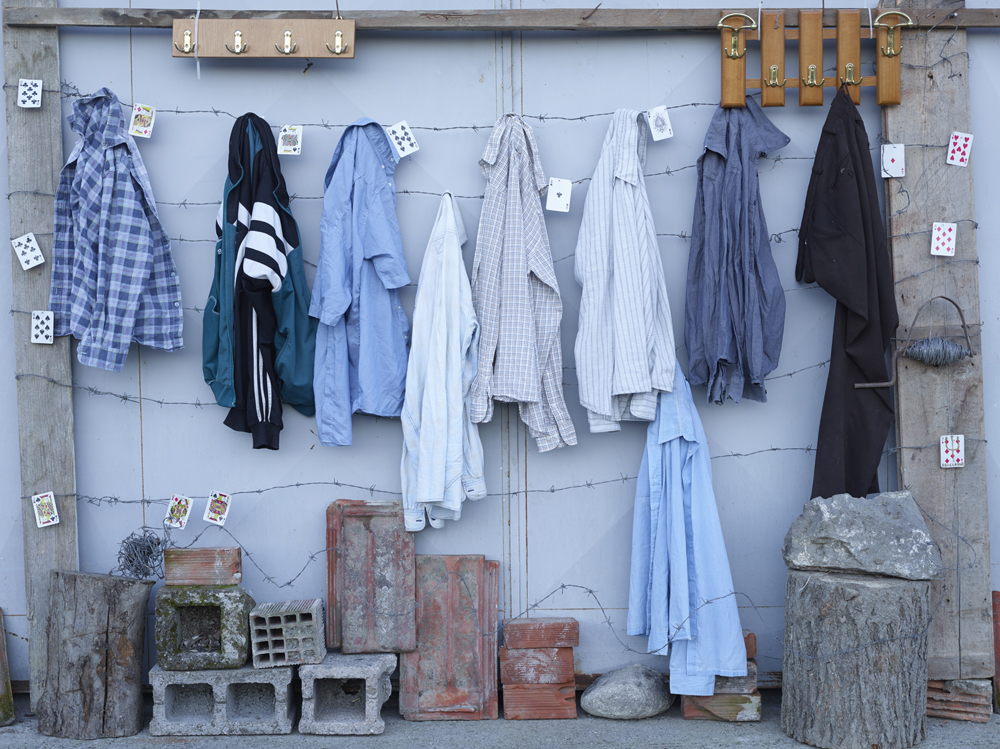 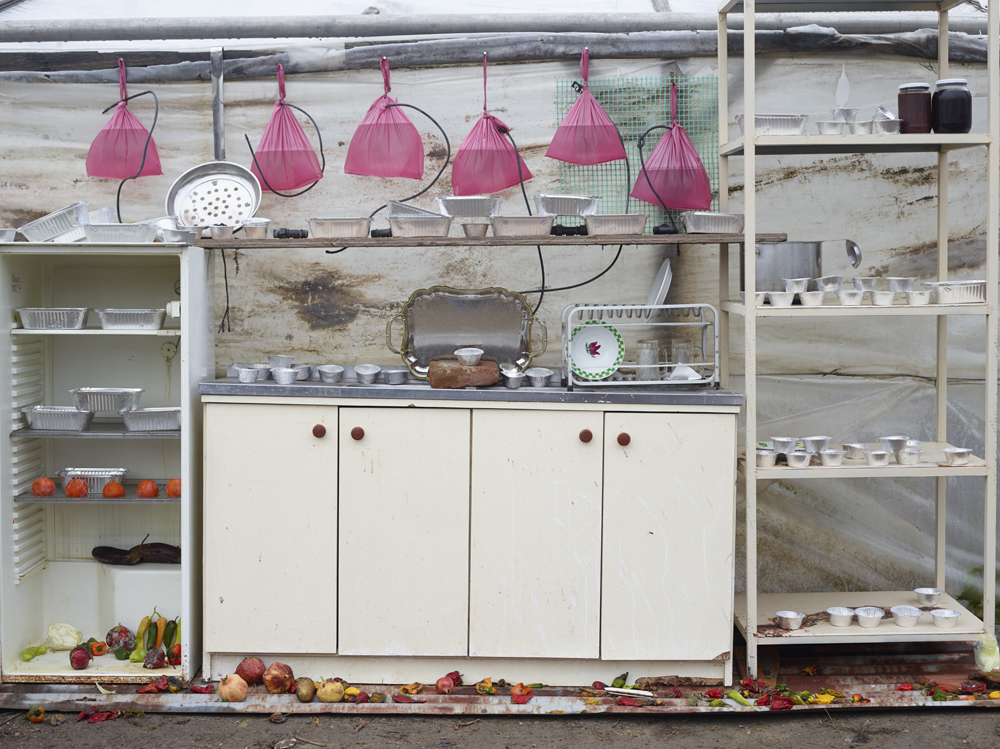 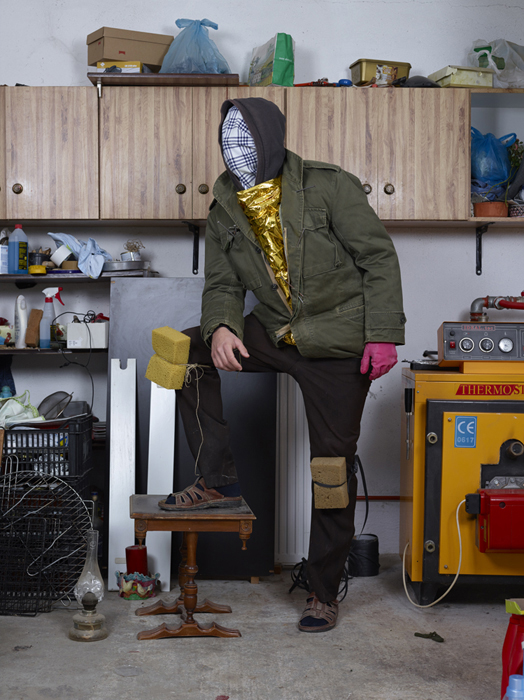 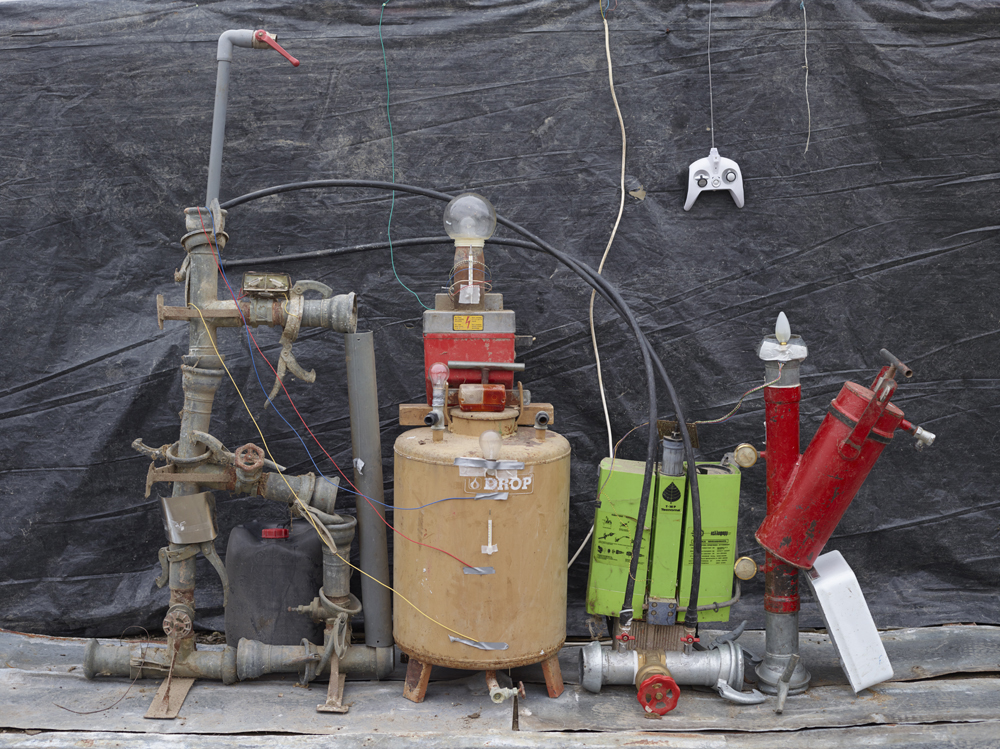 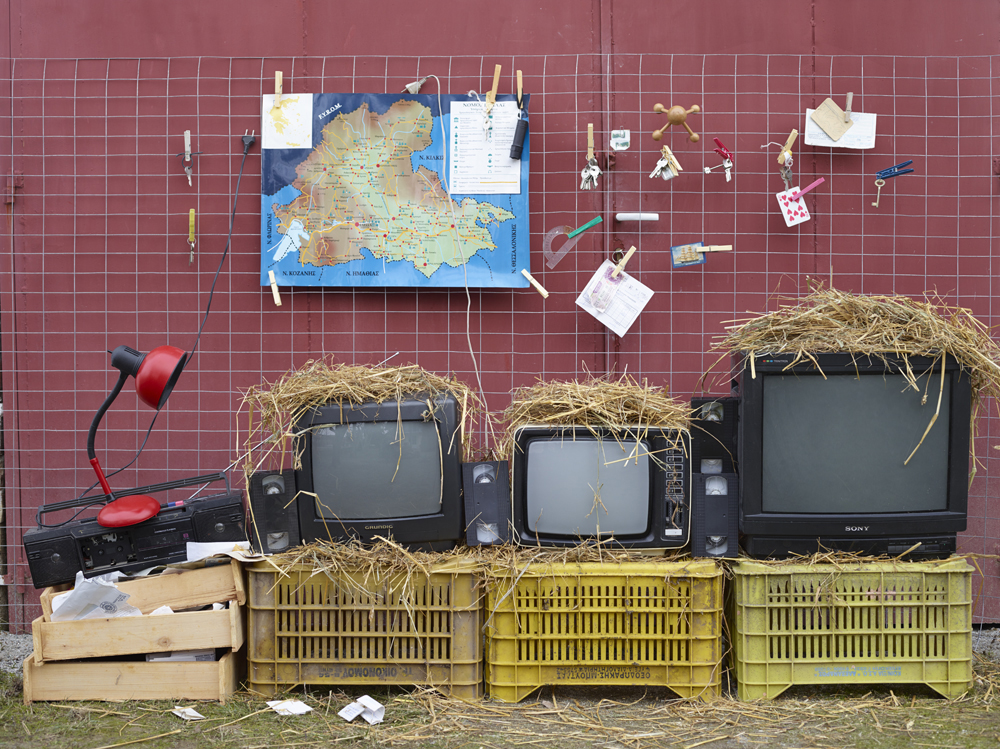 After his previous series featuring poetic objects of revolt (Eggs, Ropala, Bombs, etc.), the photographer has chosen to address the social context in his home country – once the cradle of Europe and now its reluctant political and economic laboratory. The artist embraces the methods of opponents forced to get by with makeshift means. For him, ready-mades are dictated by criteria of colour, composition and ultimately poetry, rather than anticipated danger or effectiveness.

In this world, transfigured by the photographer’s hand and eye, we encounter codes and images that are familiar or recently discovered: the prison environment and its extreme economy, as evoked in Robert Bresson’s film “A Man Escapes”, or the silhouettes of protesters seen in the media, shot on Kiev’s Maidan Square some time after the ones on Athens’ Syntagma Square.

Raphaëlle Stopin You have chosen to root your photography in your native village, located in the North of Greece, in the Balkans. Could you tell me about the place? How has it changed over the last years and accordingly how has your relationship to it changed, if it has?

Petros Efstathiadis It’s small village in northern Greece, not the kind of place you’d put on a postcard to attract tourists. The mentality of a village – a very small society – can be exciting when you are very young but after that nothing changes, so the excitement deflates rather quickly, as nothing new happens. People’s lives are repetitive year after year, doing the same small things day after day like a clock. An almost absurd discipline: small things are important and fulfilling. My relationship to the village has not changed apart from the fact that not living there any more makes me more objective and more grateful for the surreal uniqueness of this place.

RS In your very early work you photographed relatives and neighbours posing as heroic figures or fantasy characters in front of a plastic canvas serving as the studio backdrop. From these portraits, you moved to mises-en-scène involving sculpture and history. You started to build weird machines such as cannon and a whole range of artisanal bombs, as colourful as they are inoffensive. How did these poetic objects of protest come about in your work ?

PE My very first mises-en-scène, the portraits you mention, arose from my obsession with the stereotype of the photographer at the beginning of the age of photography. I found one image of my grandmother taken 80 years ago which was made in front of a dirty backdrop by a travelling photographer. Almost a century later it felt familiar and related to my ideas. I know that my backyard portraits are very much influenced by the simplicity, honesty and originality of that portrait. It was as if it had the power to create a continuous line through history.
My images are fictional and I try to take a distance from simply documenting my village or my country, but real life itself is evolving into something my photographs talk about. My weird machines are like part of my nature as much as part of my country. They make my narrative more precise and enable me to shift the meaning of a bomb, a cannon or a soldier. I am attracted by certain historical, social and political events and then I get excited with my wish to construct a microcosm around them. I have a sense of history, maybe because I was brought up with the image of heroic acts.

RS Your latest works are increasingly sculptural, this time in relation to the human figure. You have moved away from portraiture and towards the creation of monumental figures, totemic guardians all draped in some sort of absurd custom-made armour. In front of these characters, you have built intriguing environments, creating a new sense of confinement. You have chosen to frame the subject more closely, making the village behind it invisible. The interiors shot by Walker Evans during his FSA campaign during the Great Depression come to mind.
Can you tell how these two bodies of works, the guardians and the environment, relate to each another?

PE When I posed a boy dressed up in tinfoil like an amateur spaceman six years ago my intention was to make a heroic narrative, an odyssey. That was the first totemic guardian I sent in to space. It’s more like an evolution of that and to keep my ideas uncompromised that I “built” these heroes. The situation in Greece and the rest of the world is compelling and makes me want to speak out more, at least with images. I don’t live in a bubble and I can’t just sit on my sofa and not get dirty or be part of my army.
Walker Evans’ work from the time of the Great Depression now looks strikingly contemporary. I’ve been to places suffering serious economic depression and I was not there as a tourist. I can feel what’s there in Walker Evans’ pictures, there are many corners and walls in Greece and elsewhere in Europe that remind me of those miserable shelters he once photographed. In my later works, you could say I’m showing a similar story in the present time, with more colours.
The “lohos” photographs are about figures in the middle of a battlefield ready to fight what’s there. The prison is the scene of this battle, an improvised prison for improvised fighters.

RS Your photographs stand somewhere between tragedy and comedy, as well as between rawness, faked approximation, and true richness in the details and materials used. How do you manage to work on this thin line? Could you describe your working process, does it involve some sort of scenario or sketches?

PE All my photographs come out of an attraction to specific historical events. I have certain obsessions. I make storyboards and drawings and if an idea stays in my mind for some time, and after doing my research and I’m still excited, I construct it, I collect objects from my neighbours’ attics, and sometimes I go to the countryside looking for objects. Now I find it easy to know what suits my photographs and what does not. I have some favourite objects which I use again and again. Most of my objects are dirty, rusty, heavy. Once everything is ready I wait until the light is perfect. I take the photograph and then I put everything back. And move on to the next one. To be more effective and true to the nature of my thoughts, I have to follow certain rules, use specific objects and locations and layers and necessary details. I have to do things raw but not fake. In order not to lose the rawness of my constructions, I must do things instinctively. I immerse myself in the place, imagining there is no electricity, no internet, no technology and that I have to improvise and build everything with my own hands.
For example, in this picture I call the “kitchen” I had to find a way to get all these things from one place to another without a car or any help. I had to remember how people moved stones to build the pyramids.
Once you are alert you can find a way to do anything. Because everything is pure and instinctive, it can become colourful and detailed, funny and serious, logical and absurd: schizophrenic.
It’s always a thin line as you said, which I love to walk.

RS I know you are rather sceptical about wrapping your work into analytical discourse, but you do acknowledge a concern for your environment that your work reflects. To what extent are your absurd fantasies documents?

PE Obviously, there is a documentary element in any idea which comes from reality. Although it’s full of fantasy there is an event and story behind it.
I would say that in my most recent photographs I am heading towards photography which is about fictional symbols, fictions I want people to believe in. I want the pictures to bring the viewer into an ambiguous dimension, to lead him to the conclusion, quite against logic, that these scenes are truthful.
As a matter of fact, truthfulness is a very relative notion. What is an absurd and extreme fictional symbol for someone living in London might be routine somewhere in Africa, Latin America or the Balkans. For some people this is exotic and a million years from their reality but for others it is nothing more than everyday banality.
From time to time, I get caught up in this seeming reality that I build: I imagine and make artisanal bombs out of soap, string and daisies and later on, a bomb explodes in Athens. I create silhouettes with masks, got up with any old thing, and two months later, when I turn the TV on, I see them on the Maidan in Kiev.

A graduate of the University of Creative Arts, Farnham (Great Britain), Petros Efstathiadis lives in his native country, Greece. He featured in a group show at Xippas gallery in Athens in 2009 (“Realities and Plausibilities”) and in 2011 at the Ego gallery, Barcelona (Where the wild ones are). His work has been published in Wallpaper* and Monocle.
In 2013, he won the Grand Prix of the Photography Jury at the International Festival of Fashion and Photography in Hyères. As a result of this, his first solo show was held at the festival’s 2014 edition. His exhibit, entitled “Kipseli”, showcased photographs and videos, the works presented in this online portfolio.