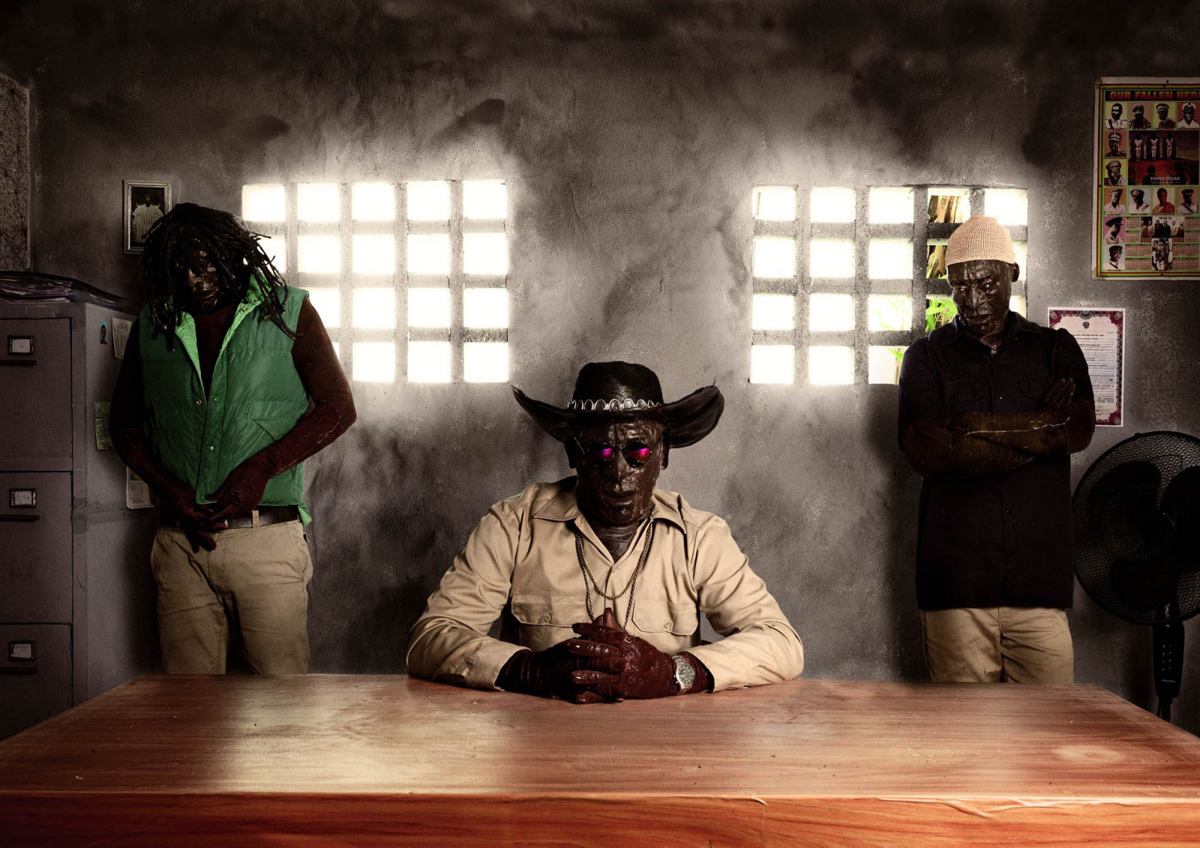 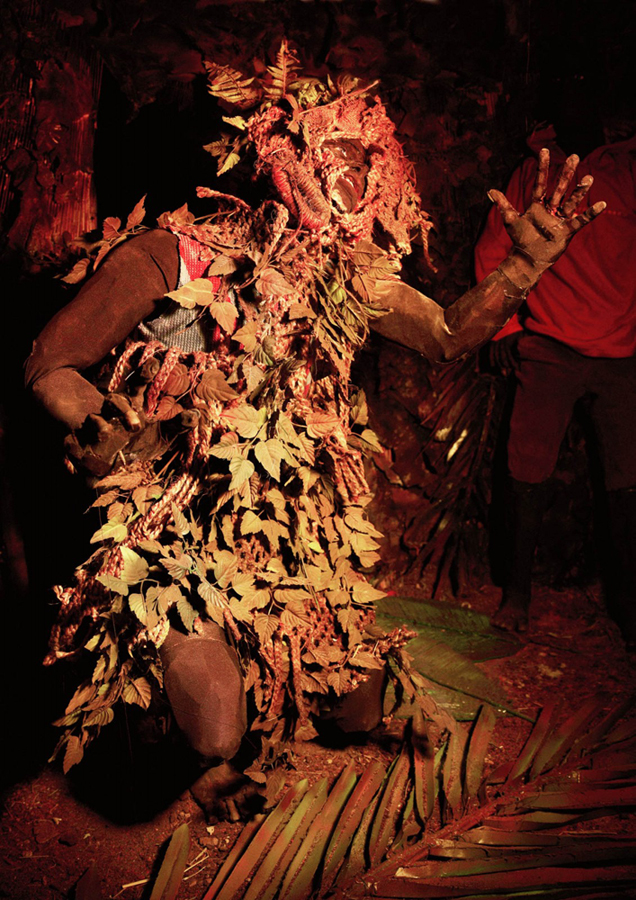 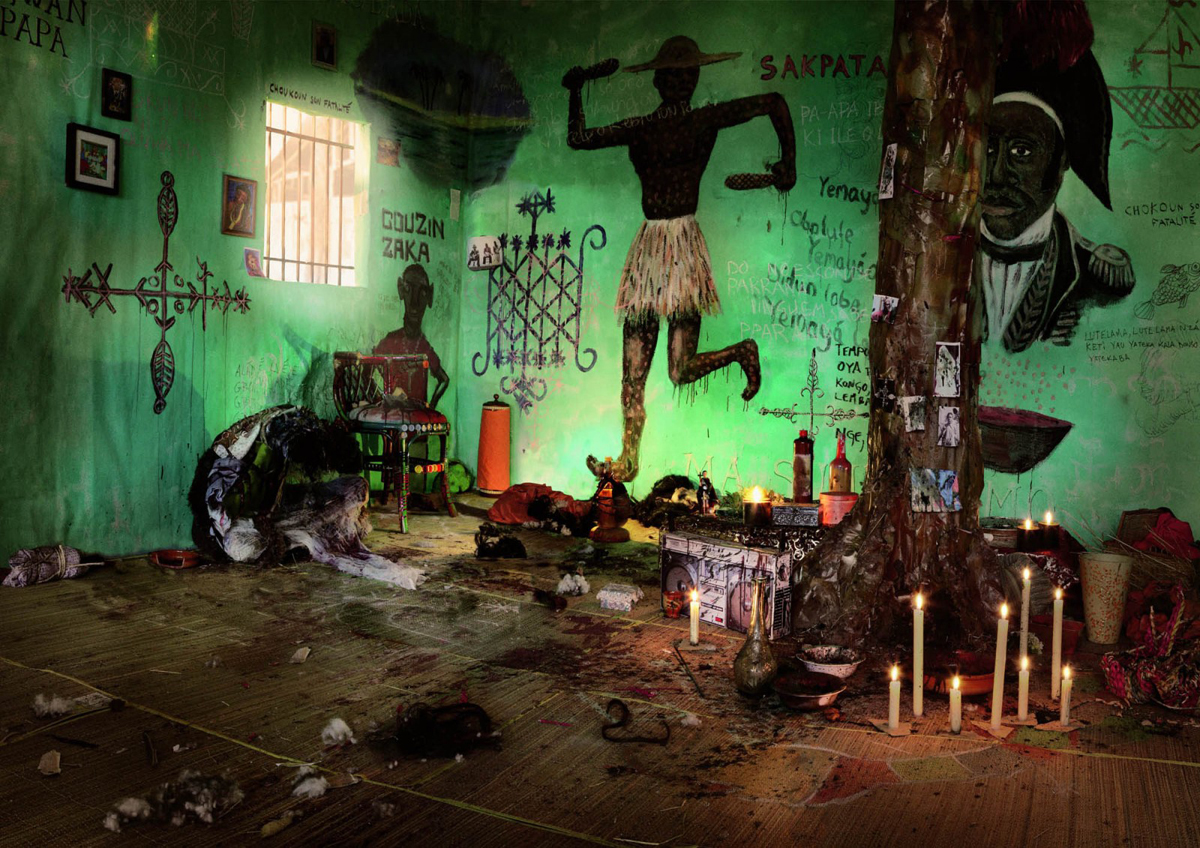 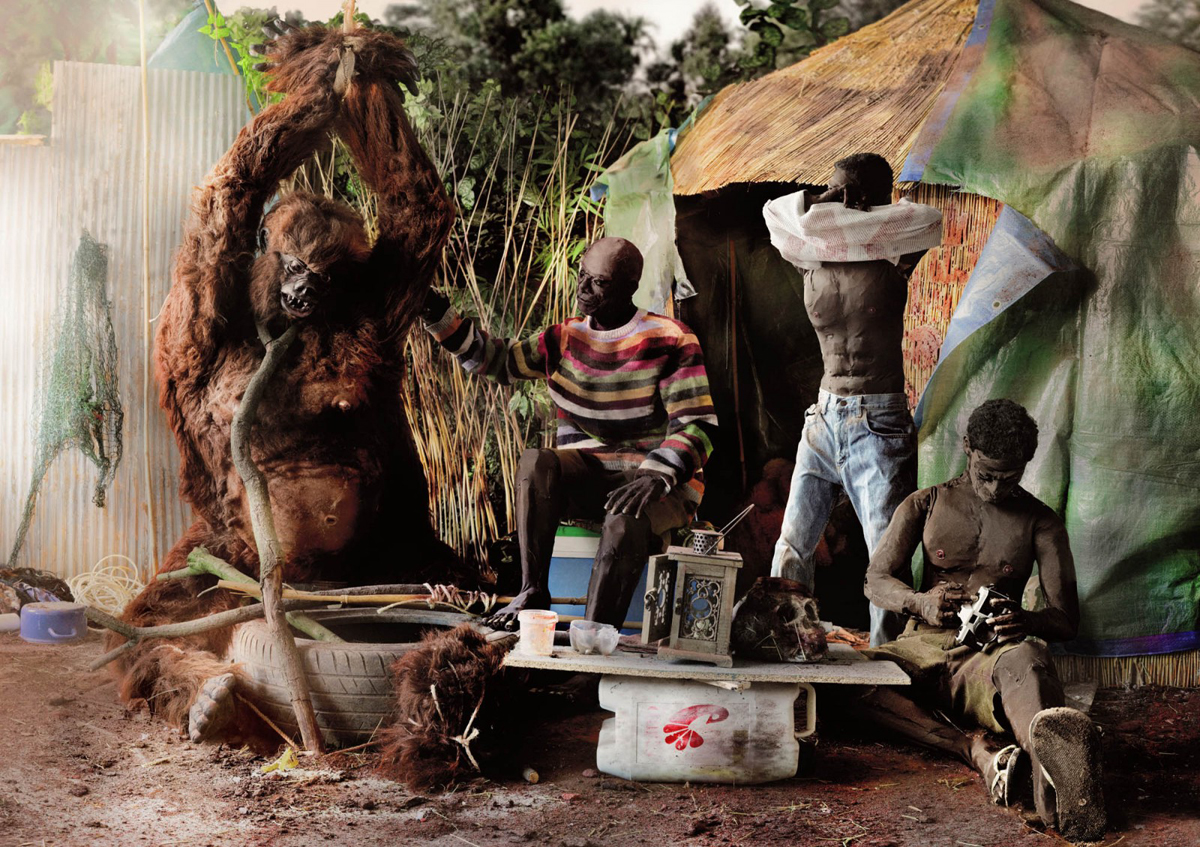 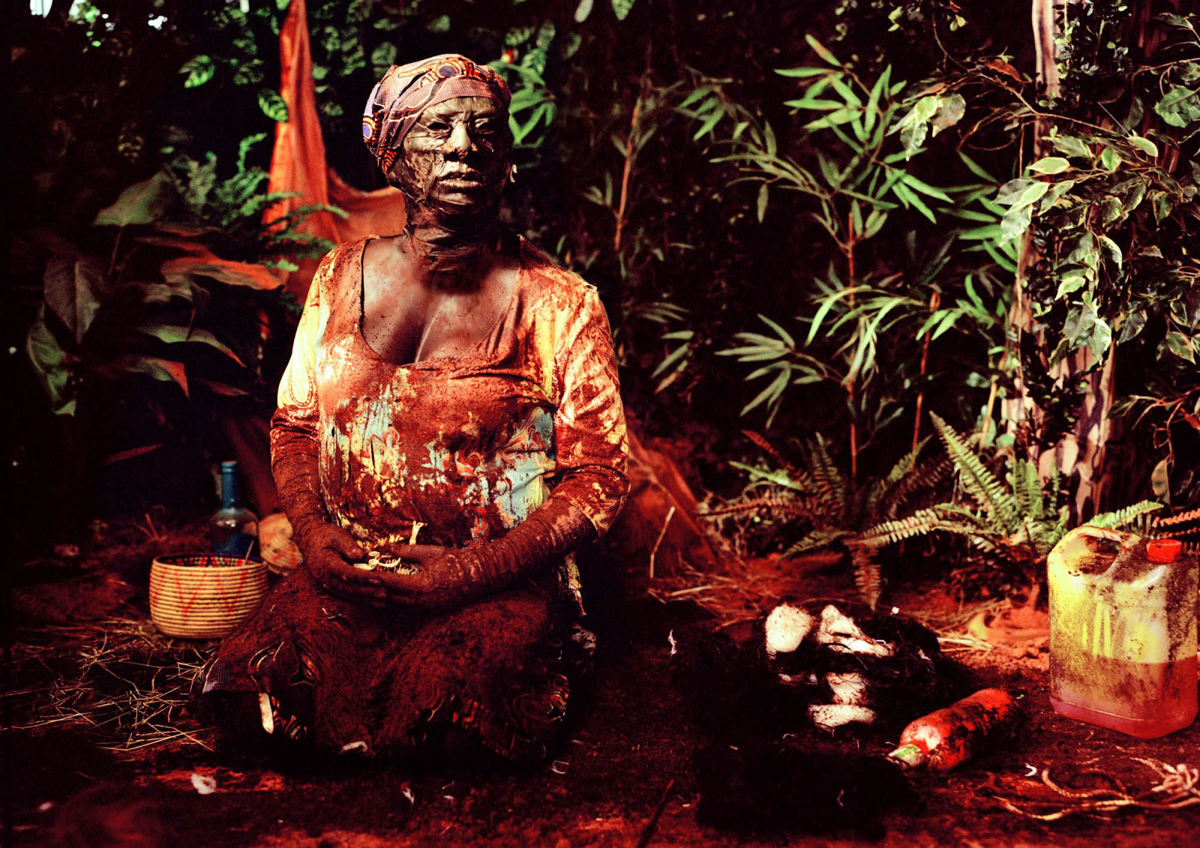 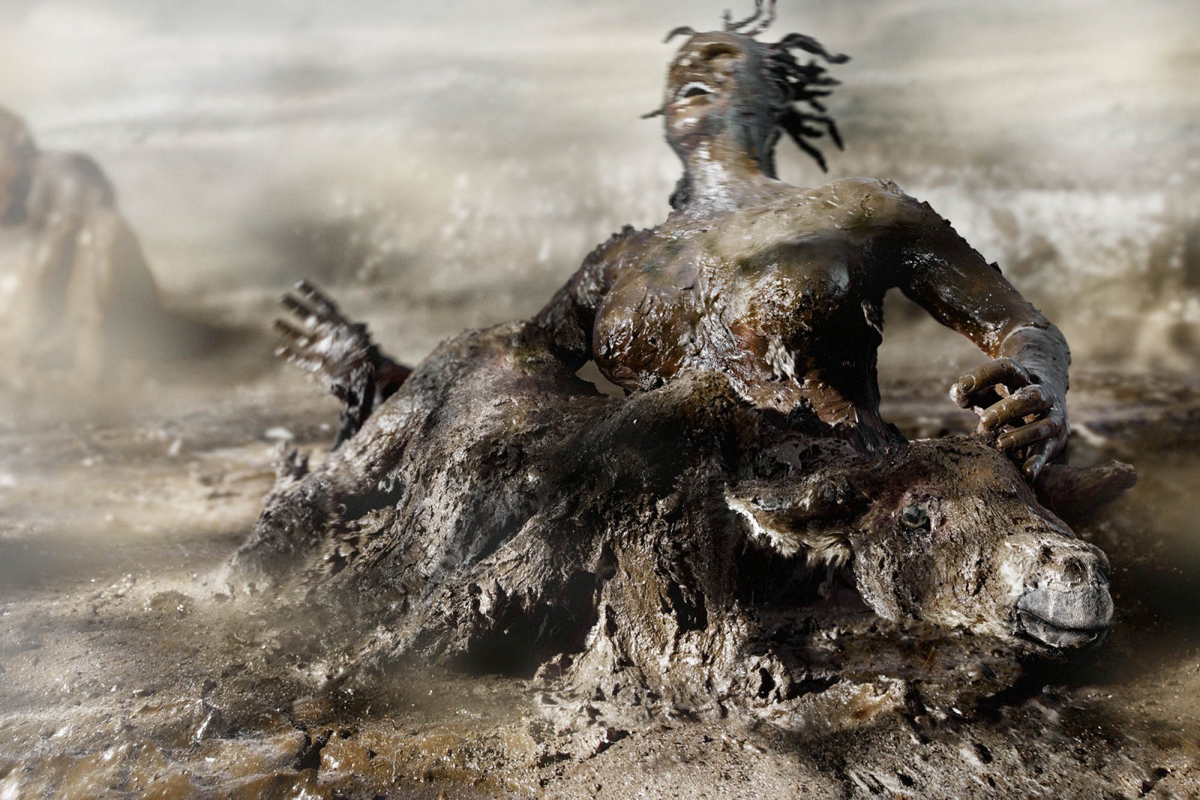 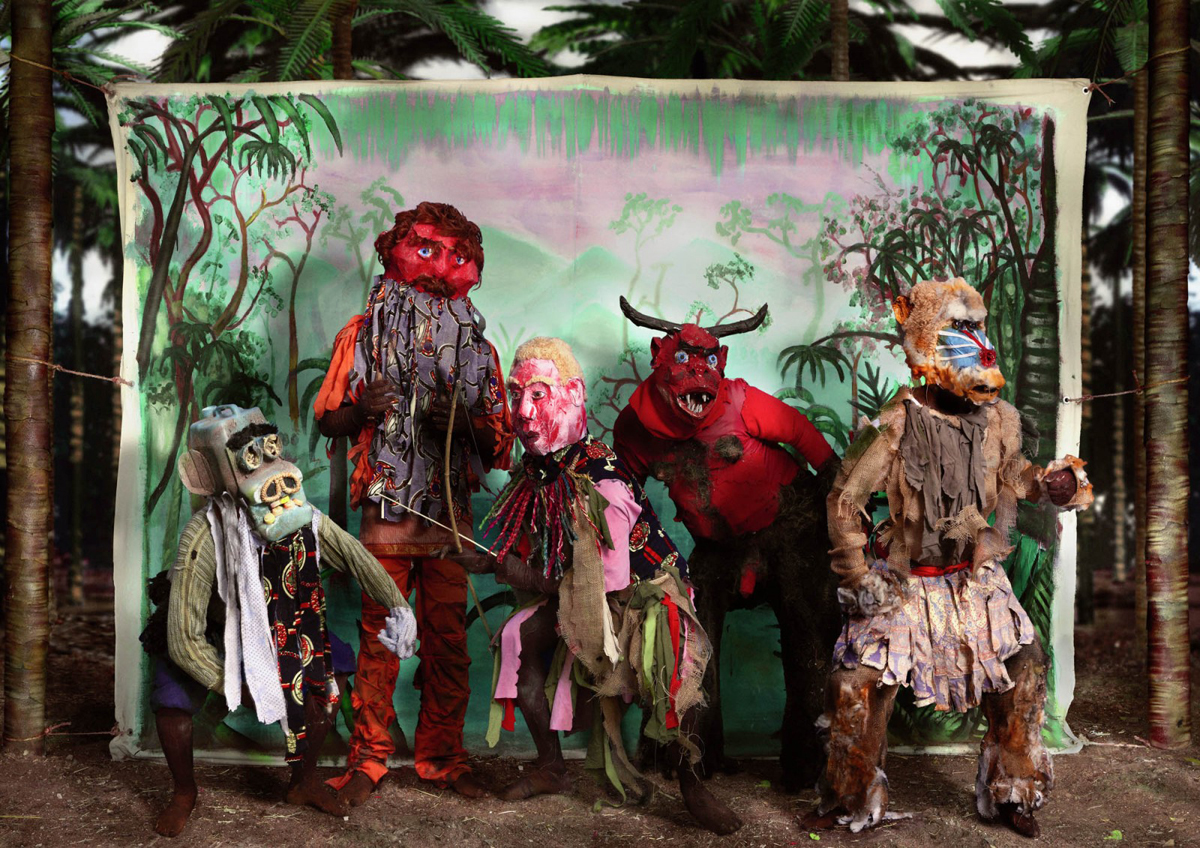 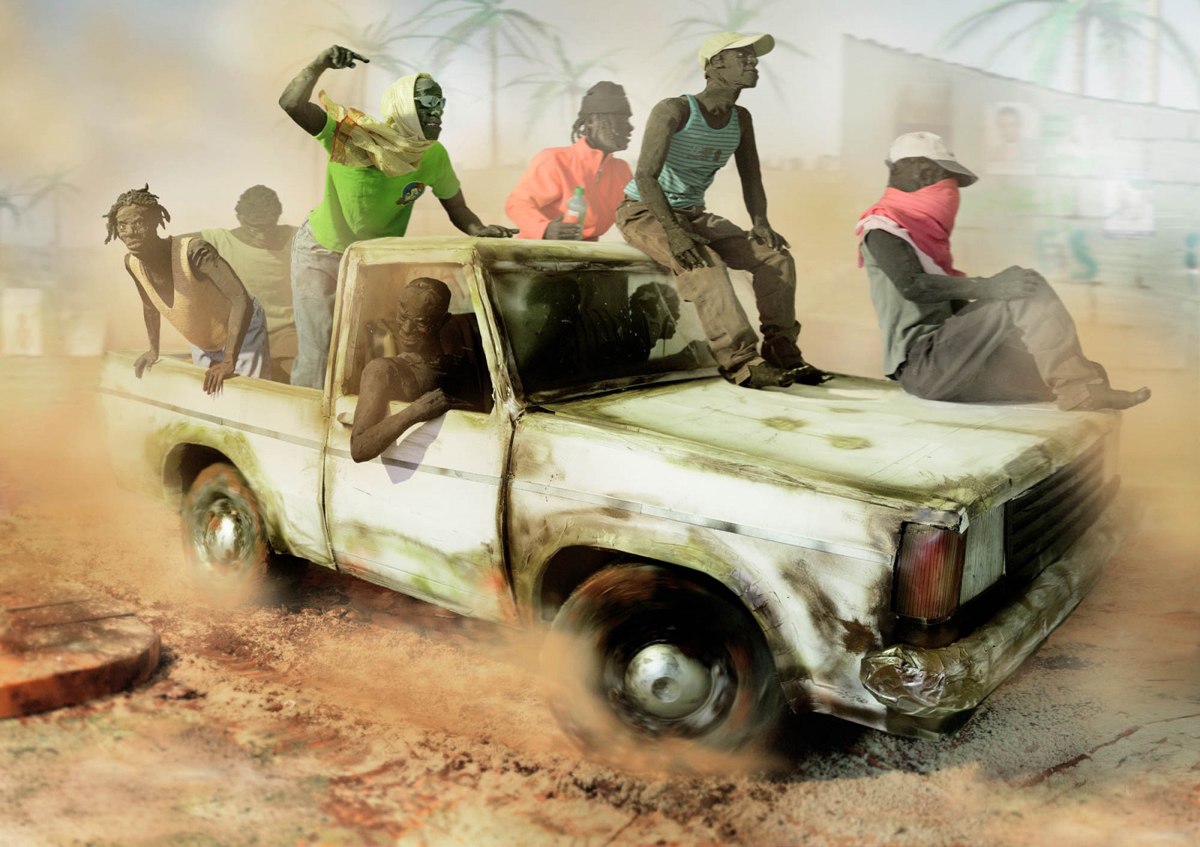 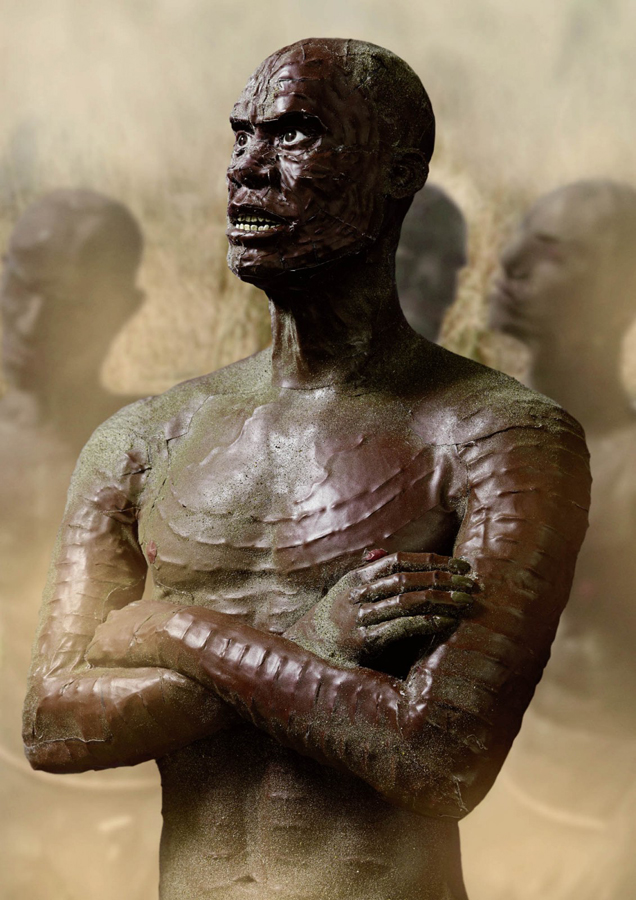 Ever since his early work at the turn of the 2000s, Jasper de Beijer (Netherlands) has been concerned with the question of representation, with the image as an essential element in the construction of history and as a vector for mythology and cliché. Although his main medium is now photography, Beijer has also used drawing and sculpture. For Udongo, shown here, the artist cobbled together pictures in his studio, images that point us to the necessarily fabricated and simplistic images we have of a territory that is as vast as it is complex: Africa.

Raphaëlle Stopin Let’s first give an idea or reminder of the series preceding Udongo, to put it in the broader context of your work. One of your first series, Buitenpost, explores the territory of Indonesia, obviously linked to the Netherlands by its colonial past. Then came The Devil Drives, based on the narration of a trip made to the African Great Lakes region by the explorer Richard Burton in the 1860s. Immediately after that you crafted the Cahutchu series, which recalls the glorious past of Manaus at the time of the rubber industry during the second half of the 19th century.
Then came Heroes and Ghosts, which triggers the image of Japan, Le Sacre du Printemps, unfolding scenes of World War I and finally The Riveted Kingdom, evoking the great age of industrial invention in United Kingdom.
As diverse as these subject matters are, in terms of the culture and the time period they are rooted in, they are all subjects with a strong visual mythology, be it that of the colonial farmer, the white explorer or the Japanese warrior. They also share a sense of times that are definitively lost, times of empires which were about to collapse, times of grandeur and decadence, that could remain in our minds for decades and centuries only through enduring imagery.
Given that each of these series reassess existing imagery, are images always a starting point?

Jasper de Beijer Not always. Sometimes I am triggered by travel reports or (a series of) objects in a museum. And sometimes I see a documentary that is so unbelievably bizarre that it is hard to believe it is the truth.

RS As I said previously, your work involves a variety of practices.
Can you go back over your artistic background and how you first came to use photography?

JdB I was actually a sketch artist, making large drawings that were quite suggestive of nature. I started using scale models as a reference for the drawings. Then I realized that the suggestion of looking at a photo always implies a kind of testimony. I suddenly understood that I could present my fantasy worlds as testimonials of non-existent places or phenomena.

RS The actual creative process for each of your images is very long, from the time spent documenting, then physically crafting this imaginary world, and acting it out, to assembling the different materials (photographs, patterns from internet) and composing the final image on the computer screen. How important is time in your creative process – the duration of the making?

JdB The time it takes to get it transformed into an image is often too long, but it needs time to ferment, so to speak. Once my imagination starts working with a certain kind of topic, it means that at the end I will be inside this imagined world. It’s like building a ship; you see yourself sailing the waves, but in the docks there is a static massive object that needs to be dragged to sea at the end of the building process. And everything that felt so lumpy and heavy to handle in the beginning is suddenly at sea, where all those elements fall into place and the big lump of steel becomes weightless and every part serves its purpose. That is what I feel when I look at the first prints in the lab.

RS Once the idea is established, and you have your documentation, do you go on site – in Indonesia for Buitenpost, or Africa for The Devil Drives – to compare the imagery to today’s reality, or do you stay within the fantasy of these old worlds?

JdB That depends. In the first place my starting point is that I don’t deal with reality, but the residue of it. For most people this is reality, because it is the only thing they get to see. I know that it is only one angle we are looking at. To that extent I am often dealing with Baudrillard’s simulacrum theory. It’s funny, they always talk about Plato’s cave, but the shadows are just Indonesian puppet play. Forget reality and enjoy the interpretation.

I do travel to a lot of places that play the lead role in my work, but I know that it’s impossible to catch reality and put it in a jar. When you pin the butterfly to the cardboard it is suddenly a decorative piece, and you can’t imagine it flying any more.

RS Does the confinement of the studio help you to achieve this sense of alienation that most images share, of a world actually shaped by the limitations of the image?

JdB Absolutely. I need to be alone and fed by the information I need, and to build layer after layer until it looks like a more purified and filtered version of the part of reality I started with, at the same time getting alienated from it.

RS In Udongo, as well as in the latest Marubunta (on the Mexican narco crime scene), you are dealing with today’s imagery.  The mythology of these territories is much more recent, and certainly less powerful in our minds. This is not a literary mythology, but something purveyed by media, news, and film culture.  How did you shift from historical subjects to modern topics? Do these works respond to some sort of concern on your part with how we (media society) maintain a sort of colonial age by narrowing down these “exotic” territories into the clichés we build about them?

JdB In some sense it is just modern history. History (as it is told and passed on) is a series of nicely bundled packages that have clear connections with each other, like cause and effect for instance. If we don’t do that, history becomes chaos with so many factors influencing it that there is no logic in the story. But in reality history has no logic and the cause and effect are far more complicated than we think. The media can be compared with writing history; they make packages that are easy to swallow and they try to pinpoint the relation between events to make it understandable. In that way history and the media have that in common: they write a saga, with good guys, bad guys, stories with bad or happy endings. But this is not the way the world works.

RS With some of your series (Le Sacre du Printemps, about World War I; The Riveted Kingdom and the very recent Wir sind das Gedächtnis, on the great monuments of Germany which were torn down during World War II and that you imagine rebuilding with sundry found material) you approach a territory that is much closer – both geographically, culturally and historically speaking: Europe, in the 20th century. Was the remoteness of the places you first explored (Indonesia, Manaus, Africa etc.), and the exoticism it carried with it, something you need in order to achieve the right distance to build your own fantasy and image? Did these works help you question the imagery of our modern culture more precisely?

JdB You have a point there. In the beginning of my career it was much easier to put exoticism in a jar and study it. Now I know that this mechanism works the same everywhere, from my doorstep to the dark jungle of the Amazon. I am very happy that I am not a scientist who has to explain the wonders of the world. I can just lie back and enjoy the narrative, disregarding the truth. Scientists say there are eleven dimensions. So what kind of reality can we derive from only four?

Jasper de Beijer, based in Amsterdam, is a graduate of the Amsterdam School of the Arts and of the Autonomous Design programme of the Utrecht School of the Arts. His work has been presented in numerous solo and group exhibitions, and is included in a large number of collections, including those of Bank of America and Rabobank. Institutions that have exhibited his works or that represent him as a gallery include The Hague Museum of Photography, the Museum of Contemporary Art Denver, Museum Het Domein (Sittard), Asya Geisberg Gallery (New York), Galerie Nouvelles Images (The Hague), Galerie TZR (Düsseldorf), Hamish Morrison Galerie (Berlin, Germany) and Studio d’Arte Cannaviello (Milan). De Beijer’s work can also be seen at major international art fairs like PULSE New York, SCOPE Miami, photo l.a. and other events.