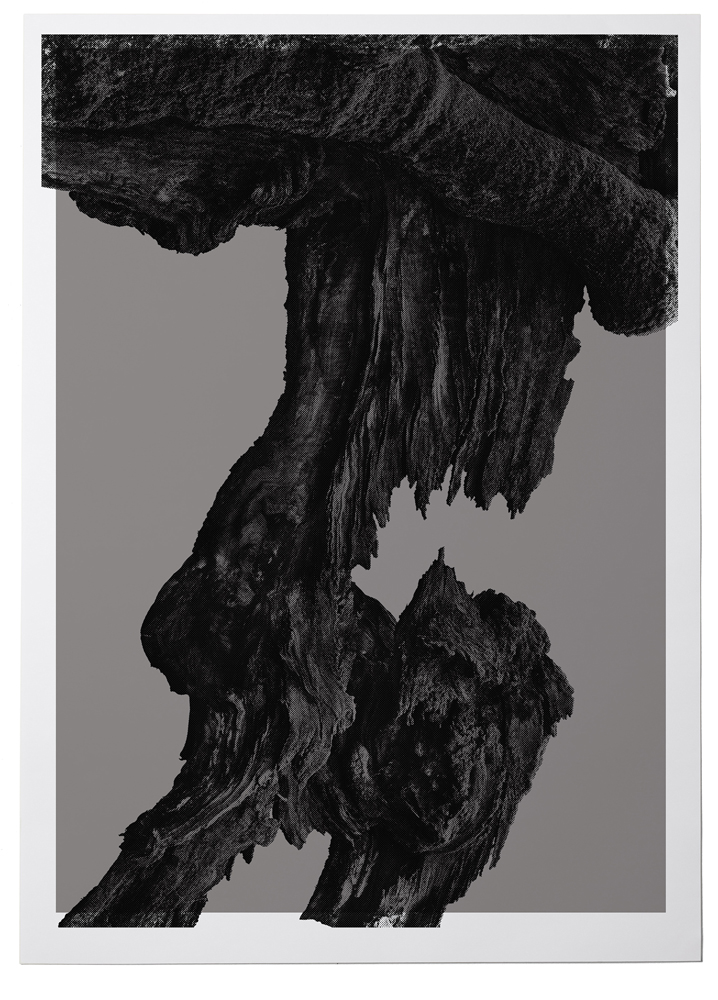 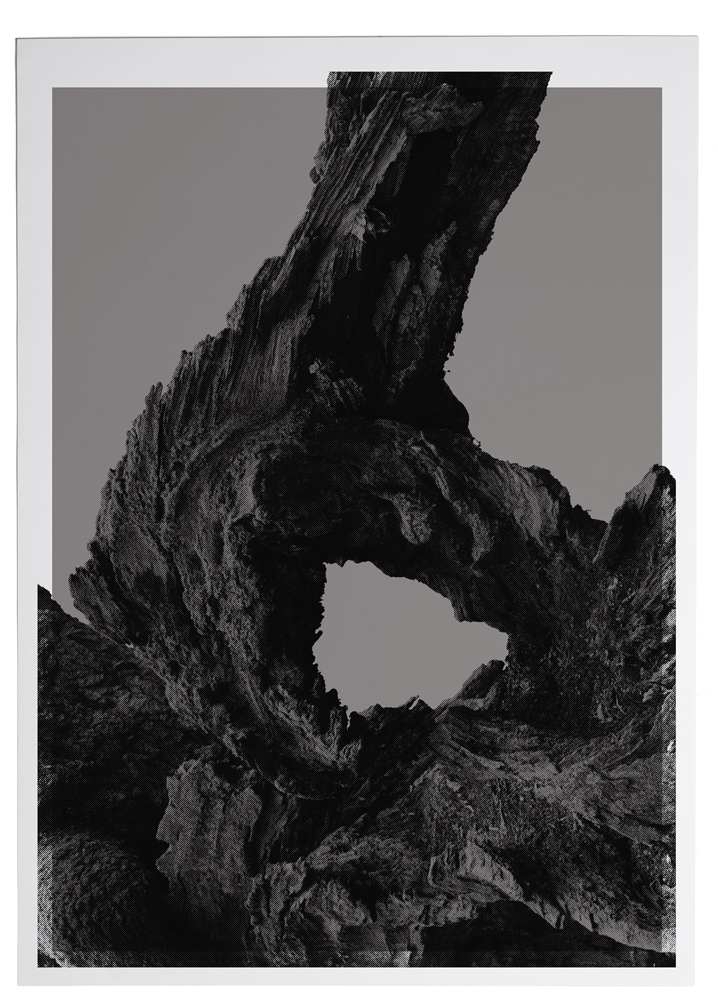 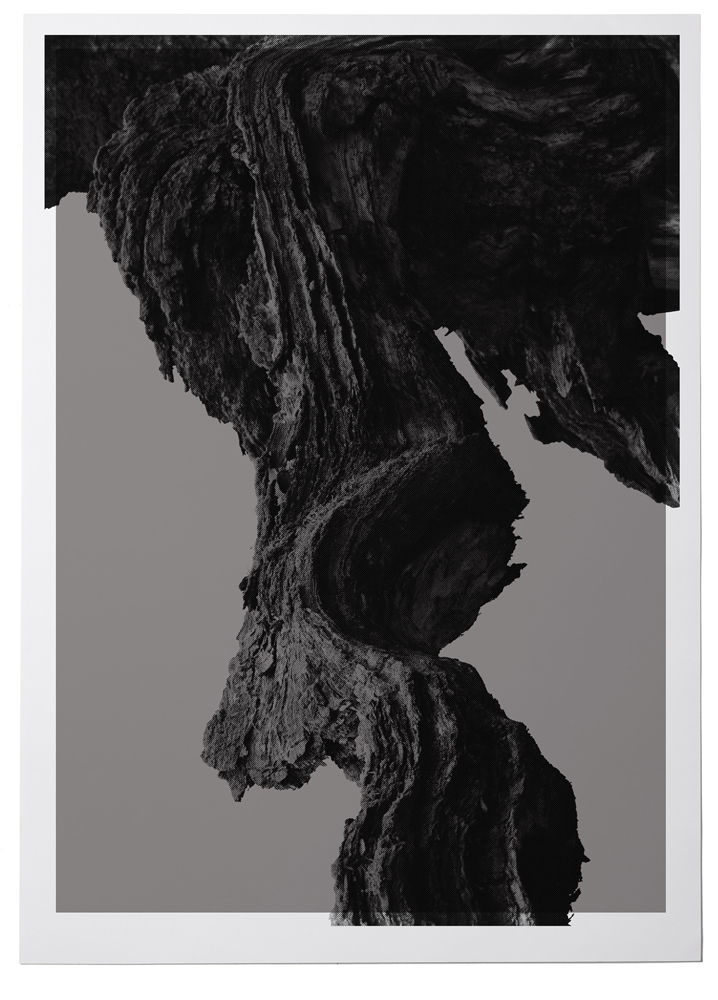 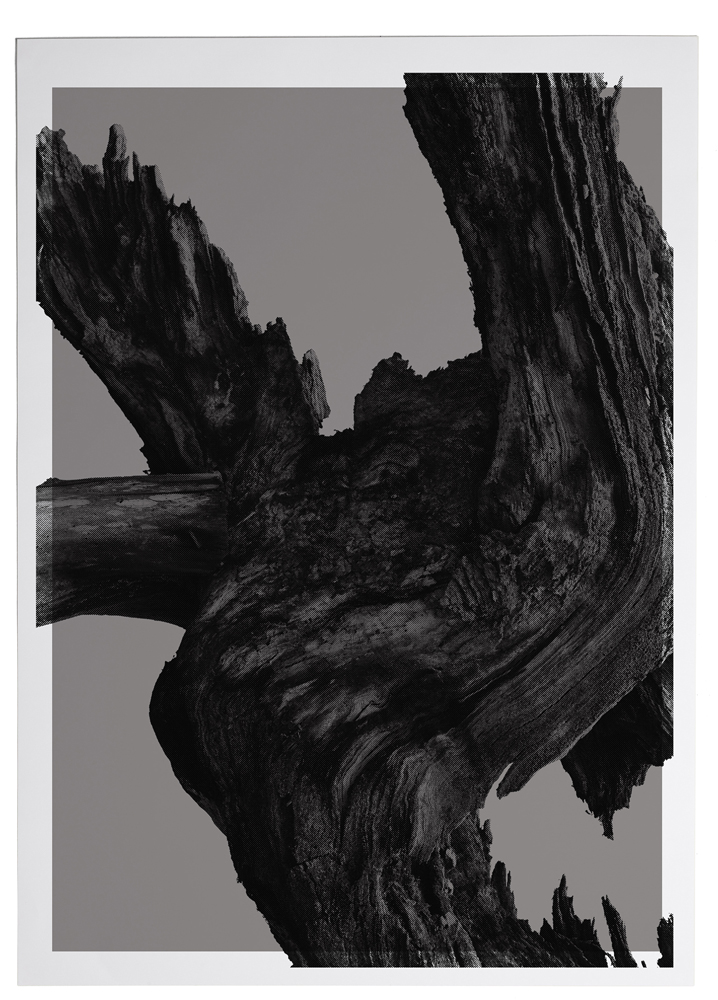 Danish artists Trine Søndergaard and Nicolai Howalt are presenting Megafossil. In this series, which unfolds over four massive panels, the artists explore a monument of the Danish landscape, which stands in the woods of Jaegerspris, north of Copenhagen.

Raphaëlle Stopin In an earlier series, How to Hunt, you explored the idea of the territory, as a space to be explored and experienced. This series was deeply rooted in your own country, Denmark. With Megafossil you are again exploring that national territory, albeit on a different scale. How did this project start?

Trine Søndergaard et Nicolai Howalt The Megafossil series has a historical starting point. We began by working with the images connected to the exhibition “Shaped by Time” at the National Museum of Denmark, 2012. We were invited by the museum to research and respond to the prehistoric collection, which is composed of historical artefacts from the end of the Ice Age to the Viking Age. Anything between 1500 and 2000 years old, and located in the Jaegerspris woods, the “Kongeegen” or “King’s Oak” is one of the oldest living organisms in Europe. We were fascinated by its connection to the past and the idea that it represents a direct link to the past.

RS How did you come to decide on a minimalist four-panel portrait, focusing not on the tree’s imposing stature but only on details, with close-ups of its thick and cracked skin? Why did you choose this visual synecdoche (as these four parts represent the whole) as a way of grasping your subject?

TS & NH Megafossil examines the concept of time. Standing in the presence of the King’s Oak there is a sense of connection with history. The tree is a witness to the passing of time and an image of something larger than us. Monumental in size, rich and immense in detail, the tree reminds us how small we are and how brief our time here is.
By focusing on parts and sections of the tree we wanted to take the tree out of context, away from its natural environment and into the museum space. We wanted to look at the tree in isolation, not only as a piece of nature, but also as an object.

RS You have chosen to print these photographs on wood using the silkscreen process, which implies overlapping layers of different inks, and therefore the presence of various strata on the paper. Was this an attempt to get closer to the physicality of your subject, to recapture a texture that a photographic print cannot convey?

TS & NH We wanted to look at the tree outside its forest, away from its natural environment. Cut out, it stands alone and the silkscreen process reinforces this method. Unlike photographic prints, our silkscreen prints have more than one layer. Printing the different layers of grey and the details of the tree on wooden plates enhances the physical presence of the tree.

RS In the final presentation of the work, you have included a branch from the tree. Why did you choose to complement the image with this real part of your subject?

TS & NH Installed in the museum space the branch almost assumes the status of a relic. We originally meant to keep it alive for the duration of the exhibition, but due to considerations concerning conservation and sterilisation this was not possible. Before we were able to bring the branch into the exhibition space it had to undergo a process of being frozen for 24 hours.

Trine Søndergaard is a Danish photography-based visual artist who lives and works in Copenhagen. In 1996 she graduated from Fatamorgana, the Danish School of Art Photography. In 2000 Trine Søndergaard received the Albert Renger-Patzsch Award and she has since received numerous grants and fellowships, including a three-year working grant from the Danish Arts Foundation. Søndergaard’s work has been shown in solo and group exhibitions around the world and is represented in major public and private collections, for instance: MUSAC, Museo de Arte Contemporáneo de Castilla y León, Spain; the Museum of Fine Arts, Houston; the Hasselblad Foundation, Gothenburg, Sweden; the Israel Museum, Jerusalem; and the Danish Arts Foundation, Copenhagen. She has completed public commissions for both museums and cultural institutions. Trine Søndergaard has published books with Steidl, Hatje Cantz and Hassla Books.

Nicolai Howalt graduated from Fatamorgana, the Danish School of Art Photography, in 1992. His works have been shown in numerous solo and group exhibitions in Denmark and abroad and are held in major collections and museums, including La Maison Européenne de la Photographie, France; MUSAC, Museo de Arte Contemporáneo de Castilla y León, Spain, and the New Carlsberg Foundation, Denmark. His books include 3×1, Boxer, Car Crash Studies and 78 Boxers.