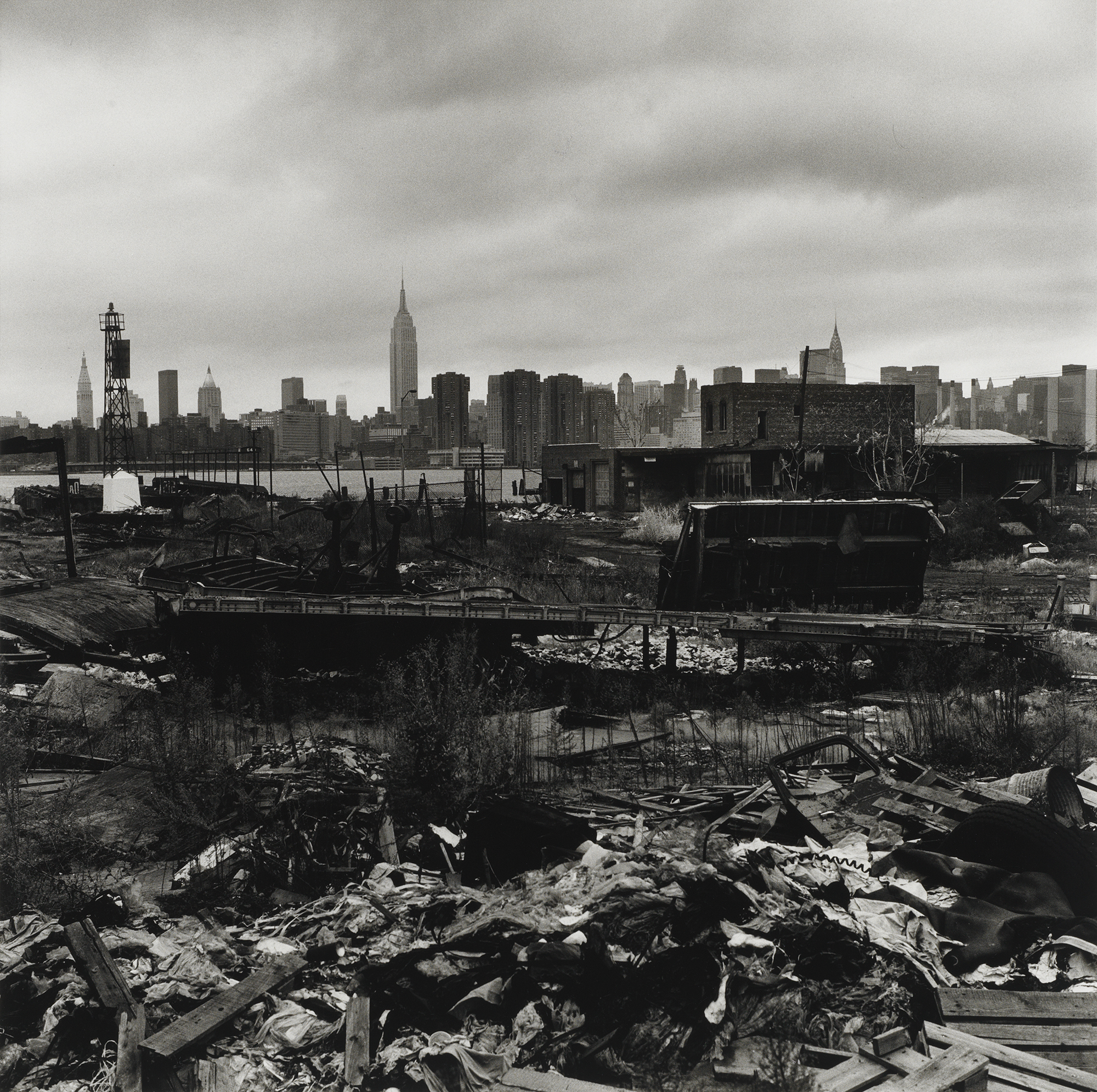 Despite its familiar subject — the New York skyline — and its classic composition, with a clear foreground and background, this photograph by Peter Hujar is disconcerting. The caption says Queens Landscape, but Manhattan lies along the horizon. It is as though the title beckons a break with the usual clichés of this urban panorama, considering it as merely the backdrop of a landscape wholly concentrated in the abandoned, chaotic terrain of the foreground. Herein lies a question of perception: how might the two parts of the image, seemingly opposed in every way, be viewed together?

Cartier-Bresson’s Fire in Hoboken (1946), which Hujar’s image conjures in terms of content and form, intentionally or not, constitutes a useful element for comparison. In the upper half of Cartier-Bresson’s photograph, the New York skyline can be made out in the hazy distance, while in the foreground, the wreckage left by a fire on the banks of the Hudson offers up the distressing spectacle of collapsed, entangled wooden ties. Through an effect of perspective, this seems to make the city recede, while the eye nevertheless seeks to make it out across this visual havoc.

Peter Hujar’s image, meanwhile, is foreign to any perspective or desire to overtake: the lower part does not reach toward the upper area. To the contrary, each of these extremely sharp sections spreads out levelly—parallel visual worlds, distinguished but not entirely separated by the thin border of the East River. The foreground occupies two-thirds of the image, leading the eye to get lost in the muddle of what appears to be an open-air garbage dump on a former port site. The clear, straight lines of Manhattan lose their precision here. The skeleton of a metal girder traces a horizontal segment without particular depth of field. Wild vegetation rises in the midst of the debris, a paltry echo of the verticality and alignment of the skyscrapers, as listless as the posts and railing supports on the left side of the image. A disused structure is a reminder that the site, despite its precariousness, is not wholly devoid of references to the inhabitable world.

Should this divided image be viewed as two places foreign to each other, connected only by their mutual exclusion? Either the sharp forms of the glass and steel city, or the shapeless abandonment sprouting at its edges? It is perhaps more productive to attempt to consider their depolarized coexistence, even their unity. One place does not negate the other. Just as the dead cohabitate with the living in other photographs by Peter Hujar, here, the hidden or little-known side of the city is in the spotlight—not as its other or its underside, but as its “underground” face, its disfigurement, which both constitutes and embodies it as well.


Étienne Helmer teaches philosophy at the University of Puerto Rico (USA). His work focuses on the economic, political and social thinking of the Greek worlds, and more recently on the philosophy of photography. He is the author of Ici et là. Une philosophie des lieux (Paris, Verdier, 2019) and Parler la photographie, (Mix, 2017).