It all started with the idea to present an online portfolio featuring Greek women artists from different generations whose work relates to that of Klonaris/Thomadaki.

It was not an easy task as not only did the two artists produce a unique and personal body of work, but also co-signing art together as a female couple seems remarkable. Having as a starting point the Cinéma of the Body, a personal film genre they coined, my research soon opened up and led to a series of acquaintances and happy coincidences.


In spite of having studied at IDHEC and EHESS in the late 1970s, around the time when Klonaris/Thomadaki were in Paris exploring experimental film, Antoinetta Angelidi would not cross paths with the two artists until the early 1980s when, together with filmmaker Kostas Sfikas and festival director Dimitris Eipidis, they wished to create an Experimental Film Association in Athens. Angelidi is one of Greece\'s most significant filmmakers as she adopts a very unique and personal style. Her work often shares the same thematic concerns as that of Klonaris/Thomadaki. Both of their work has been presented, side-by-side, in exhibitions and film programs like \"Art Projections\" (2013) in Thessaloniki. 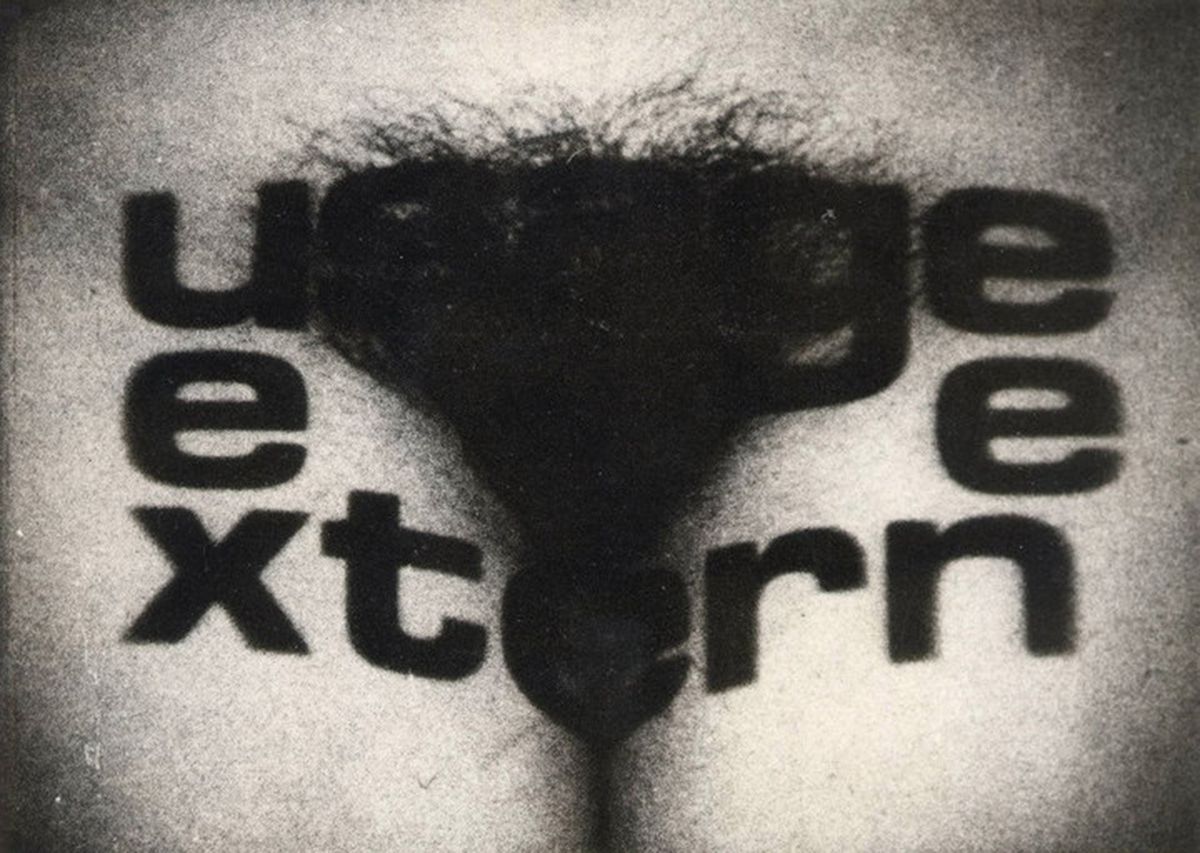 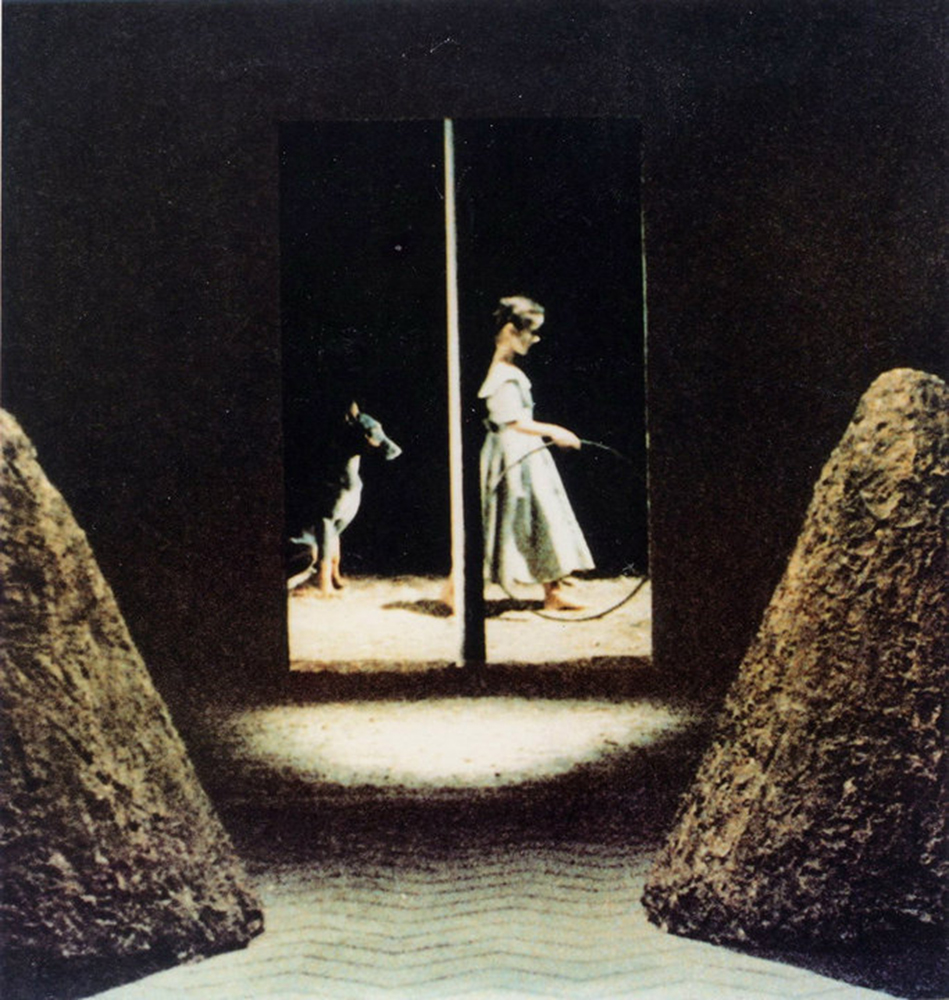 \"Topos\" (Place) - dark, ritualistic and otherworldly - is the story of a lost woman. Through the density of each meticulously staged image, the familiar yet unusual sets, the objects/symbols used as props, the disquieting background noises and the mysterious whisperings leading to an intimate, confidential inner place of mourning, Angelidi puts into cinematographic terms Freud\'s notion of the uncanny (Unheimlich). 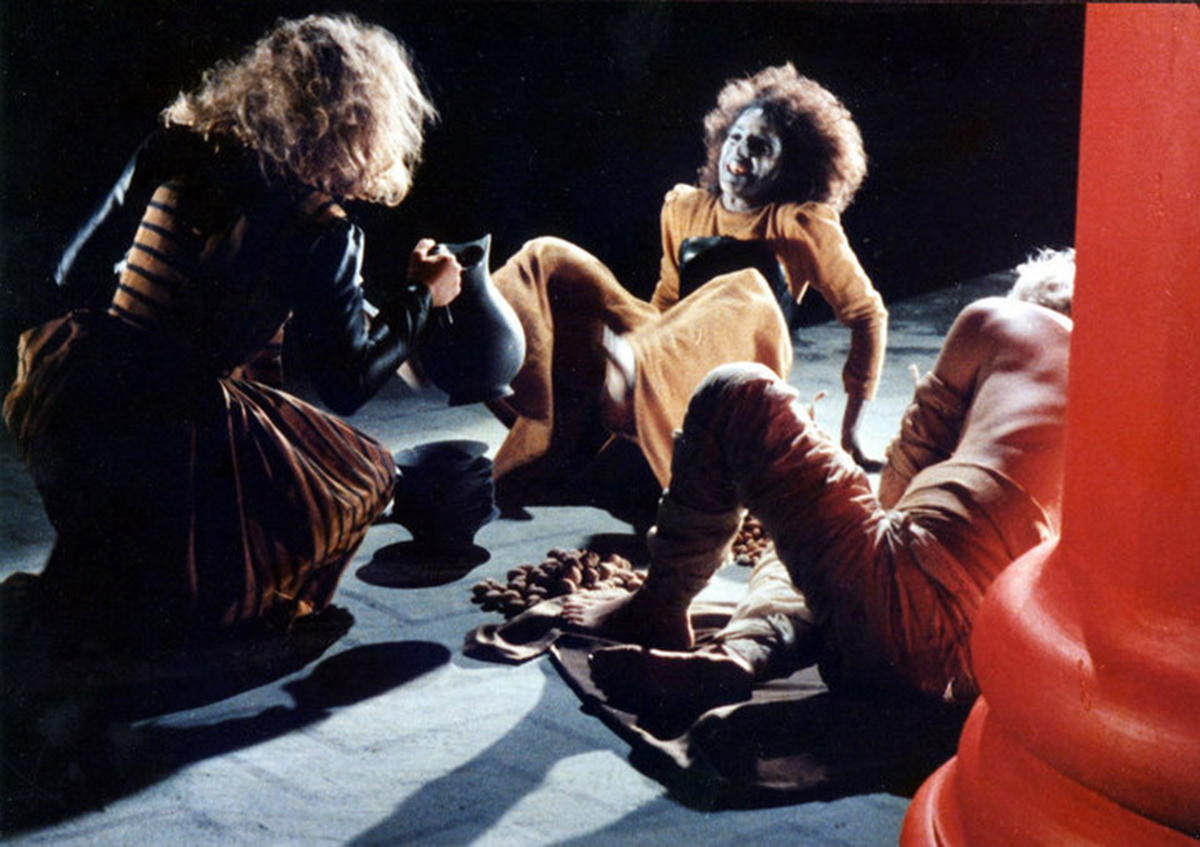 Despina Meimaroglou is a Greek multi-disciplinary artist born and raised in Egypt. After completing her art studies in England, she left Egypt in 1966, due to the political circumstances, and settled in Athens where she worked in advertising as a graphic artist for 10 years before dedicating herself fulltime to her art. From the early eighties onwards, she has established an international career including solo and group shows, residencies and lectures. Her practices span from photography, video, site-specific mixed-media installations, printmaking and self-published artists’ books. Her main concern is the way we perceive and reconstruct reality and otherness through our communication platforms and the media. Her art deals with socio-political issues based on the binary relation of presence/loss and memory/re-setting History. Due to her particular background, being brought up in an intercultural Egyptian society, her own identity has become a vibrant amalgam of diverse traditions and principles that have defined her personal choices and have penetrated her artistic work. 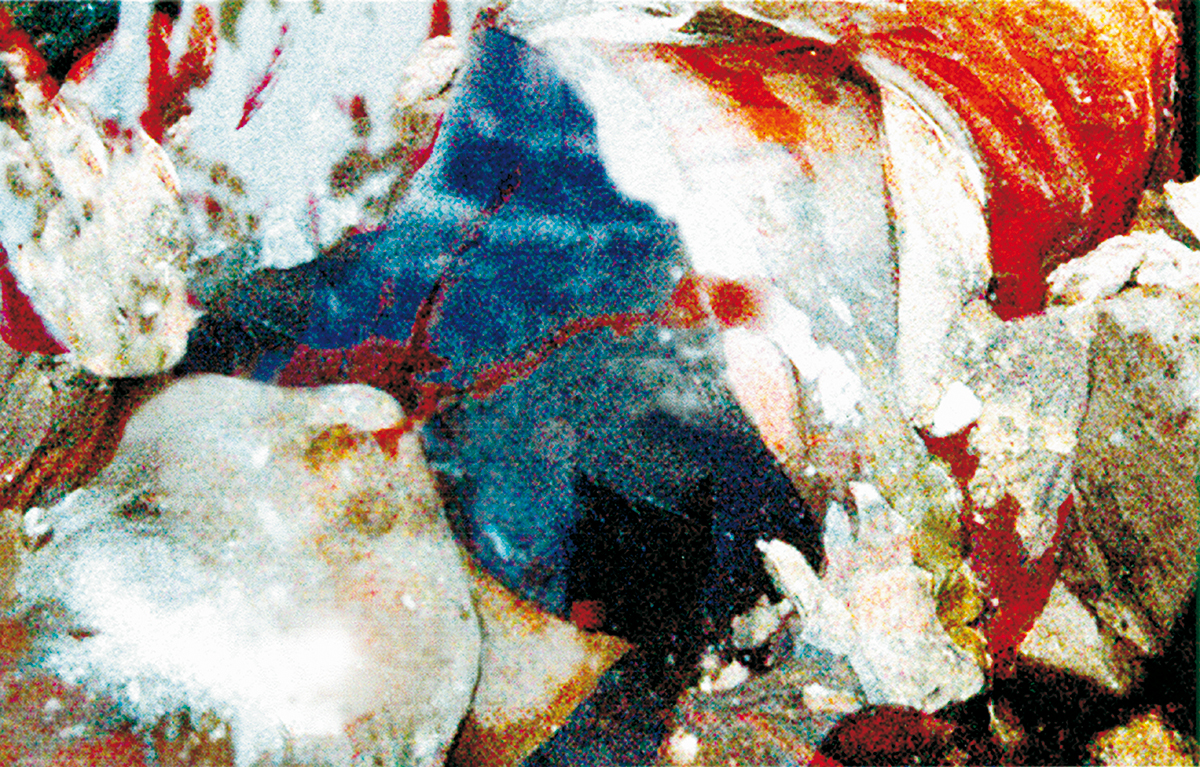 Although D. Meimaroglou shares certain biographical connections with Maria Klonaris (whose cousin Marilena Klonaris happened to be D.M.\'s first art instructor during her teen-years in Alexandria) due to their Alexandrian upbringing, the three artists finally met in person during the early 1990s, at Alpha Delta Gallery in Athens, which was representing them at that time, and their encounter would lead to a lifelong friendship. In fact, in 1990 at Alpha Delta, Klonaris/Thomadaki exhibited images from Le Cycle de l\'Ange, a major theme in Art History that Meimaroglou also happens to \'adopt\' in her work in a different light. \"Angel B\", part of her exhibition entitled \"Fallen Angels\" consists of the blown-up press image of the corpse of a young child that Meimaroglou processed digitally and transformed into an Angel. 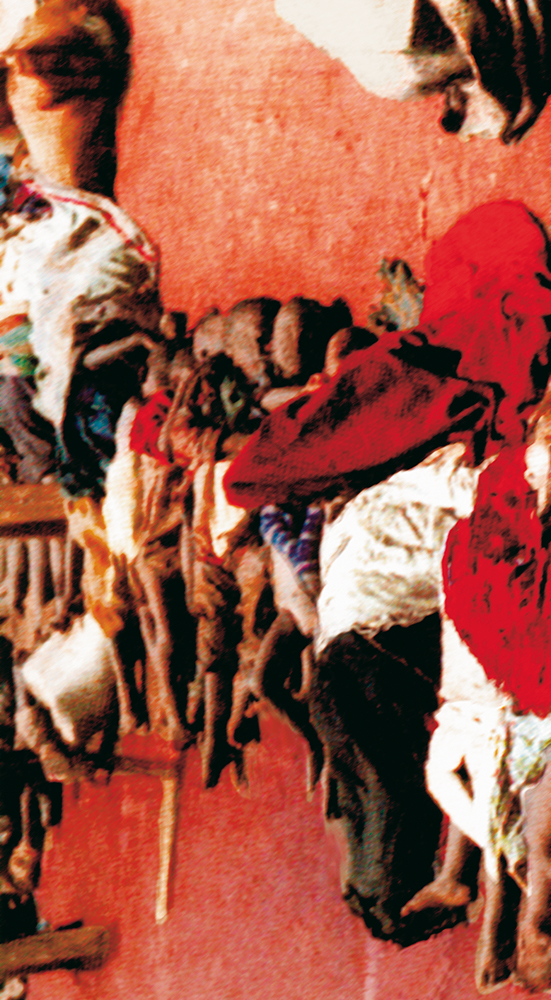 A passionate collector of newsreel excerpts that she films with a handheld camera from the TV and clippings of everyday stories of violence, her art is a way to cope with the fragility of the human body and the randomness of life. Particularly interested in the biographical and the personal, she gets deeply involved with women on the edge. Meimaroglou\'s work is anthropocentric. Her video-trilogy \"The Flowers of Evil\" 2004-2006, depicting the famous Baudelaire poem, is her first effort to use the moving image whilst its theme \'portrays\' the Iraq War. \"Ingredients for a Dream\", the second part of the trilogy, consists of a frame-by-frame animation of the still image of a dying girl in a Baghdad hospital. In Meimaroglou\'s allegorical video, the girl is having a nightmare as her red dress fuses with a bomb explosion. This work connects with \"Requiem pour le XXe Siècle\"(1994) by Klonaris/Thomadaki, where the medical photo of a hermaphrodite becomes the \"screen\" for images of war and violence. 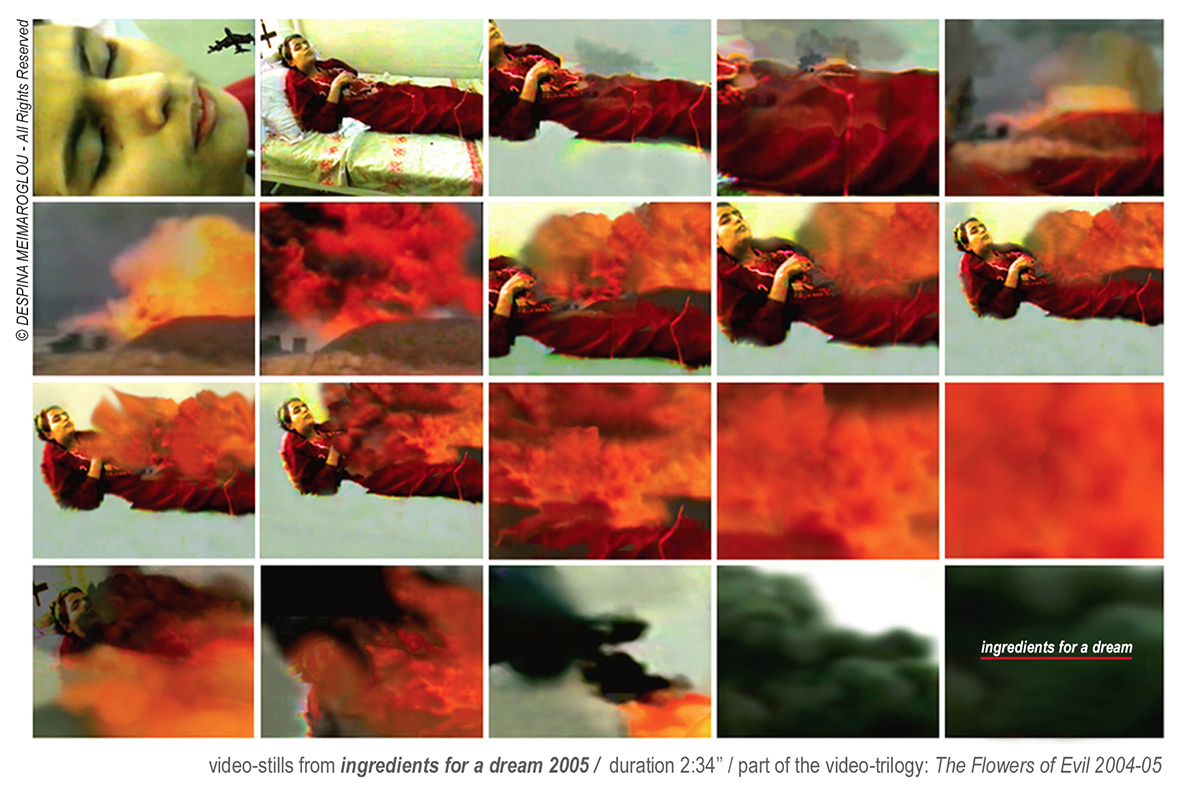 The Body of the Dead Christ in the Tomb (1522) by Hans Holbein the Younger and the image of a violated young woman taken from a news-clip. /Despina Meimaroglou © 2005 - All Rights Reserved"> 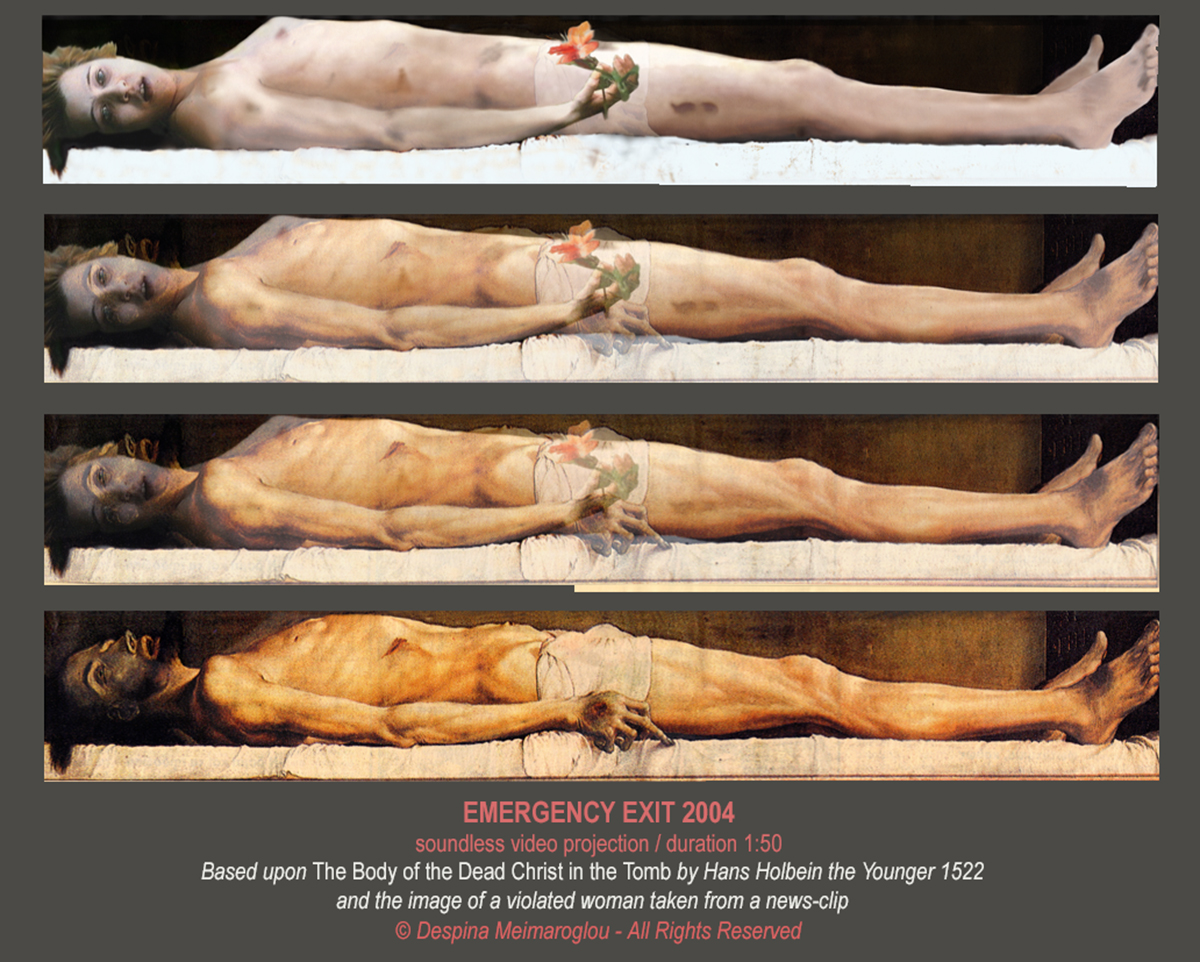 It was artist Costis Triantafyllou who first told me about Catherina Papaiacovou\'s legendary, yet unseen underground short film from the early 1970s illustrating all body fluids, a film that is today lost in storage. Having studied acting at the Drama School of National Theatre of Greece, young Papaiacovou quickly moves away from what she was taught. Her visit to the radical Festival Mondial du Théâtre in Nancy is life-changing and allows her to take part in the boom of alternative theater in the early 1970s. There, Papaiacovou gets fascinated with RAT theater, with whom she later collaborates in Athens. At the same time, she writes poetry and in 1974, the year of the fall of the military junta, she publishes her poetic collection \"Ilios Anthilios\" (Anthelion Sun) as a full issue of the historic underground magazine Kouros. She translates Roland Barthes in Greek and, in 1984, in the art journal Eikastika, she publishes \"Katerina Thomadaki/Maria Klonaris : Notes sur leur cinéma expérimental - Super 8 super ∞\", an essay that poetically unfolds the artists\' visual language. 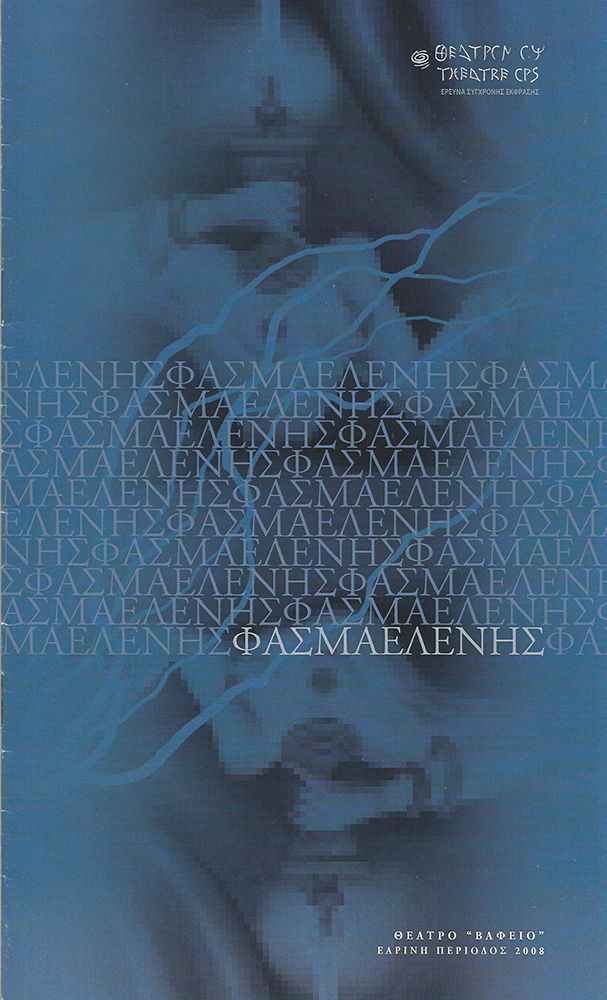 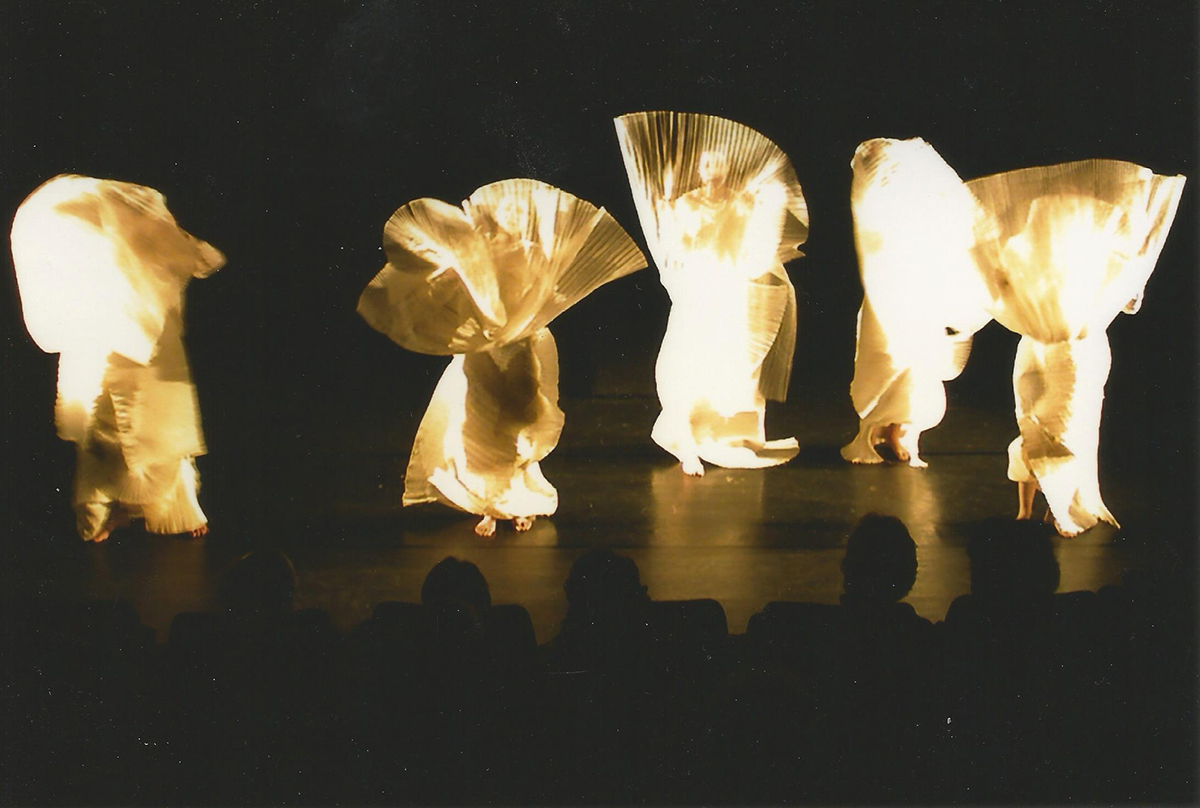 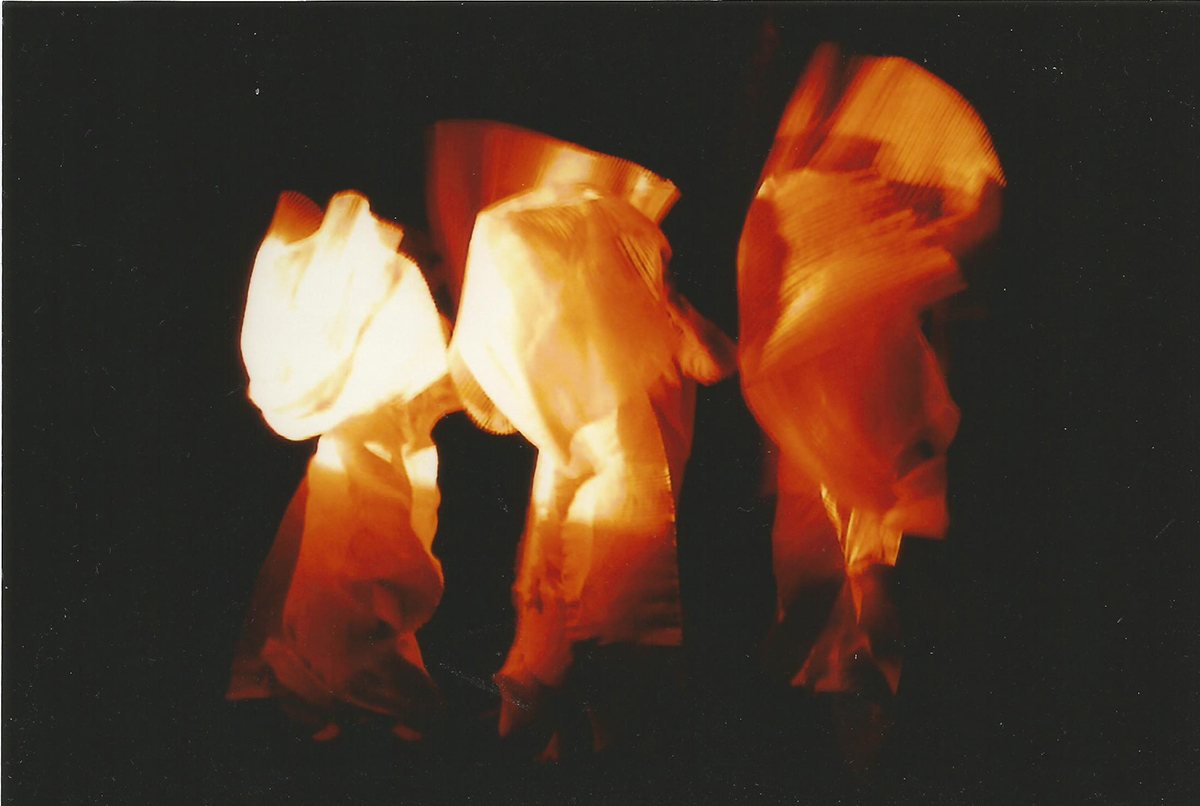 Similar to Meimaroglou and Klonaris/Thomadaki, Papaiacovou\'s work is modular. It consists of a series of long-term works in progress approaching the form of ancient tragedy in a new contemporary way, one that became over the years her own theater method called OPS, the name of the theater she artistically directs. Papaiacovou edits together fragments of different texts, uses speech as rhythm and sound, bridges different media on stage and understands props, objects and set as a whole. An advocate of Poor Theater, Papaiacovou uses props only when they\'re intrinsic components of the play. For her, costumes are part of the score. She designs them herself out of thick organza. For \"Iliades\", a multi-layered re-composition of Euripides\' \"The Trojan Women\", she creates an impressive visual ensemble. Using transparent replicas of fragments of the Parthenon frieze, kept at the British Museum, she gives new life to this ancient narrative. 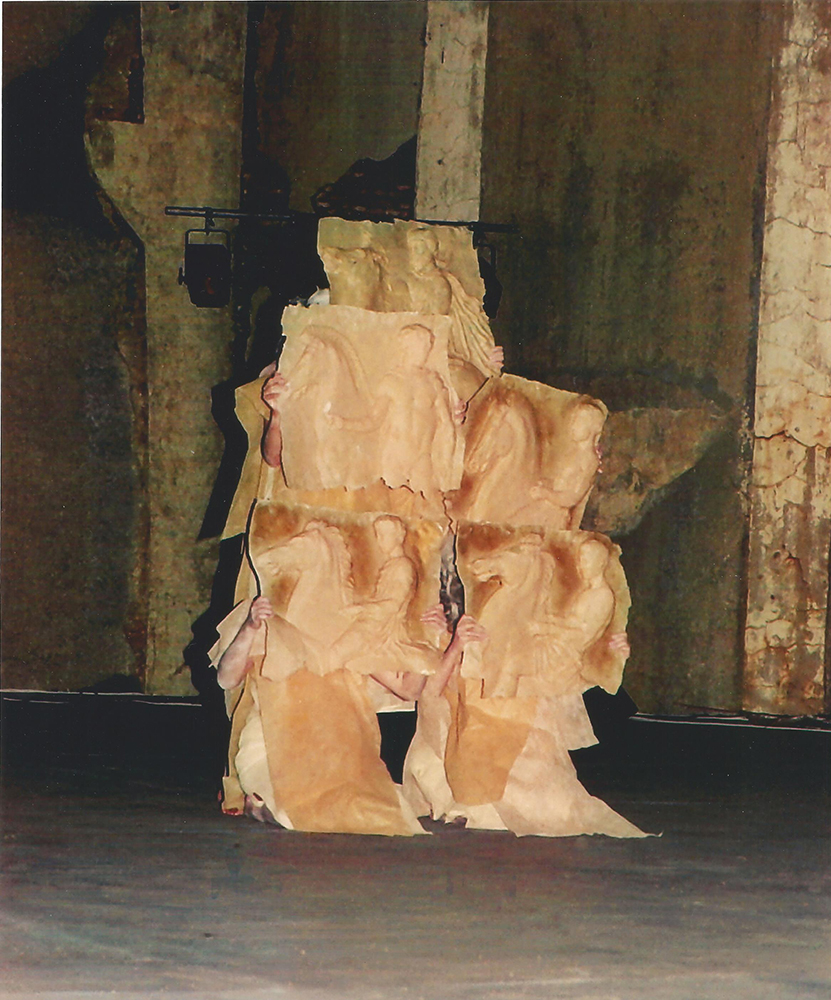 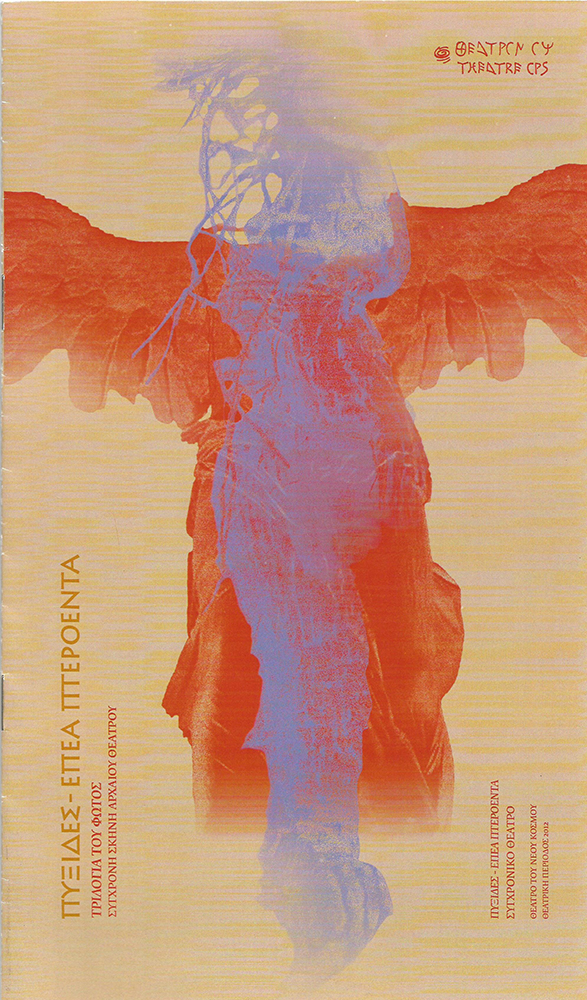 Costume and set design is Leda Dokoumetzidi\'s passion. I always remember her carrying around her sketchbooks filled with pen drawings of women in different costumes, inspired by different cultures she was in contact with through her travels and the press. \"Escape from Henry\", presented first at The Royal Academy of Arts, is a work where the costume becomes the set. The performer\'s body is restricted in a straightjacket whose extra-long sleeves are tied to a column. He tries to escape as his movement becomes uncanny. 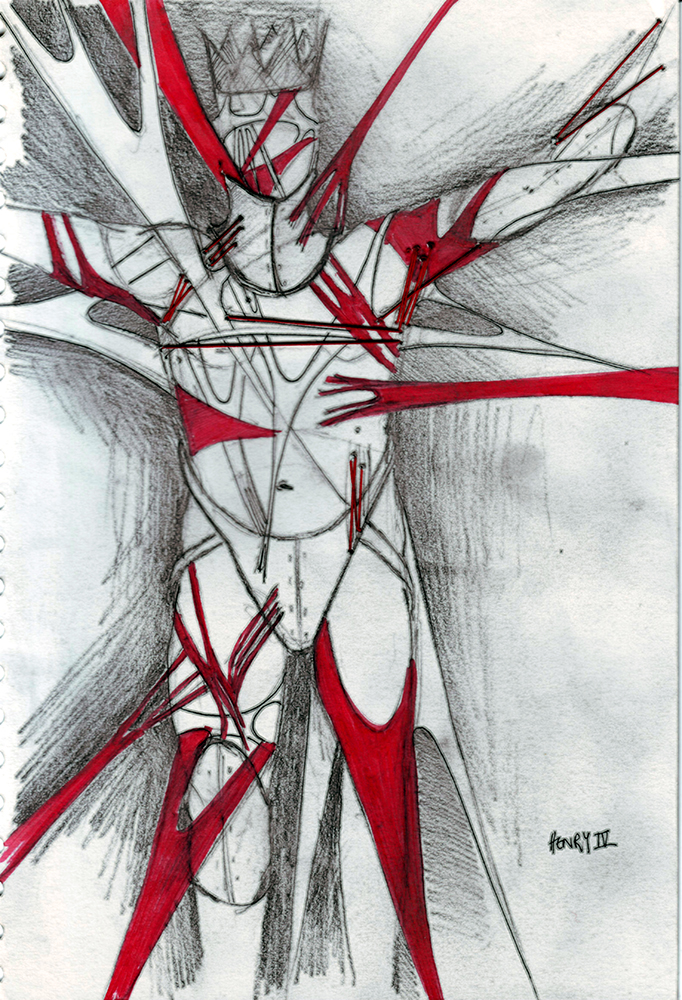 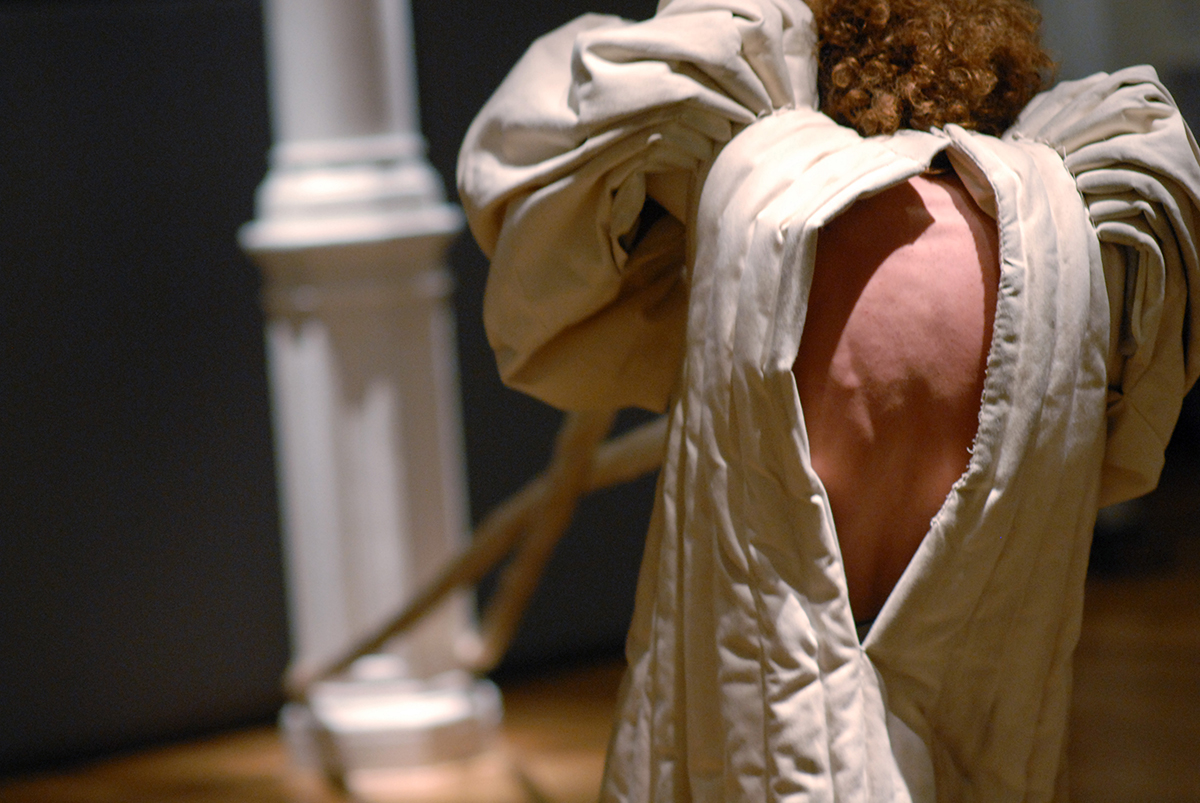 As an extension of \"Escape from Henry\", the mixed media installation \"Behind\" shifts from the performer\'s body to the exhibition space. Leda turns the rusty wall in the basement of Booze Cooperativa into a body whose viscera emerge from its surface, provoking an unsettling feeling. Made out of fabric, wool, condoms, paint, beads and other recycled materials, hand-sewn piece by piece in situ and at the hospital while her mother was undergoing surgery, \"Behind\" reaches out to the inner side of the physical inanimate world. The notion of the uncanny is ubiquitous, as the abandoned interior suddenly becomes a nightmarish, immersive stage. 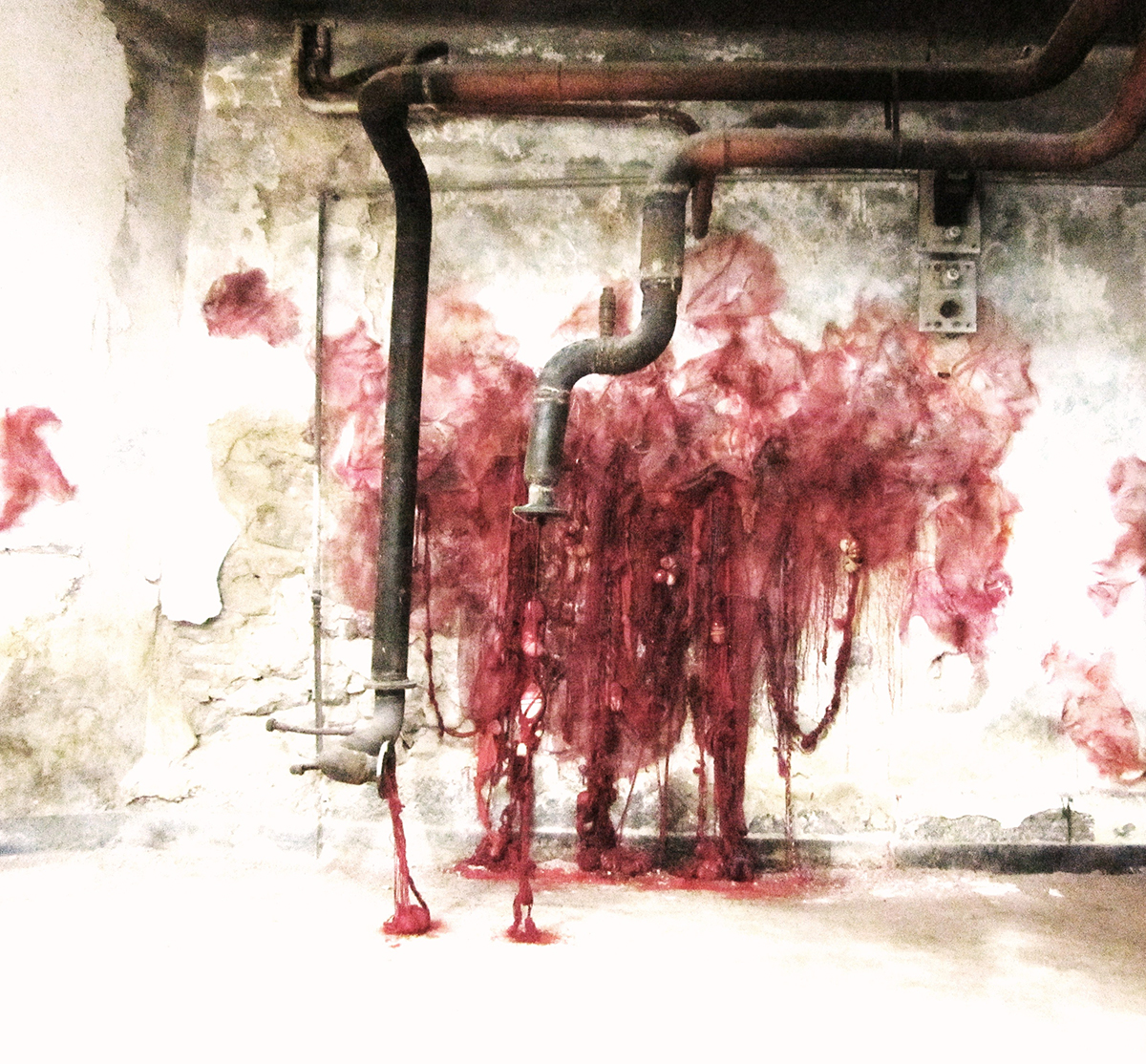 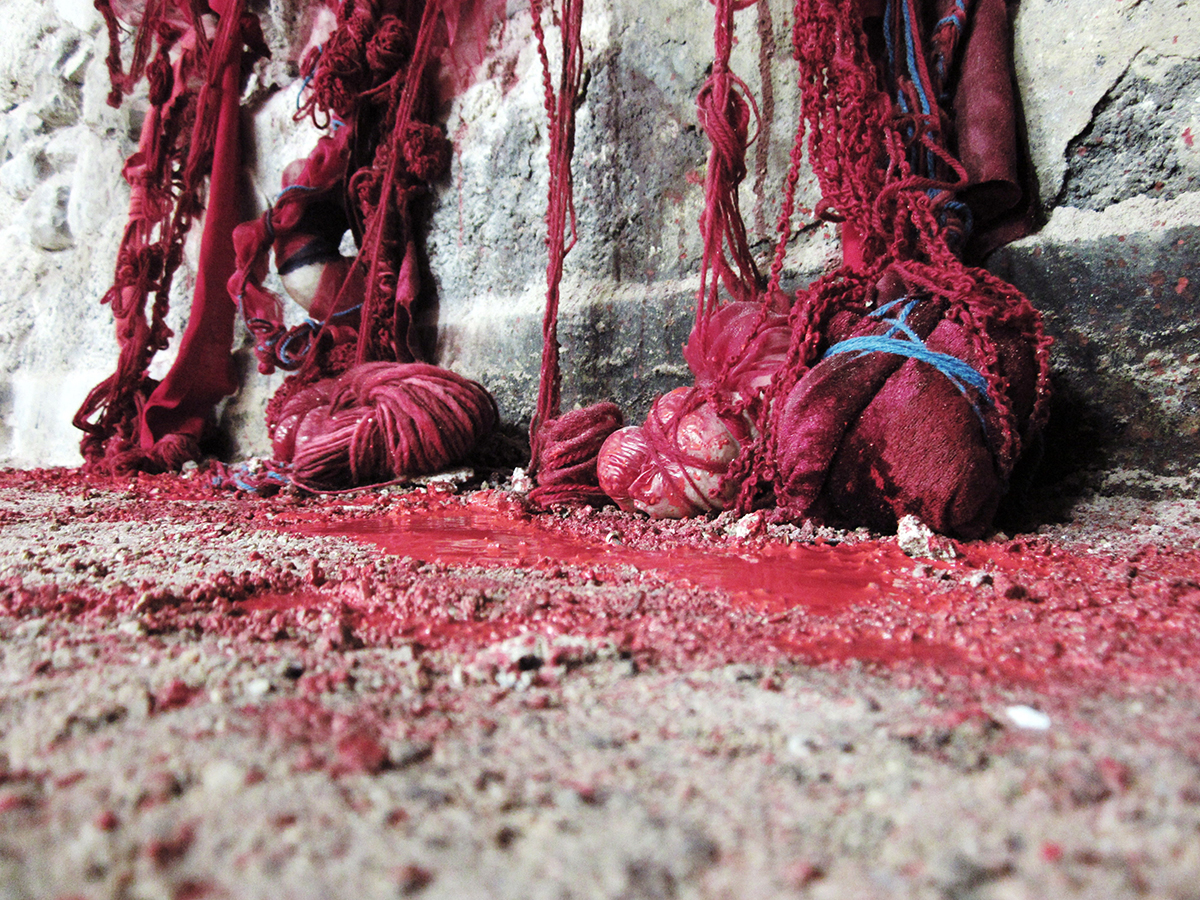 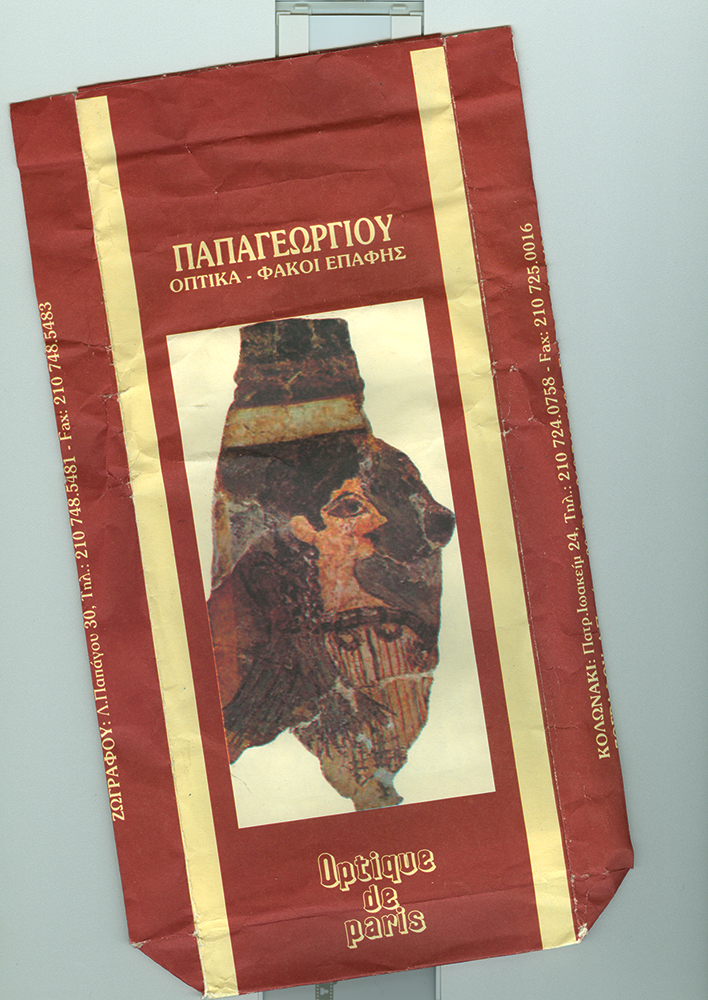 We left Exharheia and moved to the neighboring Kolonaki district. Next stop was an apartment on Skoufa Street. a few feet away from Leda Dokoumetzidi\'s studio. At the building entrance, Christina covered my eyes with her scarf, which she only took off when we entered the bathroom. She then left me to explore the space in private. What looked, at first, like an abandoned bathroom, was actually an ongoing installation. The space was filled with paper lists, postcards of the Acropolis, post-its with questions about homeland and happiness, pencil sketches of human body parts, empty bottles of beauty and cleaning products and other things, staged in a seemingly casual manner. Later she briefly mentioned she was perpetually transforming this space. She covered my eyes again and the next thing I saw was the window of an empty store, which had been closed down post-crisis and was left empty, with a few cables lying on the floor and bunch of flyers. 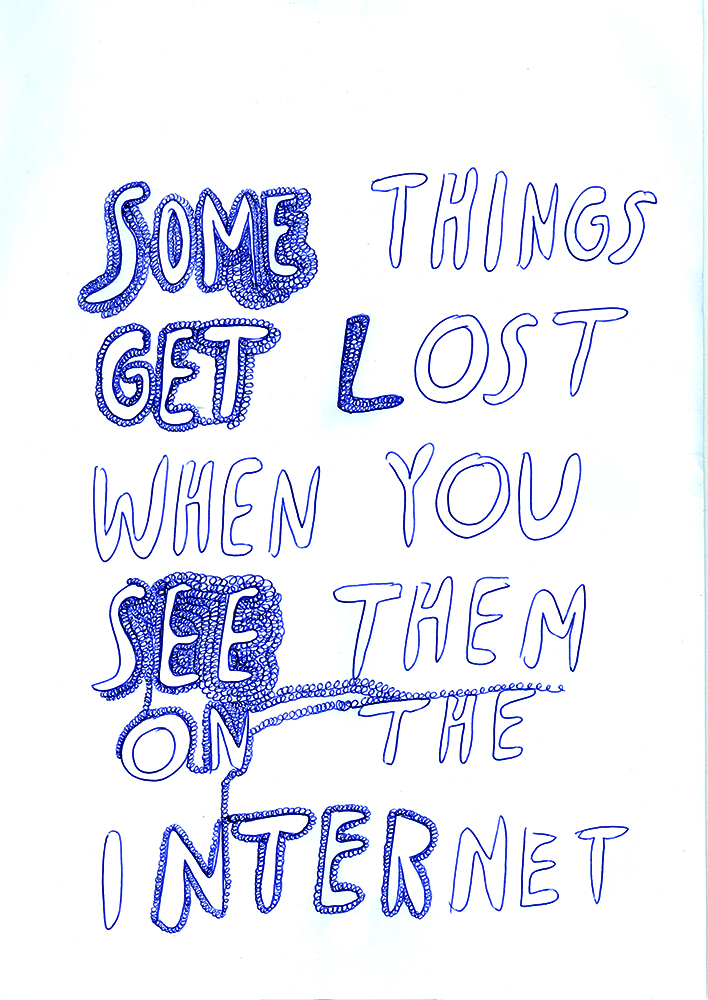 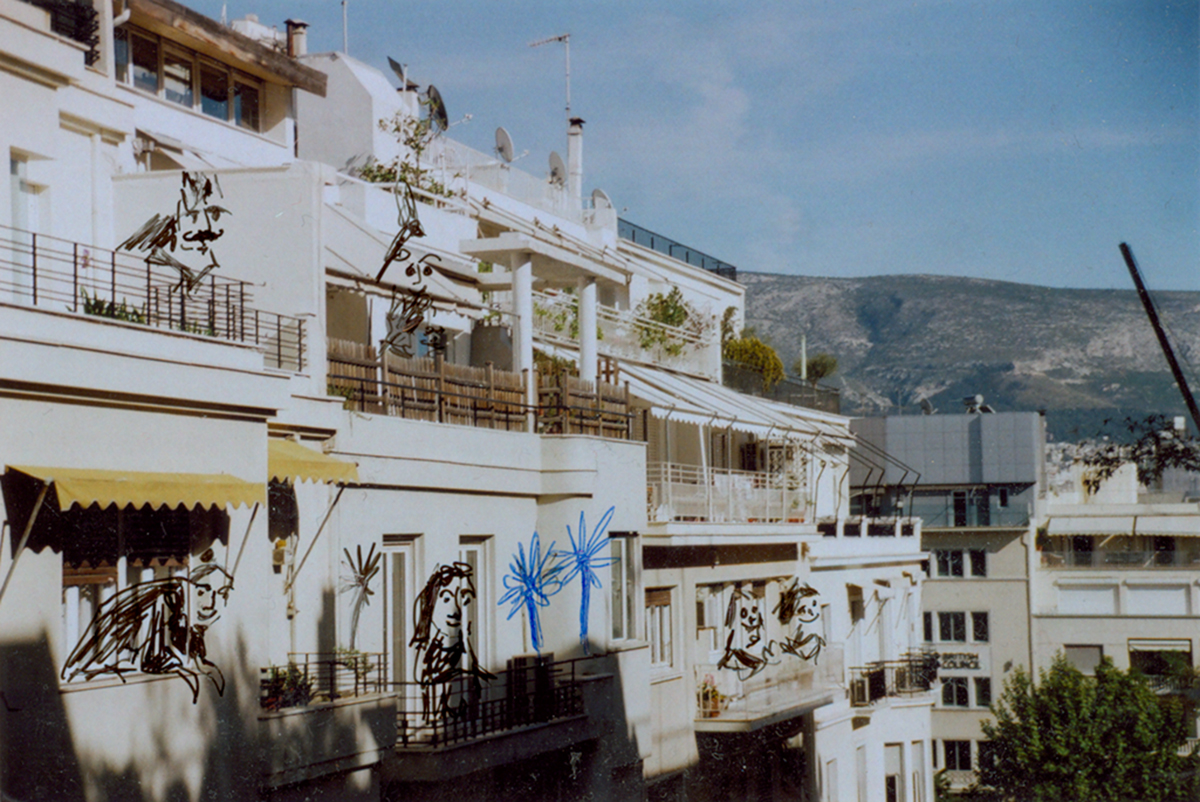 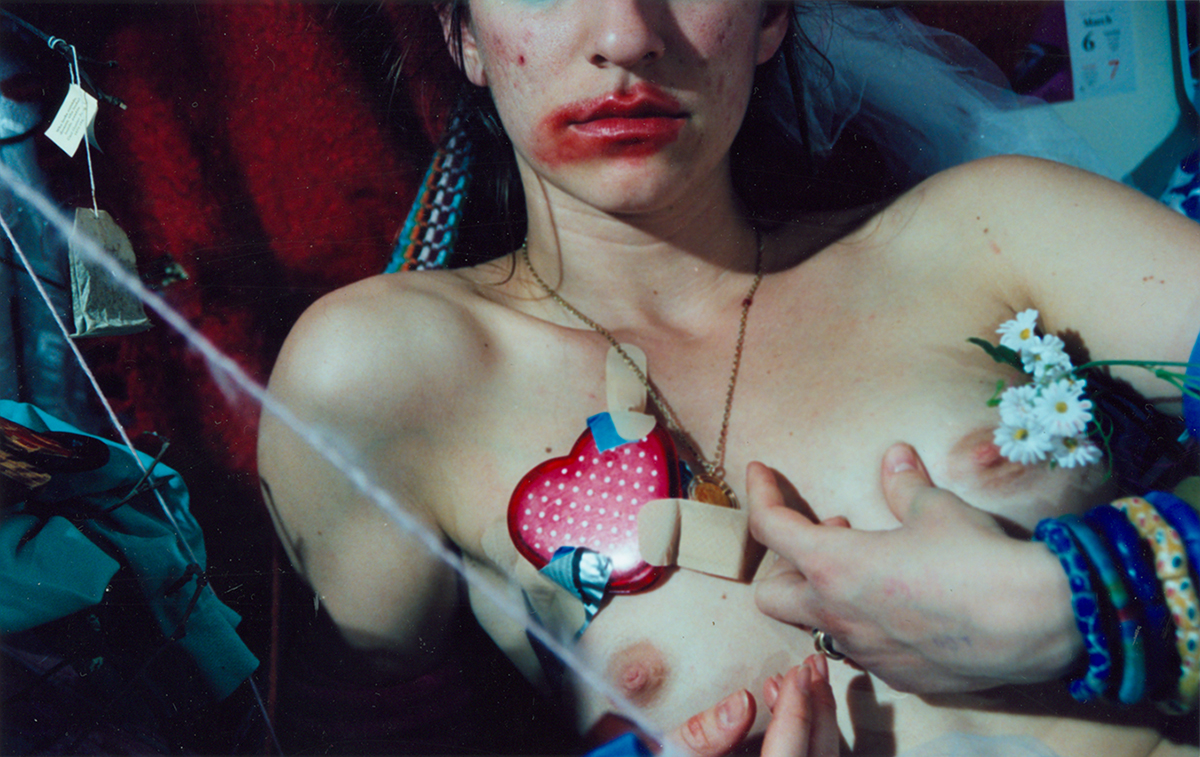 The term « Synaphai (Connexities) » signifies a state of connection and is borrowed from a concerto written by composer and architect Iannis Xenakis, whose work intrigued Klonaris/Thomadaki. Five handpicked artists working in different fields are brought together in this online section in order to tell a collective story via photos and text. Some of these women’s lives intersect with those of Klonaris/Thomadaki, bringing to light interesting commonalities. Others find links with them indirectly based on their conceptual approach and artistic process. All of them have, at some point, been confronted with questions of (self)identity, deracination and homecoming.

Overall, this online portfolio, by association and juxtaposition, invites the reader to consider less apparent aspects of Klonaris/Thomadaki’s work. Just as importantly, it illustrates my personal experience with inspiring people in a moment of coming back home.

Eleni Tranouli is an independent art critic, based in Athens. She holds a Diploma in Architecture and an MA in Cinema and Audiovisual studies from the University of Sorbonne, Paris 3. She has collaborated with artists Jackie Raynal and Alejandra Riera and has been a Stavros Niarchos fellow in the Department of Film at The Museum of Modern Art in New York. She has written for La Furia Umana, Revista lumière, The International Journal of Screendance and Le Magazine du Jeu de Paume.

Acknowledgement
The author wishes to extend her sincere gratitude to all the artists featured in this section : Antoinetta Angelidi, Despina Meimaroglou, Catherina Papaiacovou, Leda Dokoumetzidi and Christina Thomopoulos. Sincere thanks are also to Stamatis Schizakis, Costis, Théo Deliyannis, Sklavis Films Co. and the Contemporary Greek Art Institute where part of this research was completed. Finally, special thanks are due to Sally Martin Katz for her careful reading.