Mathieu Pernot’s work belongs to the tradition of political art informed by history and sociology. The artist proceeds by series, which constitute as many analytical and successive points of view regarding major political and social questions of identity, memory, alienation and progress. In this interview he elaborates on his re-use of preexisting images. Read also : “Mathieu Pernot Making Images Dialectical.”, interview by Étienne Hatt in artpress n°408, February 2014 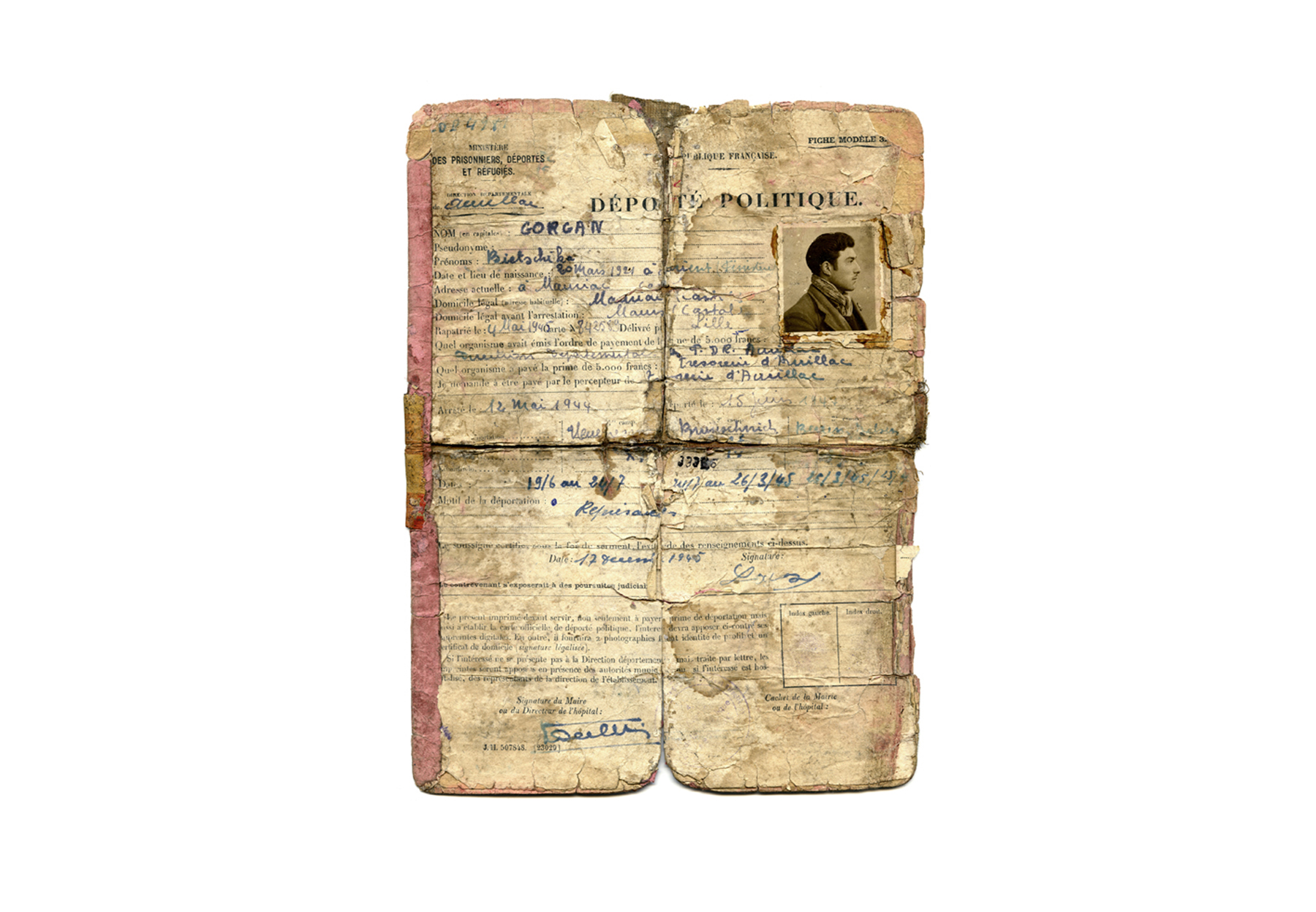 Étienne Hatt Much of your work, particularly since the late 1990s, incorporates preexisting images. What is the thought process that led you to adopt this procedure?

Mathieu Pernot Above all it has to do with my encounter with the images. First there is the emotion and the fascination that these discovered images awaken in me. The photographs call out to me; I try to answer them, to put them back into some kind of form if that seems necessary, and to integrate them into my work. I remember a photograph showed to me during a conversation with Bitshika Gorgan, the patriarch of the Rom family I had been photographing for several years. It was an identity portrait taken upon his return from the German concentration camps. The image was a historical document, poorly conserved, scarred by the years, but whose touching beauty reminded me of Flemish painting. There was a kind of vertiginous appeal in this image, which constituted my first use of archives. 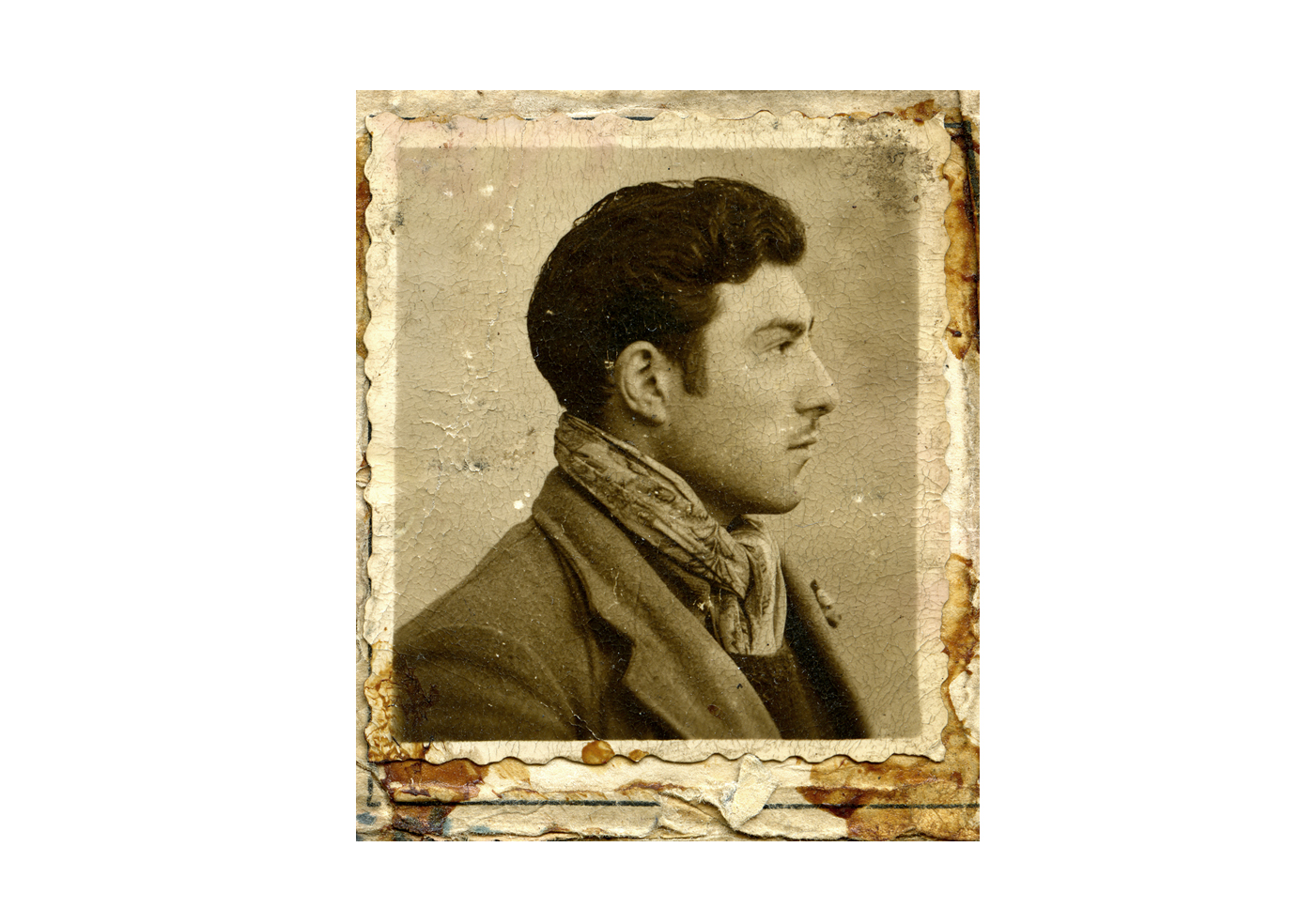 E.H. This practice, long adopted and accepted in the plastic arts, has been used to question the notion of authorship and established hierarchies among images of different status. How do you position yourself with regard to this critical stance?

M.P. It’s not for me to establish ratings and hierarchies, but it may be useful to distinguish between different uses of preexisting images. There are artists who collect images without doing anything to them, those who invent different classification systems in order to reinterpret them, others who appropriate the initial documents as the raw material of a conceptual or plastic process, and finally, those artists who produce imaginary archives. I find it difficult to define myself precisely with regard to these approaches and I guess some of my projects could fit into several categories. What remains very important to me is to continue to take photographs, to remain in contact with the world and not just work with the images produced by it. My work is a sort of montage between the images I make and those I find.

E.H. Your research on the Saliers gypsy camp opened under the Vichy regime sparked your interest in the police identification files, now conserved at the Bouches-du-Rhône Departmental Archives, which allowed the authorities to control these populations’ movements. By contrast, for your work on housing projects, you used postcards from the 1950s-1970s, found at flea markets. Do you draw any distinction between documents of such different nature, form and status?

M.P. Indeed, the question of the use of photographs is an important one and I don’t grant myself the same freedom with all images. In the case of the work on the Saliers camp, it was above all an historian’s approach. This « scientific » approach was all the more necessary in that the work was about unearthing the history of a gypsy concentration camp which no one knew existed. It was important to show these police images without overdoing it, without playing « the artist. » The main issue was to find the museographic technique best suited to bringing this history to light by showing original archival documents, the photographs I had taken of the survivors, and the audio record of their testimony. I had to give form to history. 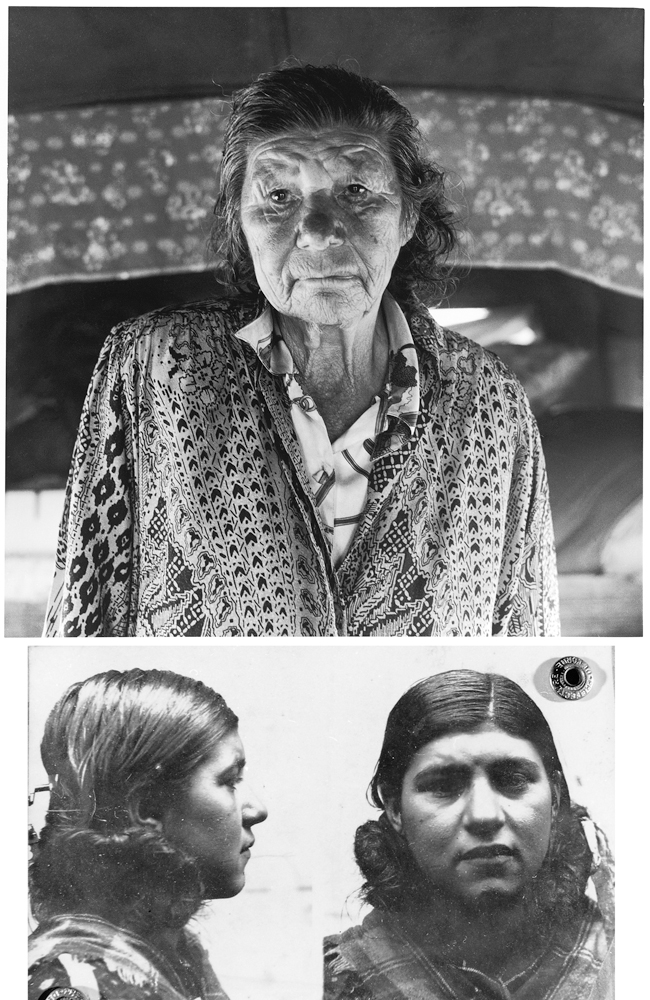 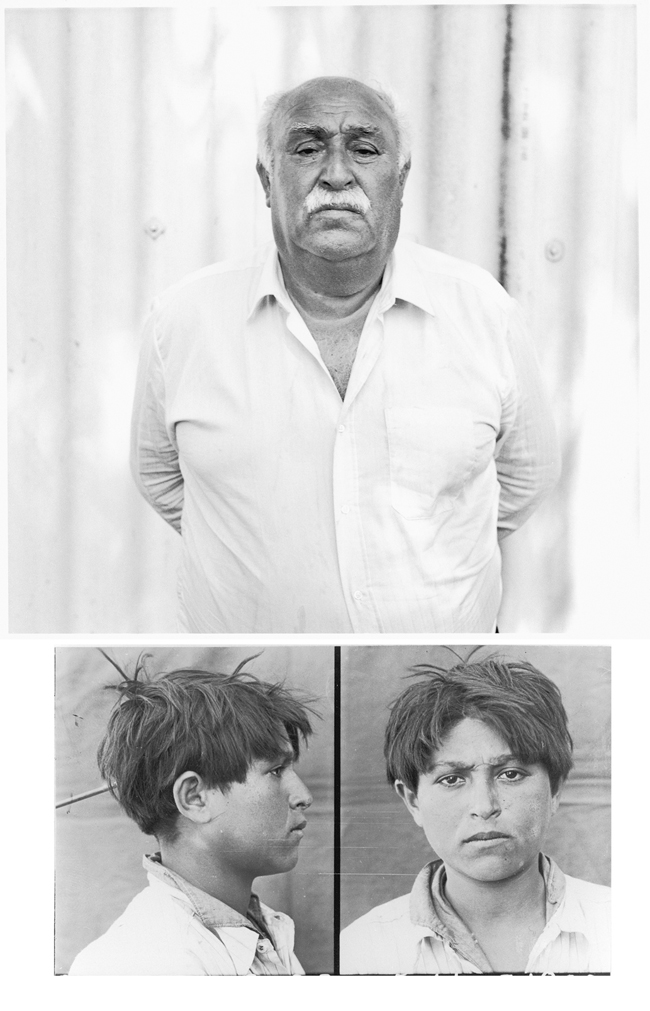 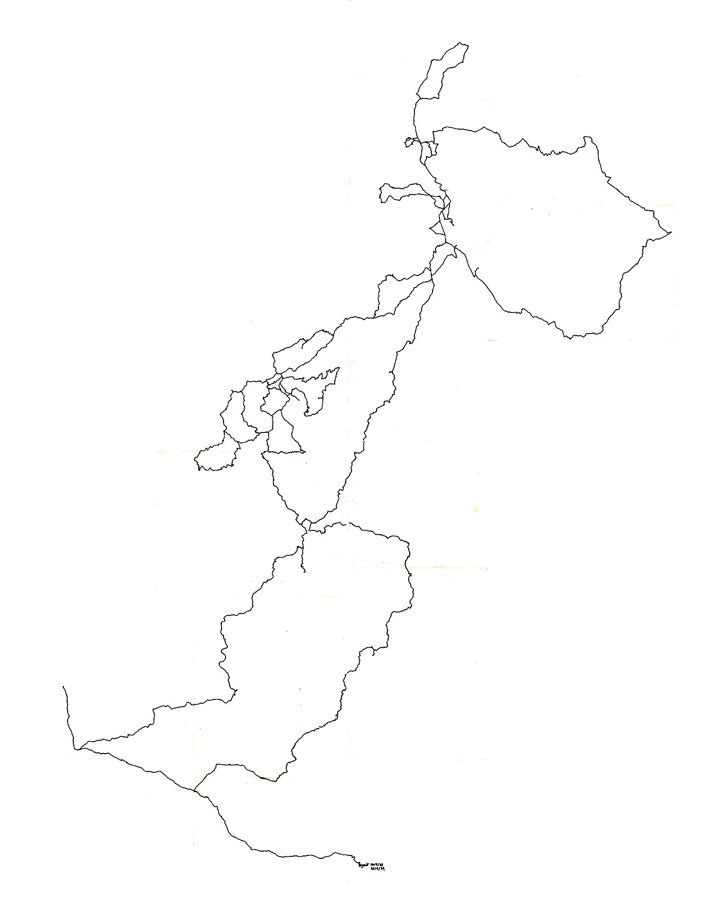 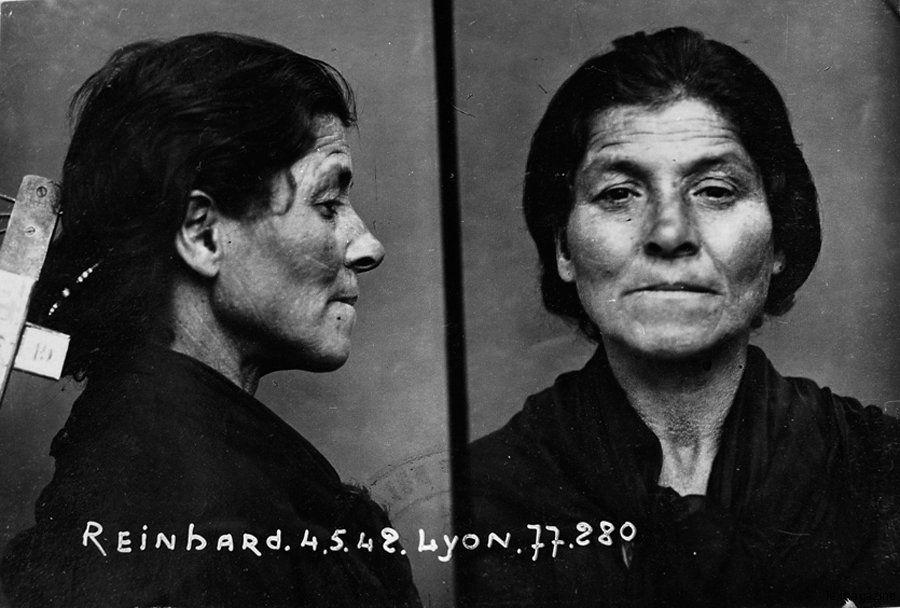 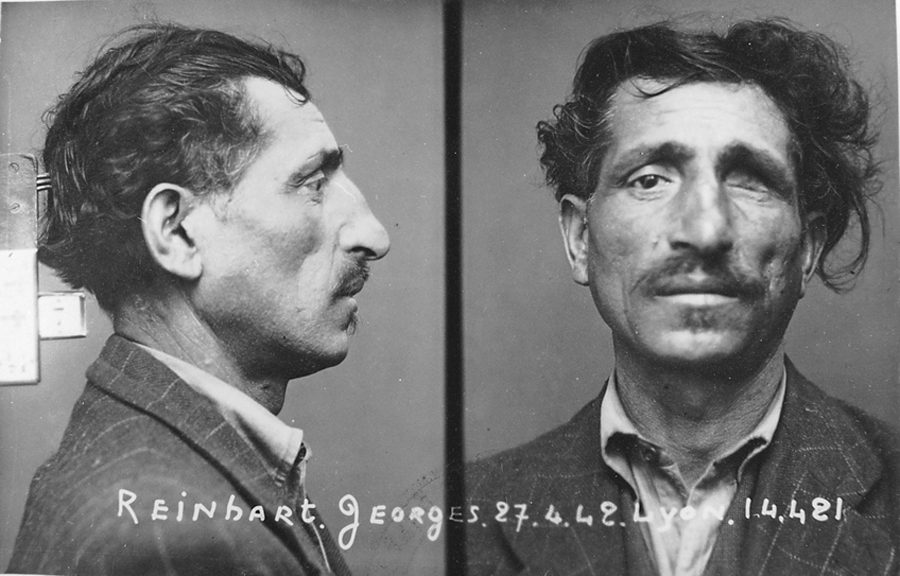 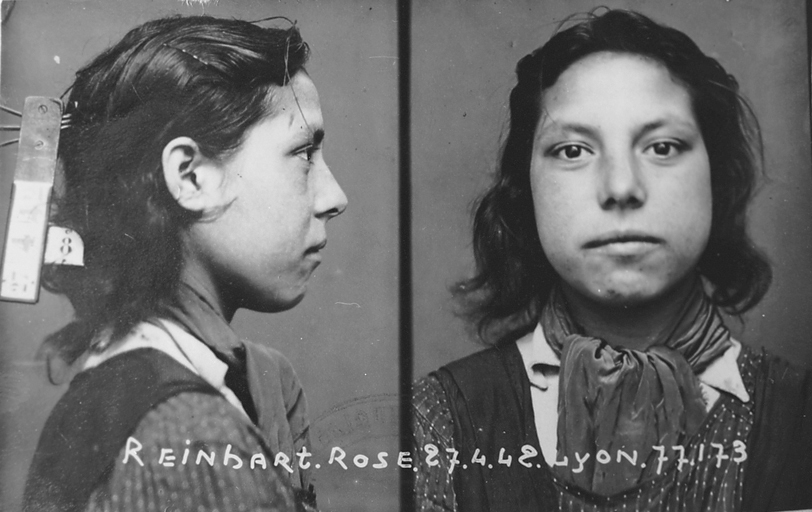 As for the postcards in Le Grand Ensemble [on large housing projects], I granted myself greater liberty in appropriating them. They are folk images that reminded me of images from my childhood. The choice of cards was linked both to the neighborhood they depicted and to some detail in the picture that moved me. I had a more emotional approach to them.

E.H. In the case of the postcards you used in Le Grand Ensemble, which you simply enlarged, does your intervention interfere with the original document?

M.P. I enlarged the postcards because I thought it was important to be able to « enter » the images and the urban spaces they represent. I also wanted to give a monumental form to this collection, to turn it into a sort of monument to fallen urban utopias. At the same time, you can see that they are enlarged postcards because I kept the jagged edges of the image and the signatures of the photographers who authored them. I show the original use, but transform the object at the same time.

E.H. In Témoins [Witnesses], where you enlarge details of these postcards, the intervention tends to erase the initial context. What remains of the document after this act of decontextualization, or even hijacking ?

M.P. Almost nothing remains of the initial document. The Témoins are ghosts of the image, disembodied apparitions. They could come from any printed photographic document. The bodies of the witnesses is awash in the texture of the image. They seem to dissolve in the color and in the printing process. I view them as mental images that project the viewer back to his or her own memory. People have told me they thought they had recognized a child, a mother or another loved one in these images. What relates them to the history of the housing projects is the fact that they originate in postcards, of which they are fragile, forgotten fragments. 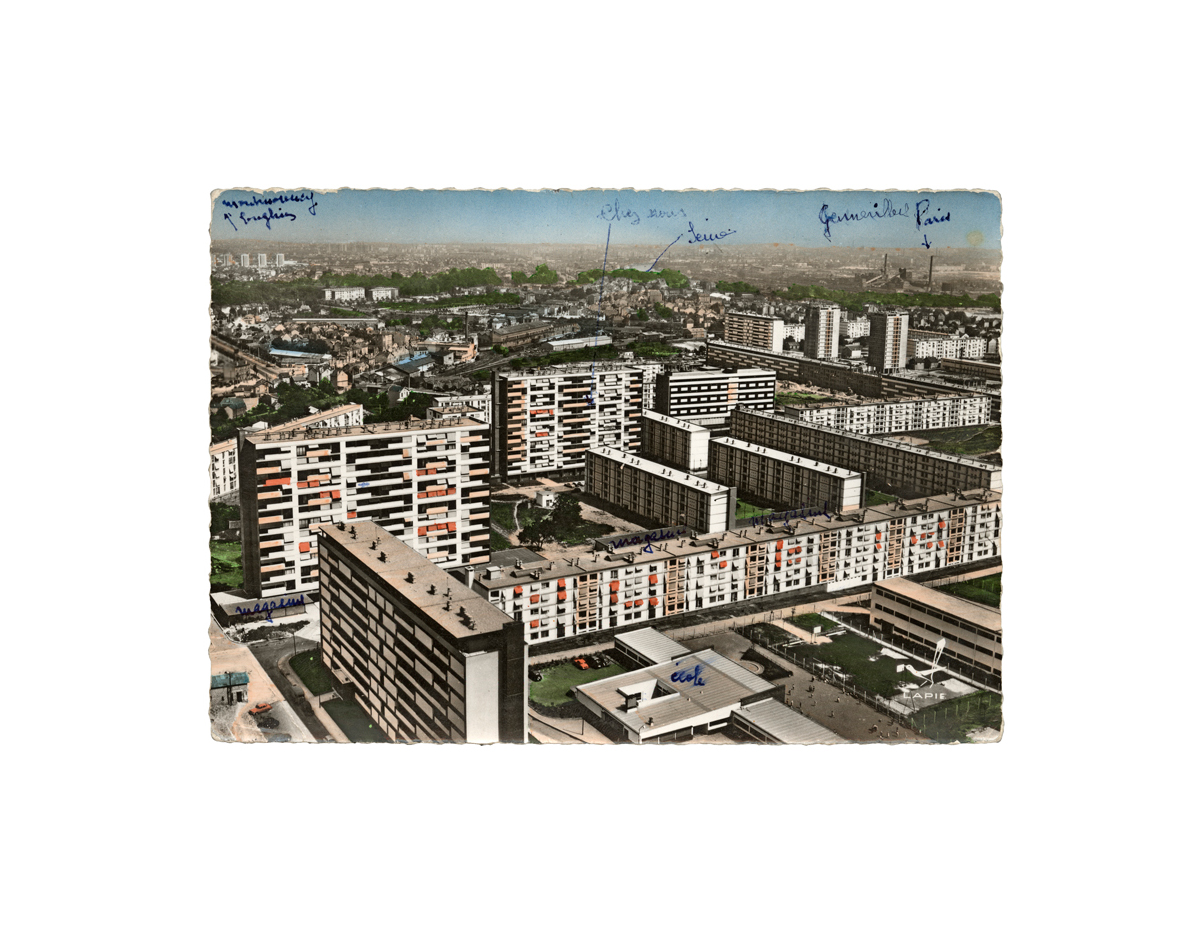 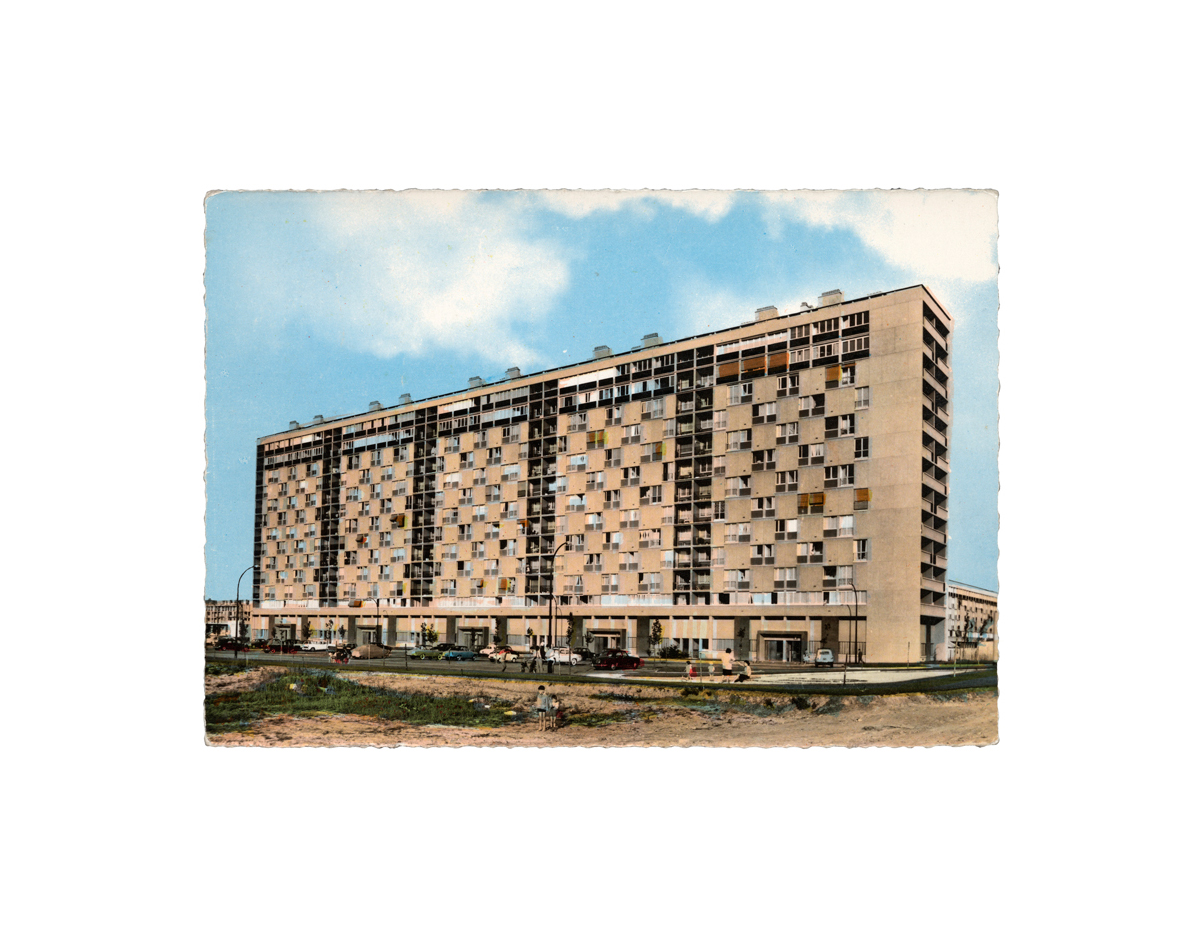 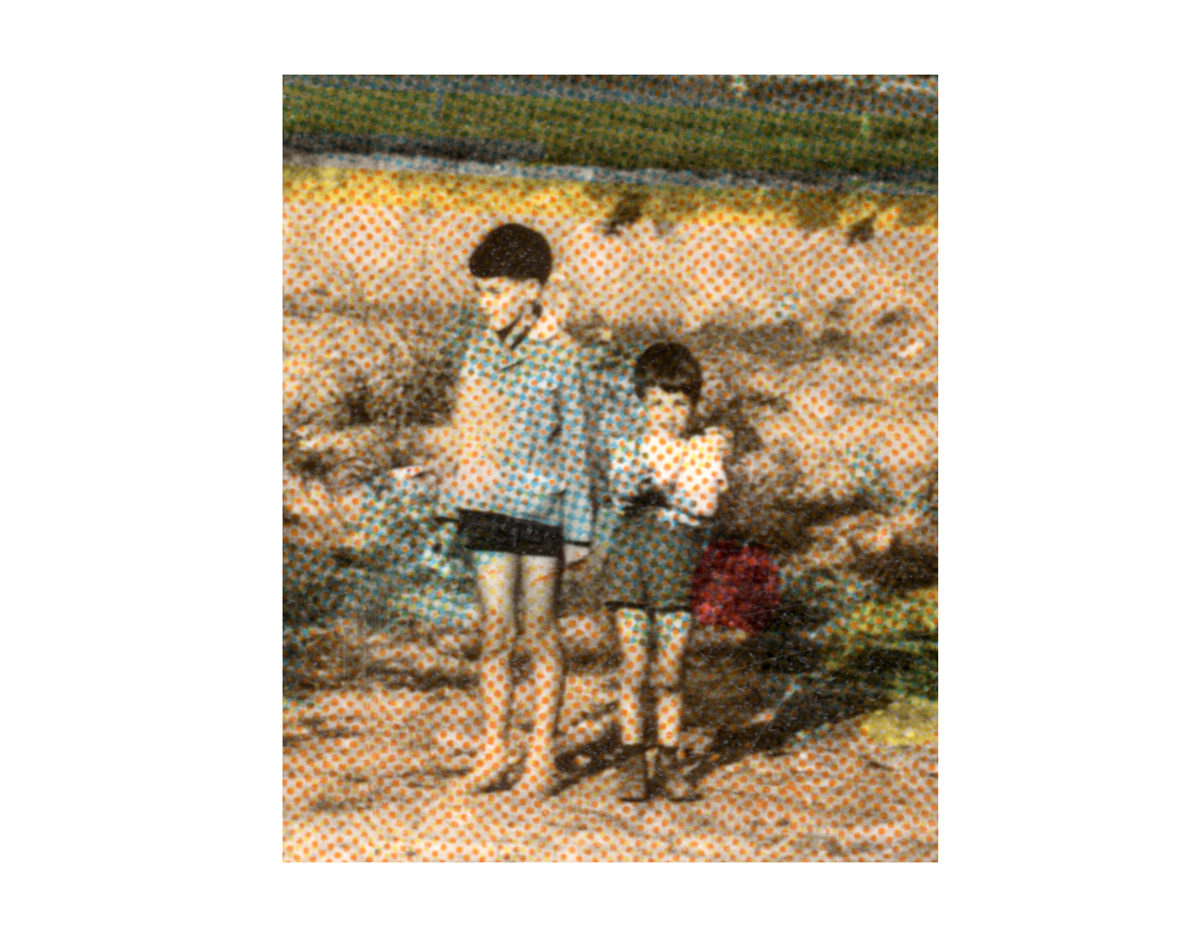 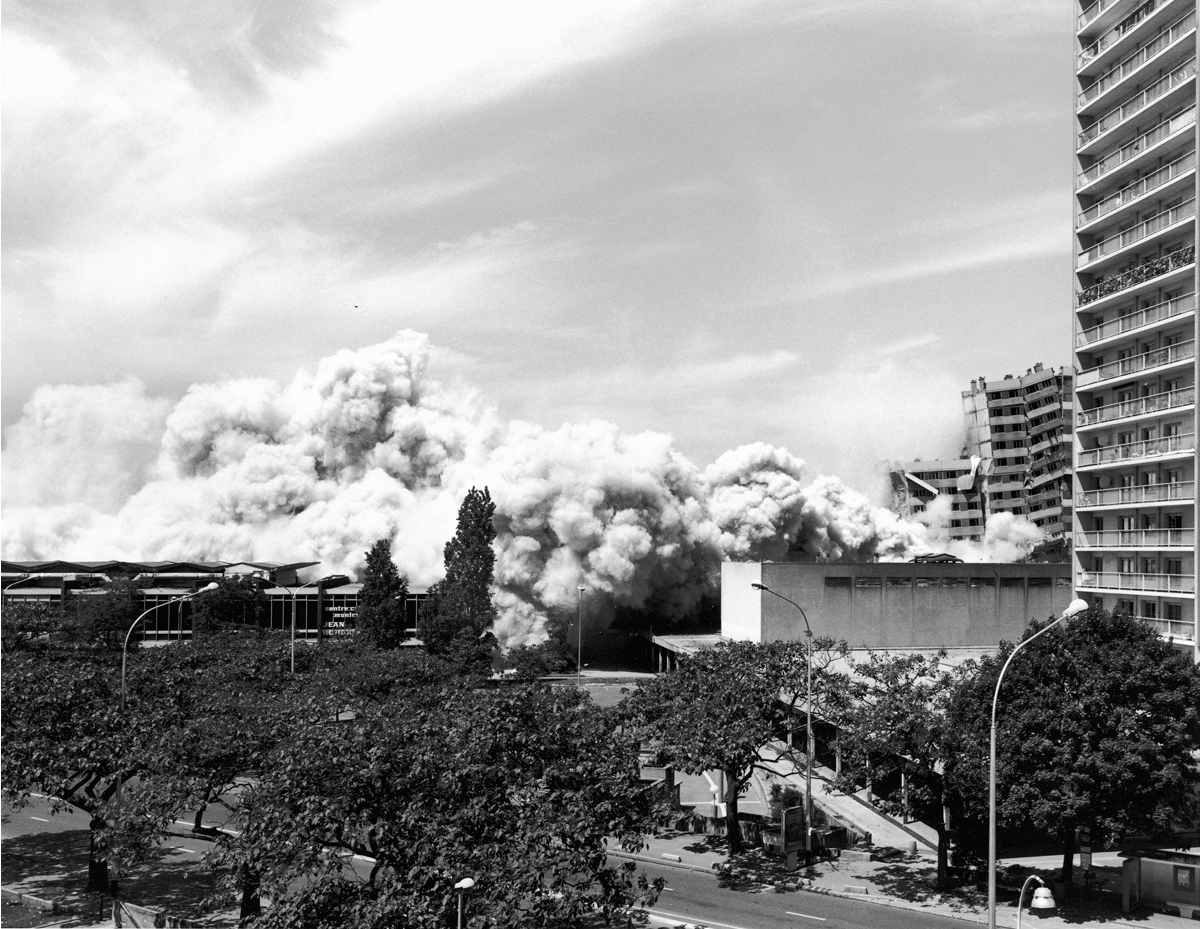 E.H. Your series created from preexisting documents are always connected to photographs you have taken yourself. For instance, the photos from the police identification files on gypsies engage in a dialogue with the portraits and reminiscences of the people you tracked down. In the same way, Implosions and Nuages [Clouds] bear witness to the recent demolition of the housing projects. What is the meaning carried by these mirror effects ?

M.P. When I begin a new photographic work, my first act is to deconstruct my own idea about it. I work in a way similar to that of a researcher who explores different hypotheses simultaneously. While I’m taking pictures, I also look at archives on the subject. I scatter the pieces of the puzzle, confront the different images, create sets. Each project may incorporate any number of forms conversing with one another. The work emerges from a kind of tension among the different sets. To borrow from the title of a book by Georges Didi-Huberman, the images have to take a stand. But it is never definitive and the montage may differ from one exhibition to the next.

E.H. Your book Un camp pour les bohémiens. Mémoires du camp d’internement pour nomades de Saliers [A Camp for Bohemians: Memories from the Saliers gypsy internment camp] (Actes Sud, 2001) is very instructive. It includes several historical texts that put the archival documents and your photographs in context. In Le grand ensemble (Le Point du Jour, 2007), on the other hand, this is completely absent. How do you explain this evolution ?

M.P. During my work on the Saliers camp, I was aware that the work I was doing had never been done before and would be impossible to do again. Very few people were interested in this story and for the very few historians specialized in this subject, the image was taboo and a source of fear. Whereas I felt it was crucial to tell the story of the camp through the police identification file photographs and through portraits of survivors. But that would not be enough, so I asked two historians to participate. The story of the Saliers camp was thus written and given form by bringing together a plurality of disciplines. It was a project that overwhelmed me; I felt it was necessary to make a history book, not an art book. I’m very happy to see that today this book has become a historiographical reference for scholars.
Le grand ensemble forms a kind of counterpoint. What mattered to me here was the history of the images and of the representations of the large housing projects rather than urban history as such. The only texts are those from the backs of the postcards of the projects. They constitute a minor form of literature, both poetic and vernacular. They also relate the history of that period. I didn’t want to add anything to these words and images, nor to historicize this work. The book asks questions but doesn’t provide answers, unlike the work on the Saliers camp.

M.P. Michel Foucault said the historian was someone who transformed documents into monuments. That could also define part of my work, in an approach one could call monumentary or documental. I try to find form in history and enrich myself as much with sociology, anthropology or philosophy works as I do with contemporary art books. It isn’t so much a question of knowing what an artistic approach can bring to a scientific work, and vice versa, as it is one of trying to produce a new object that cuts across the different disciplines.

E.H. You are currently working with the historian Philippe Artières on the Cherbourg mental hospital, whose very extensive archives you are exploring. Could you define the broad lines of this project and expand on the dialogue that develops between artist and historian?

M.P. The art center Le Point du Jour invited us to undertake a project on this mental hospital. My collaboration with Philippe Artières is very important to me. We come from different backgrounds and yet we’re strikingly similar in the way we work. For this project, we’re working from the institution’s own archives. The iconographic sources are very rich and we continue to discover new images. The idea is not so much to write a history of the place through photography but to make photographic histories based on the mental institution. A history of the practices and uses of photography; a history of images « in the margins. »

This interview was initially published in VU MAG #5, 2010. Courtesy of Aman Iman Publishing. Special thanks to Mathieu Pernot and Étienne Hatt for their kind collaboration