This “Carnet d’artiste” is an online notebook, with notes and documents chosen by the artist Omer Fast, whose exhibition at the Jeu de Paume will present a selection of works produced since 2011. The artist is currently working on a new video, which should actually be integrated into his Work Continuity (2012), therefore changing its device.

In his video installations made up of single or multiple projections, Omer Fast (born in Jerusalem in 1972) explores new forms of narration and forges links between words and images. His works aim to provide an in-depth analysis of cinema’s narrative form by proposing multiple viewpoints that present different versions of reality, and thus break free from the medium’s usual linear narrative. Taking advantage of the wide range of available editing techniques, Omer Fast manipulates images, sound, subtitles and voices to create multiple interpretations and temporal strata which, presented simultaneously on different screens, dislocate the story and transport the spectator making him/her part of an experiment testing the very limits of reality.

This exhibition is co-produced by the Jeu de Paume (Paris) and the Baltic Centre for Contemporary Art (Gateshead).

We have just finished scouting the two locations for Continuity 2015 and the new work Spring.
Here a photo of the village Nzalet al Hussayn that we will be using for Spring. I’ll post more soon… 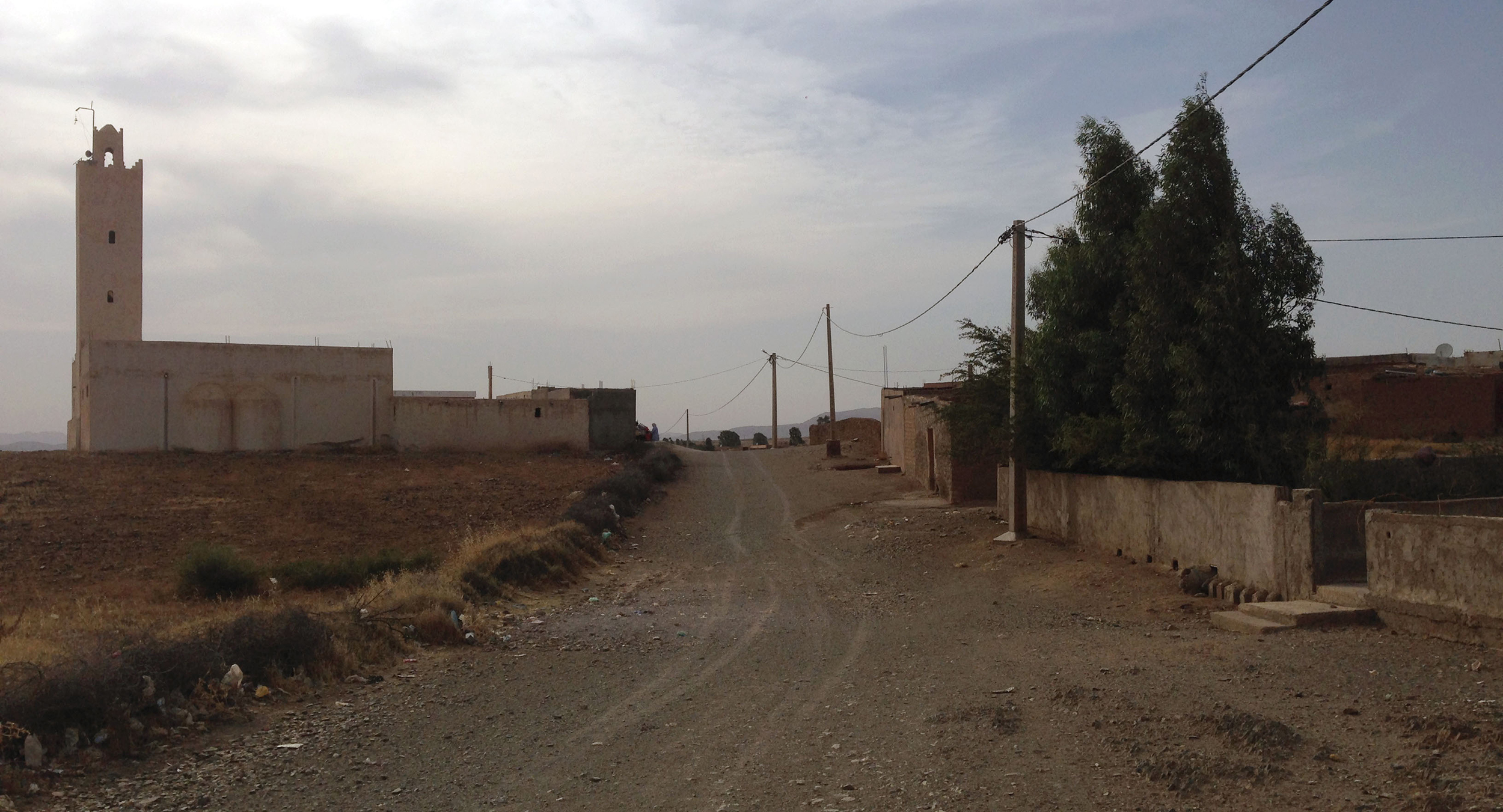 This is a picture of the waving cat I insisted on including in one of the sets. I don’t really like cats but I like Chris Marker so this is a little fan’s gesture in his honor. As I left the shoot today I saw the cat waving at me from inside the props van and immediately smiled. 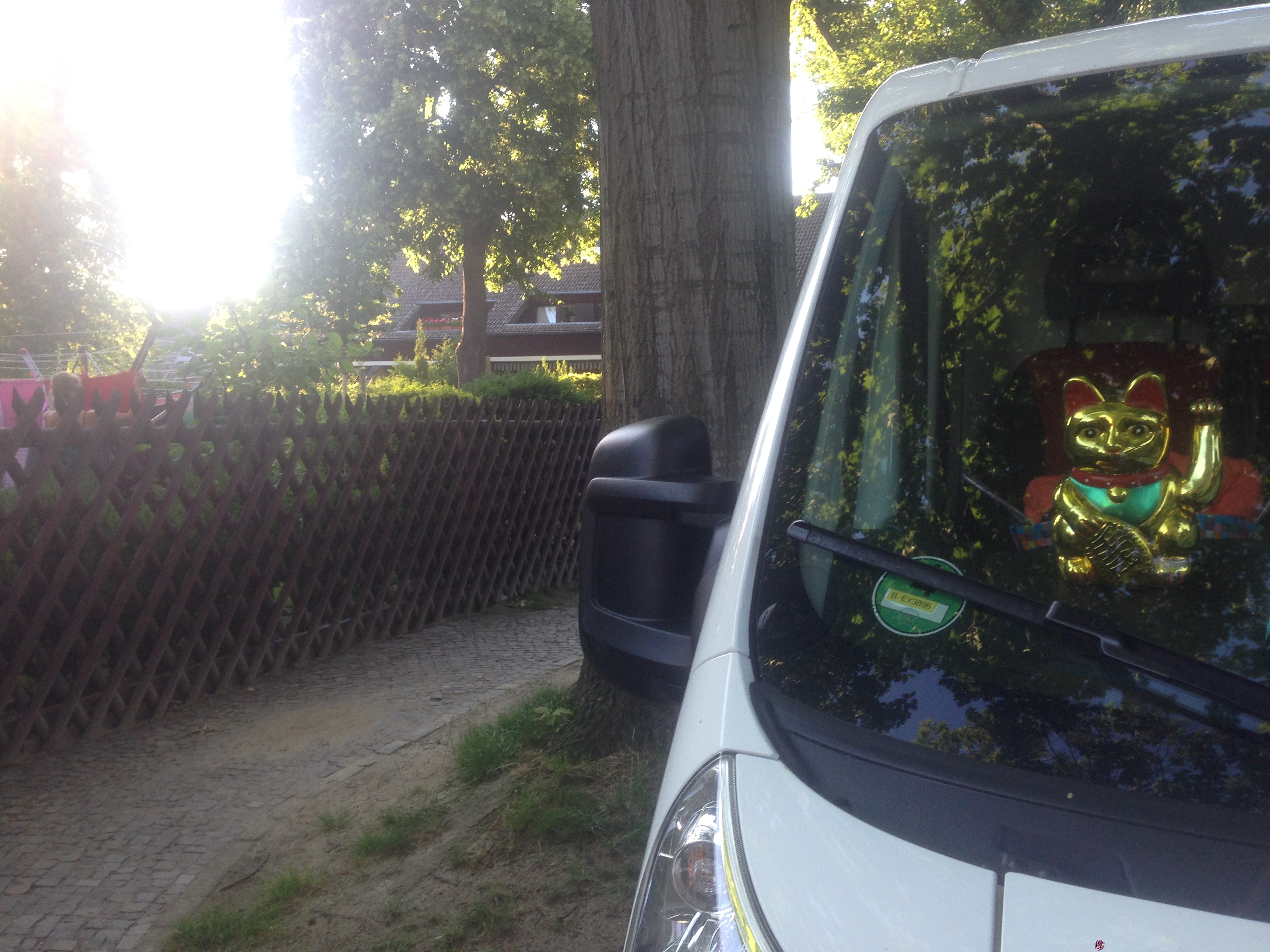 Here’s an excerpt of my working script for the new version of Continuity, that I will show at the Jeu de Paume. It includes some new scenes that I will be shooting in a few weeks in Germany and Morocco (here n°1 to n°6). The following scenes (n°7 to n°13) already exist in the previous version of Continuity, 2012. So, as you can see, the older and newer material will be woven together throughout the new scenario.

A Bundeswehr trooper carrier bumps along a vast, craggy
landscape. It stops inexplicably and a young, uniformed
soldier gets out abruptly and runs off into the
wilderness, throwing off his helmet and gun as he runs.

After a moment, a few other soldiers run out in pursuit of
the lone soldier. Fully armed and helmeted, they run more
slowly, occasionally yelling out: « Daniel! Stop! »

Far ahead, we zoom in on the lone soldier’s face as he
sprints. The name tag reads: VOGEL.

It’s a cold spring morning in a quiet German suburb.
TORSTEN FIEDLER stands in front of an empty indoor pool
and lights a cigarette. A few moments later he’s is in the
garden, casually gardening, but not really, still smoking.
He pauses in front of the bedroom window and looks in.

INT. THE FIEDLER’S HOME. BEDROOM. DAY
KATJA FIEDLER is in bed, her eyes red and swollen. She
looks up and sees her husband in the garden outside,
looking at her through the window, smoking. He smiles
tentatively, gesturing at his watch, but KATJA closes her
eyes. TORSTEN steps away, leaving a view of the wintry
garden. KATJA starts crying.

TORSTEN peers into a large cake box as ROY, the baker,
looks on.

ROY smiles. TORSTEN closes the cake box and gives him a 50
Euro note, smiling too.

TORSTEN
Here. Keep your opinions to
yourself. OK, Roy?

TORSTEN leaves. ROY pockets the money and watches as
TORSTEN carefully puts the cake box in his silver BMW SUV
outside.

TORSTEN puts the cake box into his silver BMW SUV. He
climbs in and drives away.

TORSTEN is cooking while KATJA sits on the other side of
the partly open kitchen. A cake decorated with a flag and
the words: « Welcome Home » sits nearby, along with KATJA’s
mobile phone, which suddenly buzzes. TORSTEN stops his
work and listens as KATJA reads a a message.

KATJA grabs the phone and keys and leaves. TORSTEN looks
out the window.

TORSTEN drives while KATJA looks out the window. The bare
trees rush by outside, when we suddenly spot the
silhouette of a large animal. Was it a camel? KATJA turns
excitedly, trying to get a better look but the car is
moving too fast. KATJA turns to her husband, a big smile
on her face. She caresses him tenderly. TORSTEN looks at
her briefly and smiles.

A young man waits outside the station, alone, smoking a
cigarette. It’s JOSEF. He’s twenty-two years old and wears
a Bundeswehr uniform with an ISAF patch. A large army
backpack lies nearby. JOSEF watches as a BMW SUV arrives
and pulls into a parking spot. He quickly throws his
cigarette away and straightens up. TORSTEN and KATJA step
out and stand near the car. They look at JOSEF for a long
moment, speechless and emotional. JOSEF steps forward
tentatively when TORSTEN snaps his fingers impatiently,
indicating he’s forgotten something. JOSEF stops abruptly,
steps back and picks up the backpack. He takes a step
forward but then stops abruptly again, sighs and smiles
crookedly. This breaks the ice. KATJA has tears in her
eyes. She rushes forward, passionately embracing JOSEF and
softly crying. TORSTEN follows her, more slowly. He looks
happy, relieved. JOSEF embraces them awkwardly.

Have you been smoking?

A long moment passes. TORSTEN taps KATJA’s shoulder, who
lets go so he can embrace JOSEF as well.

The BMW SUV speeds along, returning the family home.

The BMW SUV pulls up. TORSTEN gets out and looks around
while KATJA helps JOSEF out: Her scarf is tied around his
eyes and they carefully walk upstairs to the house. The
neighbor’s dogs bark incessantly.

They stand at a staircase leading down to the basement
level. JOSEF hesitates, looks at the couple behind him,
who smile expectantly. TORSTEN bumps him playfully on his
rear.

TORSTEN
Down you go, little rabbit.

JOSEF smiles uncertainly and walks down.

JOSEF steps into the room and looks around: Posters, a
computer, books, weights, etc. It looks like an average
teenager’s room but is exceptionally tidy.

KATJA
We kept everything the way it
was.

JOSEF looks at his desk: Framed photos of a girlfriend and
three joints, neatly rolled.

TORSTEN
You want some time to relax?
Maybe change? Take a bath?

JOSEF turns to them, unsure. KATJA suddenly walks forward
and hugs him.

TORSTEN gently tries to pull her away but she resists.

TORSTEN
Katja, come on, please. Let’s
give him some time to adjust. We
can talk over dinner, ok?

JOSEF nods. TORSTEN holds out his hand and waits.

TORSTEN
Your cigarettes… She blames me
when you smoke. I’ll give them
back to you later.

JOSEF pulls out his cigarettes and hands them over.
TORSTEN grabs JOSEF’s head, slowly running his fingers
across JOSEF’s cheek and mouth, parting the lips with his
thumb.

TORSTEN probes JOSEF’s mouth and teeth with his fingers:
The tongue is pierced.

TORSTEN
That’s disgusting. Take that out.

A pause. TORSTEN backs away and smiles again.

TORSTEN
We’re very happy you’re here. Why
don’t you shower and come up? You
stink.

TORSTEN
Relax. Everything will be fine.

TORSTEN leaves. JOSEF sits down on the bed and holds his
head in his hands. He searches his backpack, find a little
bag of blue pills and quickly swallows one. 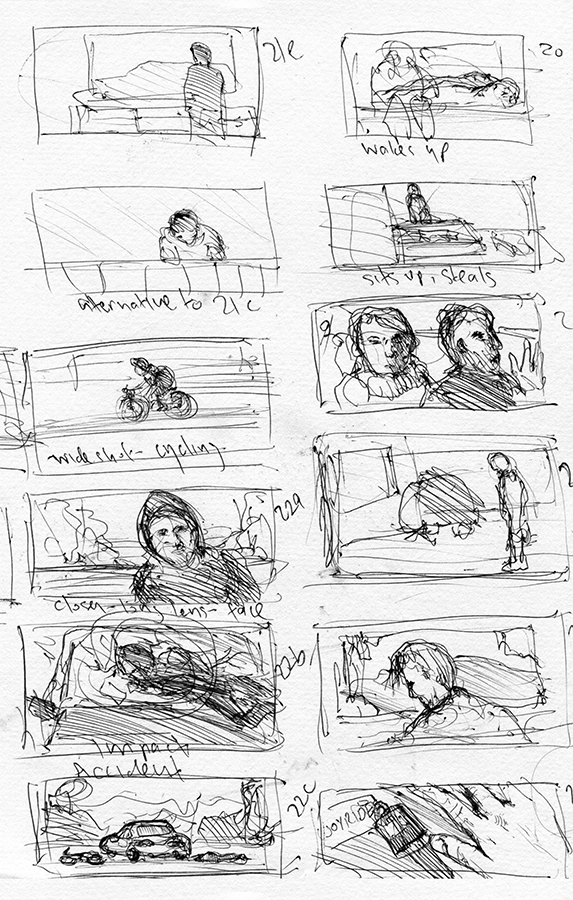 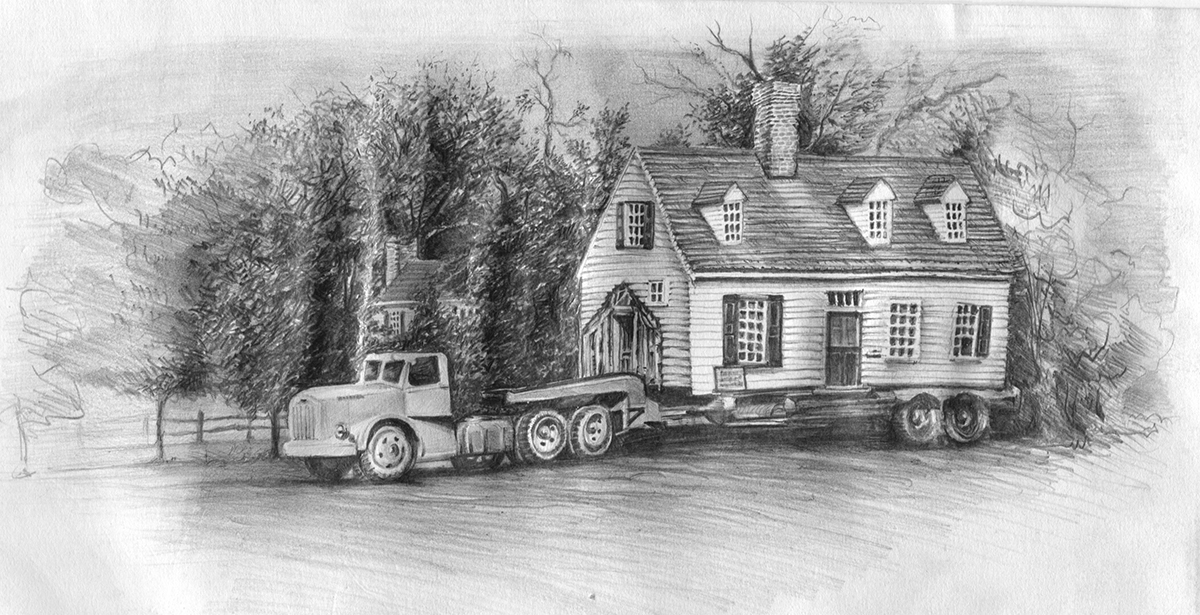 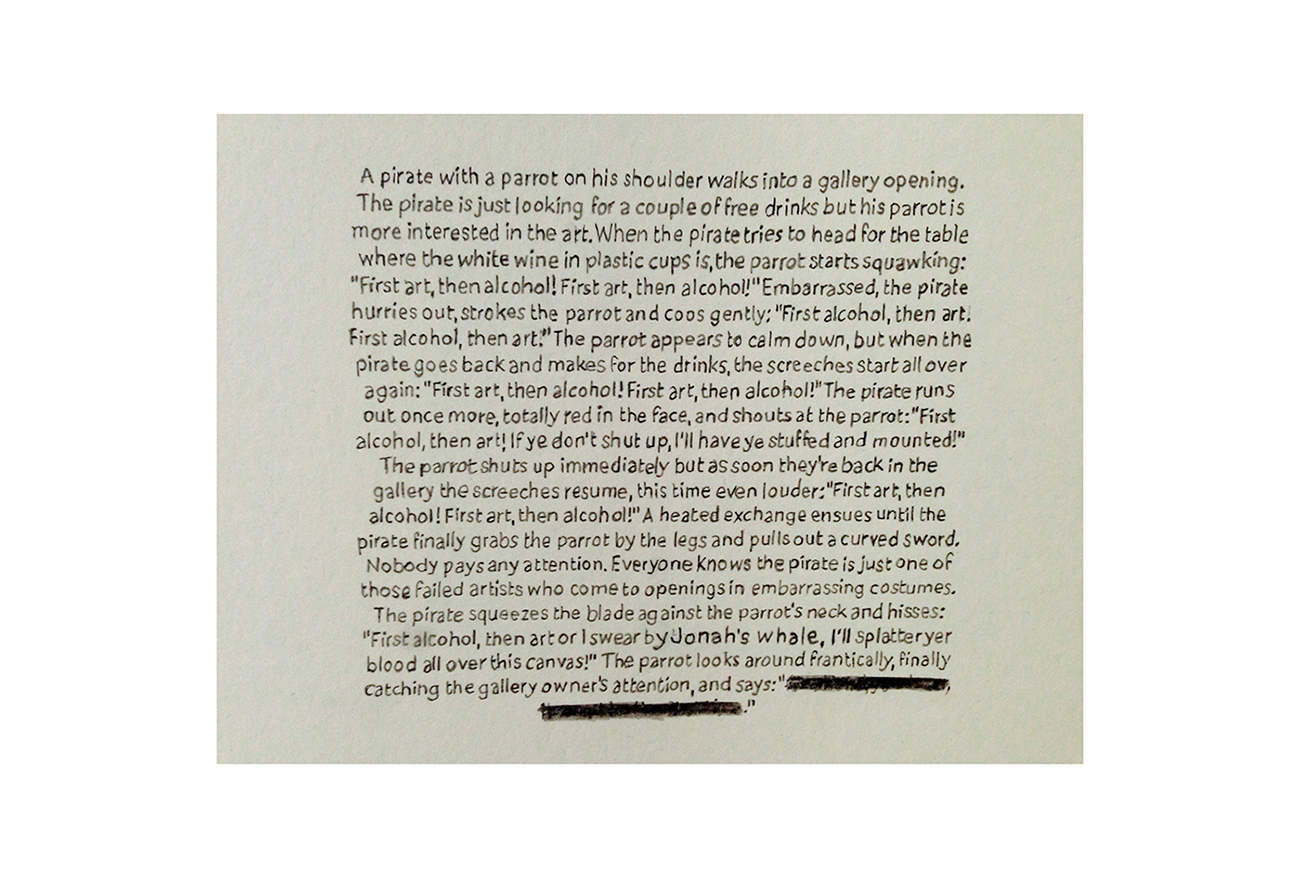