This “Carnet d’artiste” is an online notebook that presents some notes and documents chosen by the artist Arin Rungjang. It draws the line of work of his ongoing exhibition project, which is co-produced by CAPC–musée d’art contemporain, Bordeaux, and the Jeu de Paume, Paris. In his « Carnet d’artiste », Arin Rungjang will share the evolution of “Mongkut” –the name of the King of Siam (former name of Thailand) from 1851 to 1868–, a project that explores certain aspects of the franco-thaï relations via the study of particular objects. His project will be shown for the first time at the Maison d’Art Bernard Anthonioz in Nogent-sur-Marne as part of the exhibition program “Satellite 08”, curated by Erin Gleeson, from March 19 to May 17, 2015. More information here.

Arin Rungjang was born 1975 in Bangkok, where he now lives and works. His practice involves different media, mainly video and site-specific installations. As he dives into the depths of history and day-to-day experiences, he skilfully dissects his material to propose a reinterpretation of major events, seen through the prism of minor ones. By multiplying temporal and spatial references, he expects his public to reconstitute these different layers. After spending a year at the Beaux-Arts de Paris in Christian Boltanski’s studio in 2000, Rungjang graduated from Silpakorn University with a visual arts degree in 2002. Among his latest shows was « Golden Teardrop » for the Thai Pavilion at the Venice Biennale (2013) and at the Sydney Biennale (2012).

This Exhibition is presented as part of the Satellite program, coproduced by the Jeu de Paume and the CAPC – Musée d’Art Contemporain, Bordeaux. The Fondation Nationale des Arts Graphiques et Plastiques (FNAGP) and the Association des Amis du CAPC support the production of the works for the Satellite program.

King Rama IV (also known as King Mongkut) is well known in contemporary culture by a famous Broadway musical The King and I and a famous Hollywood film Anna and the King.

During the period of colonial expansion around the region known today as Mainland Southeast Asia, King Rama IV negotiated sovereignty for Siam in many ways, including by gifting two replicas of the Royal Thai crown.

On the 5th December 1857 (two years after Bowring Treaty in 1855 which liberalized trade with the United Kingdom in Siam) King Mongkut presented Queen Victoria with the first replica of the Royal Thai crown through a Thai ambassador’s offering at Windsor Castle.

On the 27th June 1861 King Mongkut presented Emperor and President Napoleon III with the second replica of the Royal Thai crown, again through a Thai ambassador’s offering, at the Château de Fontainebleau. 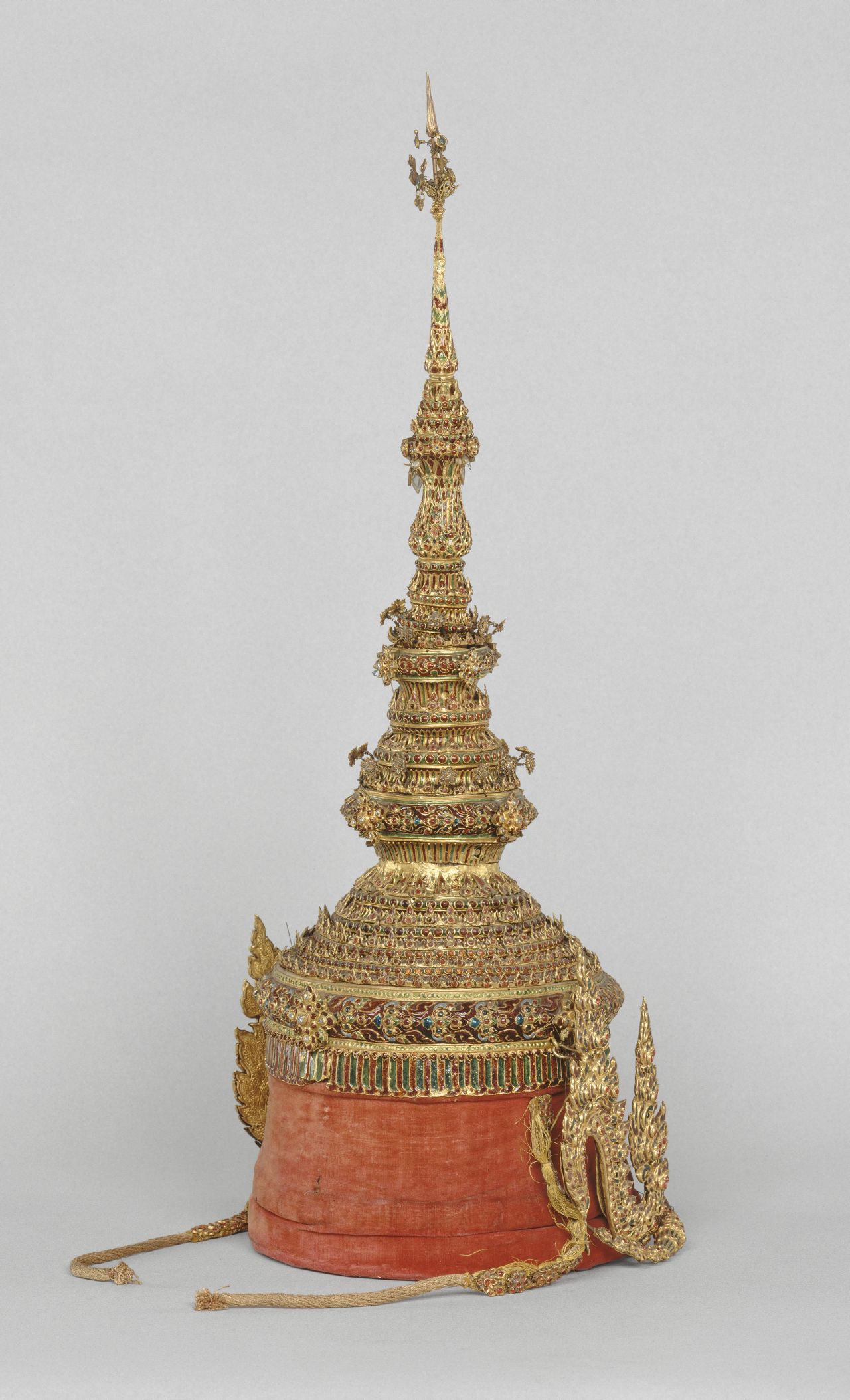 Replica of the Royal Thai Crown preserved at the Château de Fontainebleau, France 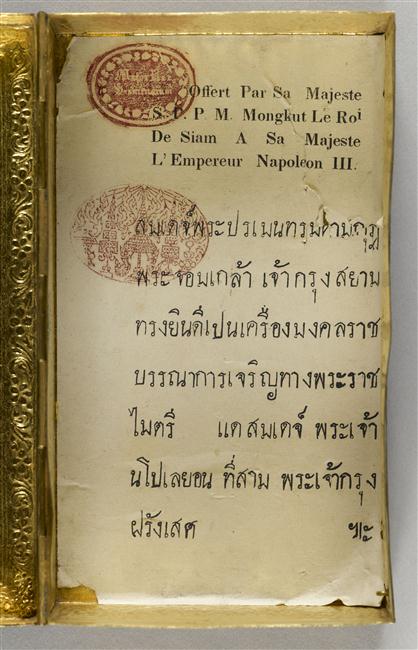 Inscription documenting the offering of the crown replica 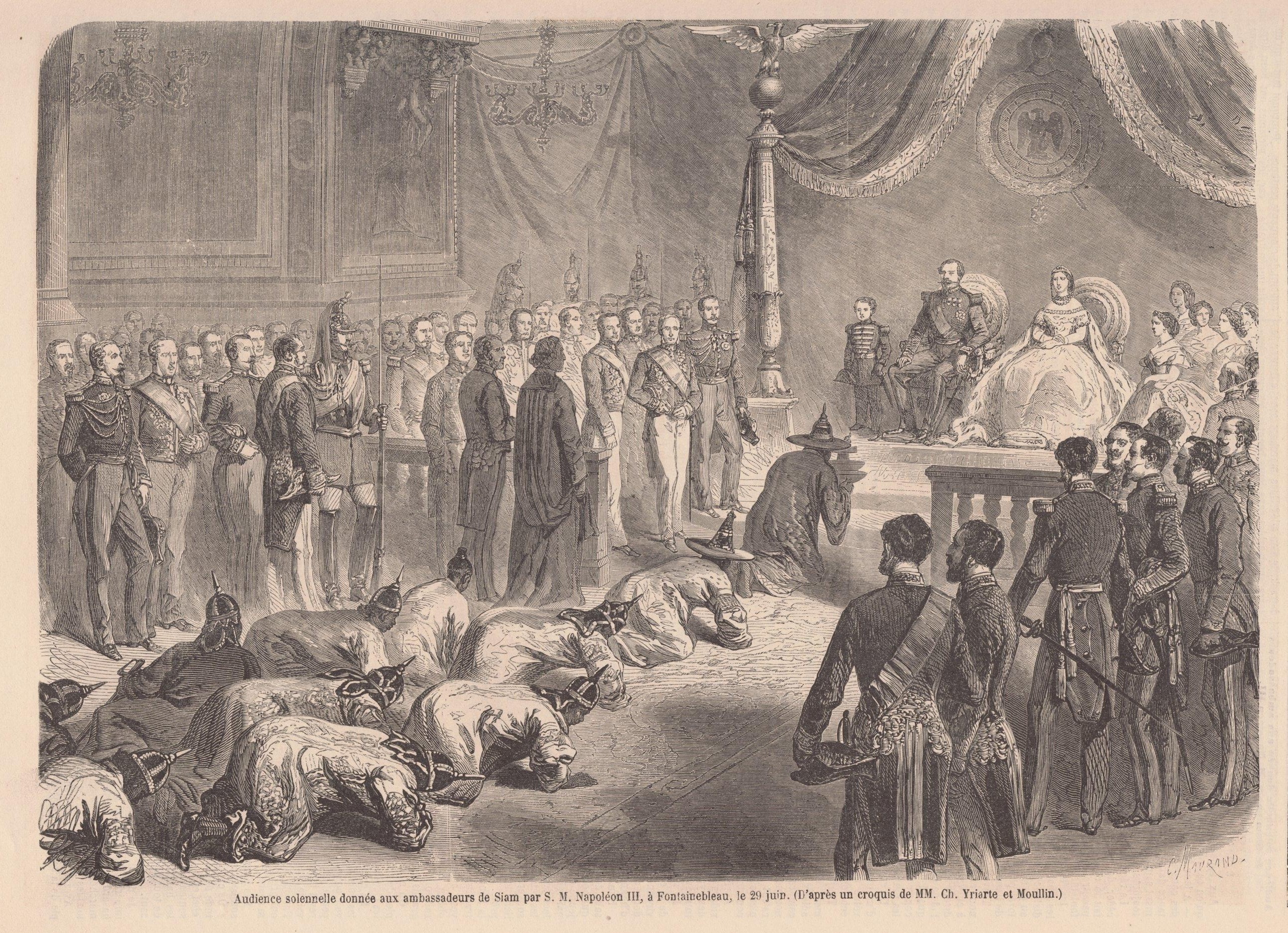 after a croquis by M. C. Yriarte and Moullin, « Solemn reception of the Siam ambassadors by S. M. Napoléon III in Fontainebleau, the 29th June 1861 » 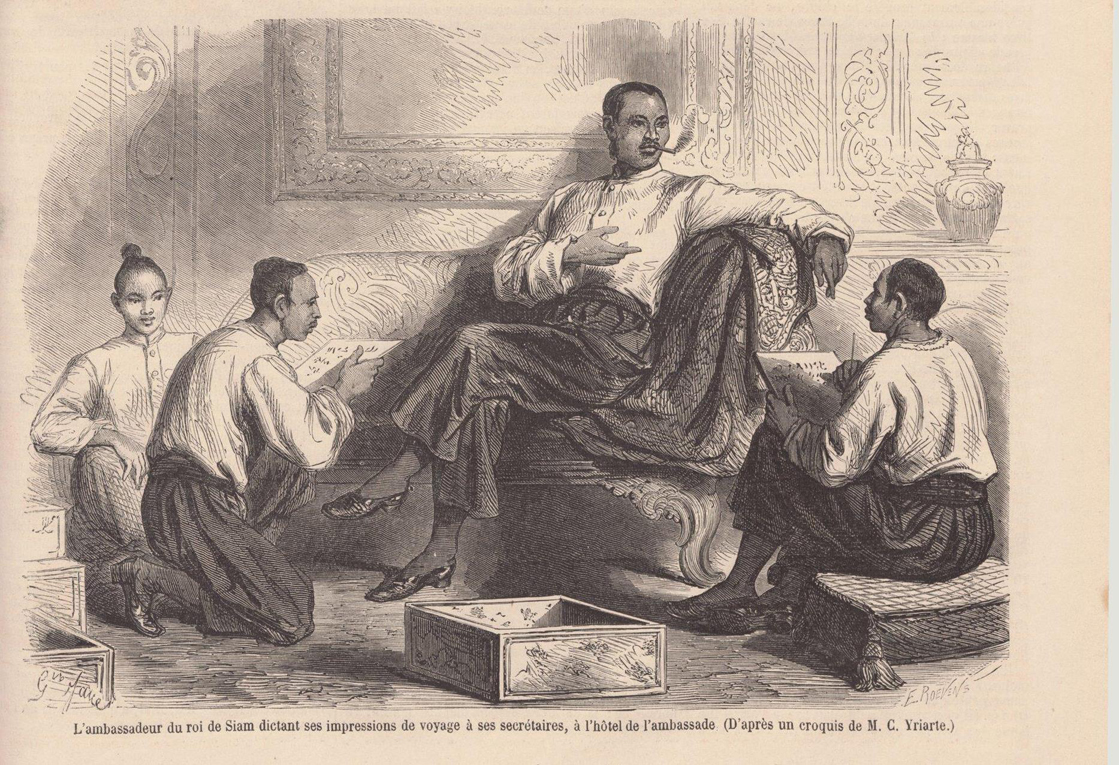