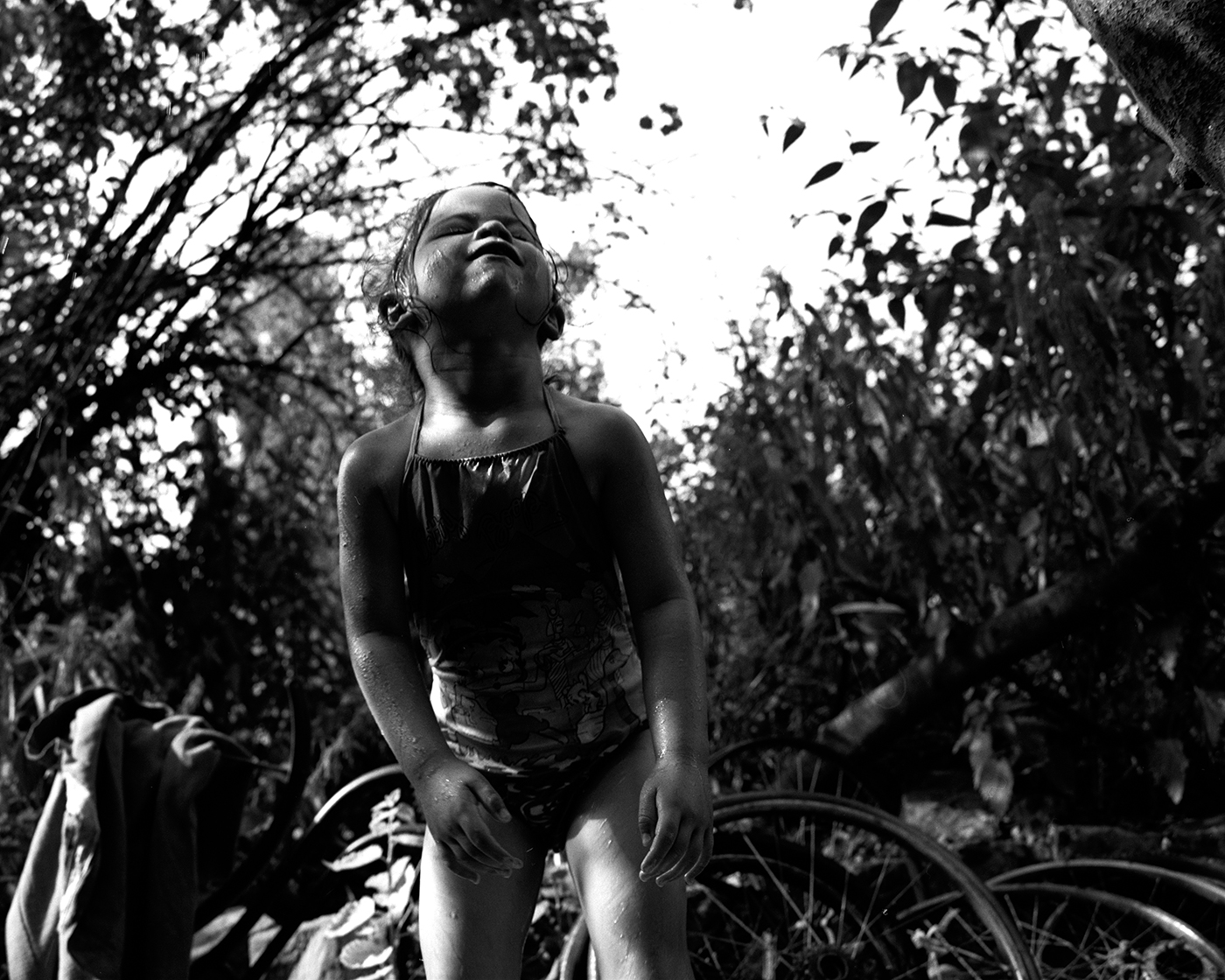 1994: Natacha lives with her family alongside fifteen or so down-and-outs in an industrial zone, from which they will be expelled to build the Stade de France in preparation for the 1998 World Cup.

Under the summer sun, in the heat of July, amidst the brushwood where the poor and homeless are trying to scrape by, a little girl turns her full body to the light. Glistening with droplets, probably the cool water from a hose or a watering hole of sorts, hair soaked under the invisible stream, she stretches her face forcefully, with delight, toward all that is higher than her and that she can suddenly reach, sturdy, confident, faultless. Beyond the treetops and seemingly beyond the sky, she is one with the sun, in a gesture of welcome and gratitude. This young body contains an athletic and ageless power. We sense that it is inhabited by the immeasurable energy of certainty. Eyes closed, she gives herself over wholly, and with a strange solemnity, to the nature surrounding her. The foliage framing her seems to form a sort of cradle in the infinite delicateness of its luminous vibrations. The trees and bushes are like a shelter for this figure lit up with joy at being alive, and with the dual force of sleeping and dreaming. Natacha isn’t standing quite straight, and her slightly bent body is held in the sort of fleeting balance that comes in the brief moment before jumping. She is ready to take flight and savor, the space of an instant, what may very well forever remind her of the feeling of her power and freedom. This body that could passively indulge in a blissful shower makes me think more of the powerfully active bodies of children who, at the moment of their birth, take a blind and courageous leap toward life. They all have that same serious respiration as they nervily arrive into existence…

Shortly thereafter, Natacha had to leave this territory, appropriated by institutions to house official athletes, famed for their performance and outstandingly profitable, in an immense stadium. But Natacha is the true athlete, the unknown triumphant sovereign. Marc Pataut’s image is a magnificent tribute to the abiding strength of those who, from the greatest weakness and most alarming fragility, against all odds, are born into freedom.