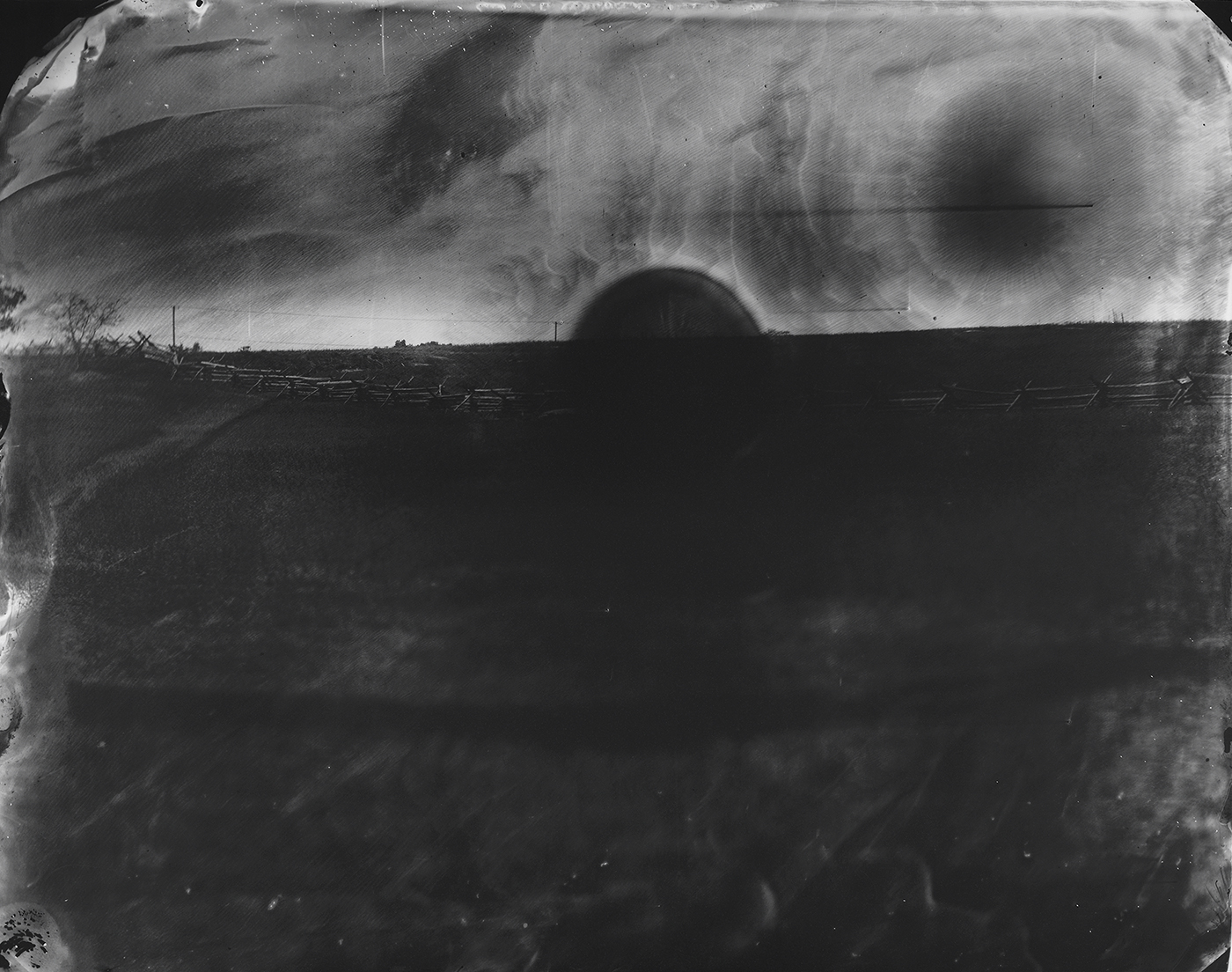 From the site of the deadliest battle of the American Civil War (Antietam, Virginia, September 17, 1862), a century and a half later, Sally Mann brought back an image produced with the help of mid-19th century techniques, with all of the imperfections – spots, streaks and burns – of collodion negatives. But why the choice of this literally distressing process, which eats away at the image to the point of making it hard to see – even invisible in places – whereas much sharper images could be produced at the time? Why this ghost of an image, which simultaneously offers and denies something to the gaze?

It’s that here, everything is a question of invisibility, in various ways – starting with the fact of the thousands of dead, absent from the image, yet present in this very absence, at least for those able to interpret the caption. The invisibility of the dead, of course, but also of death itself, which fully inhabits the landscape, is the landscape, but nevertheless remains hidden from view, due to the invisibility – metaphysical, this time – evoked by La Rochefoucauld in his Maxim 26: “Neither the sun nor death can be looked at steadily.”

Death necessitates a fleeting, sidelong gaze, a regime of visibility that is inevitably muddled and uncertain, forcing vision to stand in for sight. The photographer constructs this vision by combining a visual imaginary of the beyond with the empirical elements provided by the place, the central spot bringing to mind a black sun that no longer emits light but absorbs it. Death, this inverted world from which only images veiling the visible from the gaze may be brought back, rather than images that unveil.

This photograph also involves a third form of invisibility, related to the status of images, generally used to spark memory, but which here play with forgetting. Sally Mann does not opt for reconstitution or a documentary-style work that would rip history away from the indifference of its heirs, but for something resembling a sort of visual plea that the quickly fading past might make to the present, beseeching it not to let it fall into oblivion.

This rhetorical dimension is not merely a stylistic effect related to the photograph’s aesthetic choices: with this image in the process of consuming itself, and its content in danger of erasure, Sally Mann highlights the precariousness of photographs as a vector of memory, when, under the effect of time and ignorance, we merely perceive a shot of the Antietam Battlefield. This gaze then produces forgetting, for which photography provides no remedy, unless it makes this its very subject, paradoxically, as is the case here – forcing the gaze to come to terms with the invisible, somehow using this to see, while fully aware that little can be seen.