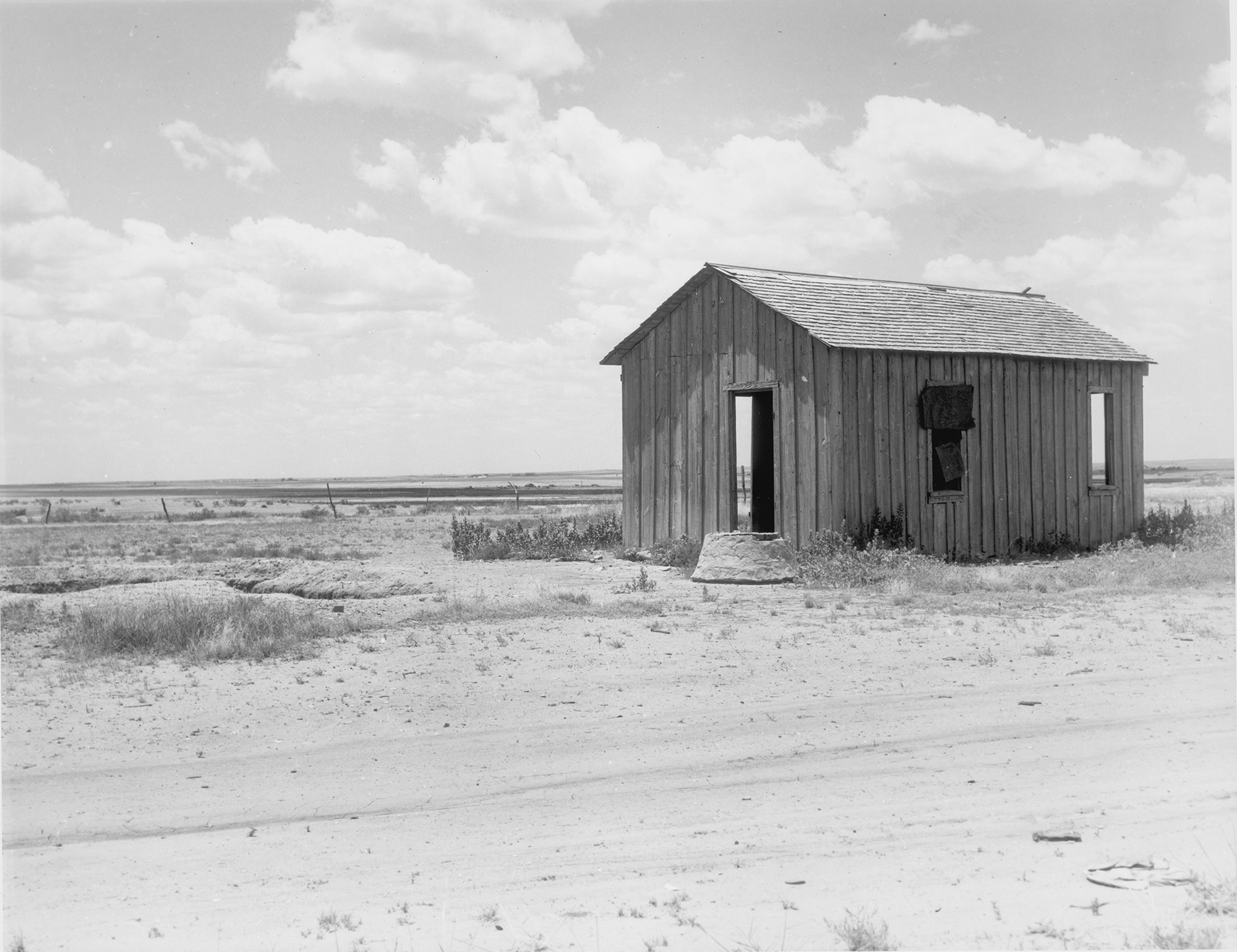 Dorothea Lange,Drought-abandoned house on the edge of the Great Plains near Hollis, Oklahoma, 1938 © The Dorothea Lange Collection, the Oakland Museum of California

The photographs of Dorothea Langue speak several languages. There is that of the body, with which we grew familiar through the iconic image of the migrant mother and her children, Nipomo, California, 19361see “Dorothea Lange. Politics of Seeing” /Migrant Mother, Nipomo, California 1936 © The Dorothea Lange Collection, the Oakland Museum of California, City of Oakland. Gift of Paul S. Taylor
: the marks they bear, their attitudes and posture, their clothing and their faces reveal an era, a social and economic context, as well as personal fates and inner lives grappling with the whims of history. And there is that of places, like the image examined here: it expresses the vicissitudes of time in spaces laden with meaning. What does this image tell us about this place? How does it make it emerge as such?

Judging from its caption, this photograph is merely one specific illustration, in Oklahoma, of the consequences of the drought that struck America’s Great Plains states from 1934 to 1939, driving nearly 300,000 people to abandon their homes and land. But this image is not limited to its informative and denotive function; it is suggestive of more than it depicts in constructing a place filled with absence. Beyond the house alone, it encompasses the whole constituted by the house and the singular space in which it is located, at the intersection of the horizon line splitting the image between land and sky. In the lower half, from foreground to background, we can see still-fresh tire tracks from a vehicle – the photographer’s, or that of the inhabitants who abandoned their home? – and a sort of crevice, then, as far as the eye can see, a vast dry expanse of earth and sand with scattered weeds and small posts. In the upper half, under a relentless bright sky, a slight wind scattering the dust can be sensed, under an oppressive midday sun devoid of all shadow (aside from the one the home casts on itself), in a desolate silence.

Lost in this desert, a simple wooden house, open to the four winds, stands vulnerable. Who lived there? For how long? Where did they go? This photograph doesn’t provide answers. But with palpable empathy, it illustrates the very meaning of uninhabitable. The vainly patched-up window attests to the residents’ final effort against the elements. The empty doors and windows abolish the border between interior and exterior, with the emptiness of the landscape now entirely filling the domestic space, bringing the outside in. Through the slanted perspective she uses to present this house reduced to its skeleton, Dorothea Lange allows us to imagine its ghosts, condemned to wandering.