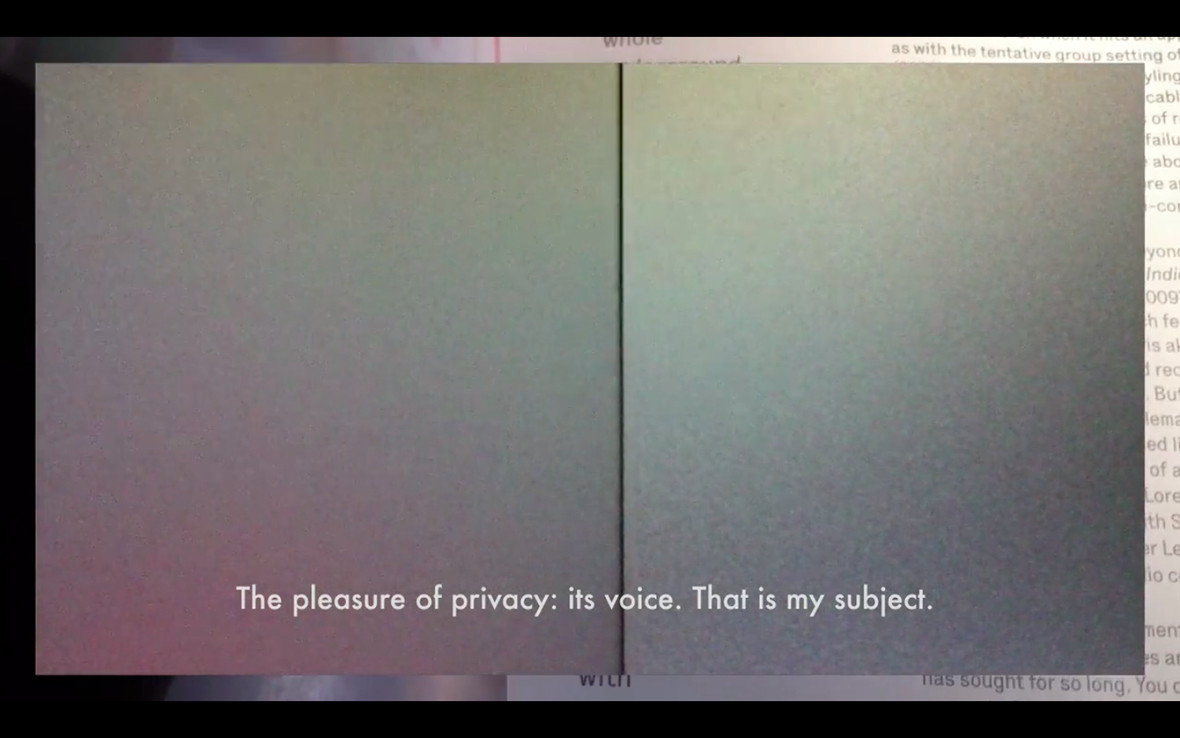 I got in touch with Quinn Latimer (1978) in July 2014, when the CRAC in Alsace was putting on one of her performances, “O Labor, Sister Continent,” in collaboration with Megan Rooney. The text took as its starting point Jean-Pierre Gorin’s film Poto et Cabengo (1979), and I was intrigued by the way the two artists interpreted this story of sisters and a shared, secret language. The theme is similar here: “Two Aunts,” the Thomas James poem evoked by Quinn, is a homage to his “dusky girls”: two drug-addict sisters on the prairies of North Dakota. Clara Schulmann

Quinn Latimer I was recently visiting a friend on an island, and she had Gordon’s autobiography, which I read under the palm trees for a few days. I was really struck by how clearly compelled Gordon was/is by men, and particularly by men performing in groups or constellations with each other — men in bands, mostly. She studies them, she seems to feel less than, always exterior or singular, etc. What is the title of her book? Girl in a Band? It’s obvious that she considers the female position a weak one to inhabit — and it’s understandable, but it’s not my own. Anyway, I was interested in her fascination with guys as I read her book because although I love men, and I live with one, and occasionally make films with him, I am most interested in women. They’re who I think about as a writer and artist — they’re my subject, in the way that men appear to be Gordon’s. They’re also who I write for, who I make work for — it’s always a female reader or viewer that I imagine receiving what I make. Which is to say, as well, that I don’t think of the female position as weak. I would describe it as dissident, perhaps. It’s certainly not hegemonic. But I don’t like to be in a weak position and to consider it my job to make it a strong one — that’s exhausting. It’s really just the old exhausting story of being a woman in society, a story I’d rather not inhabit as an artist. I just don’t find it interesting. As a writer, I’d rather my position not be a relative one. If I were to use Gordon’s hierarchal equation, though, I’d say that I like to engage with one medium as though it were another. The films I’ve made, I’ve approached as a writer; and in my writing, I often think cinematically, as though I were the film crew orchestrating the text or directing the performance. I think it can be helpful to adopt forms — to swap and tangle them — outside of your specific medium. It interrupts the kind of conservatism and professionalization inherent to specific art forms that carry certain expectations (both from the audience and from yourself as maker or author).

QL Yes. Although I don’t think of writing as lonely, per se — it can be much lonelier to come up against another’s person’s expectations, needs, and opacities in the course of a collaboration, and to not be able to understand them or meet them. I’ve only made a few moving-image works, and they were all with my partner — and they were all made with an eye toward live performance or an exhibition — so the communal aspect of the work was implicit from the beginning. Whereas writing is a conversation with yourself, with your past and future work, and perhaps with the writers who you are under the spell of at that moment in time.

QL My mother was a bit militant about both literature and feminism — and my father and stepfather were at ease in that militancy — so I was raised on feminist thinking and writing, our house was full of it, was made of it. I don’t remember a time when I was ever outside of it or in search of it. That said, as I grew up and moved to New York, and then to Switzerland­, which has a kind of unquestioned masculinist culture that I had never experienced before, and I began to make work in these places, I found myself in a very different kind of world, one where the voices of men and their work — whether literature or philosophy or art or activism or anything, really — were clearly dominant. Then, like Robertson, feminist thinking and writing gave me a place of respite, of home. It gave me not just the will to move forward, but a model of the kind of life I might pursue. And there was and is so much pleasure in that model. This work, then, became the world I chose to surround myself with — probably much like my mother had in the book – filled apartments of my childhood. Robertson’s writing, along with the work of writers and thinkers and artists like Audre Lorde, Hannah Arendt, Marguerite Duras, Chantal Akerman, Rosemarie Trockel, Moyra Davey, Kim Hyesoon, Anne Carson, Elena Ferrante, Gayatri Spivak, Nina Simone, Bhanu Kapil, Ai, Françoise Vergès, Susan Sontag, Julia Kristeva, and so many others, has been really instrumental to my own practice, whether literary, moving-image, or performance, both for its pleasure and its criticality.

4. Are cigarettes or other kinds of addiction part of your creative process with writing or moving images?

QL I don’t smoke, unfortunately, but I think the memory of drugs and drinking and friends — addictions, all — or even just the idea of them accompany my work at times. Certainly the fluorescent haze and palette of the images in my writing and films have a druggy air. But I also grew up seeing how addiction can overcome your ambition, can overrun it, and I’ve tried to steer clear of that ever being a possibility. Still, addictions — or at least their consideration, as metaphors for desire or hunger — can make the most pressing, embodied art. I always think of this poem by Thomas James about his two great aunts, opiate addicts on the American prairie:

When I feel the old hunger coming on,
I think of my two great-aunts,
A farmer’s daughters,
Speaking into the dusk in North Dakota.
I imagine the dark baron
Riding out of their mouths,
Thick-skinned and girded
Against disaster, swathed
In cuirass and chainmail and a curse.
My hunger was theirs
Too long ago. It swims in my blood,
Groping for a foothold.
It is the dark I thrust my tongue against,
The wine and the delicate symphony
That makes my head tick so exquisitely
Tonight. My ladies,
My dusky girls, I see you
With your bustles puffed up like life preservers,
Your needlepoint rose garden,
Your George Eliot coiffures,
Your flounces gathered like an 1890s valentine.
You both took heroin.
Your father never noticed.
You sprinkled it in your oatmeal,
Embroidered doilies with it,
Ate it like a last supper
At midnight. I know what you meant.
There was always the hunger,
The death of small things
Somewhere in your body,
The children that would never
Take place in either of you.
You were a garden of lost letters.
A lust inhabited your veins.
My addicts,
The village spoke of you.
Under your parasols, two rose windows,
The world swam with color.
Riding the monotonous hills at daybreak,
You escaped the indecisions
Your blood has handed down
To me. You rode your father’s spotted horses
As if they might have ferried you
Over an edge, a dark mouth in the distance.
I see you ride the black hills of my mind,
Sidesaddle, gowned in lemon silk,
Galloping
In your laced-up flesh, completely unaware
Of something I inherited,
The doubt,
The fear,
The needle point of speech,
The hunger you passed down that I
Possess.

5. Writing, like cinema, summons or awakens ghosts. Who or what haunts you?