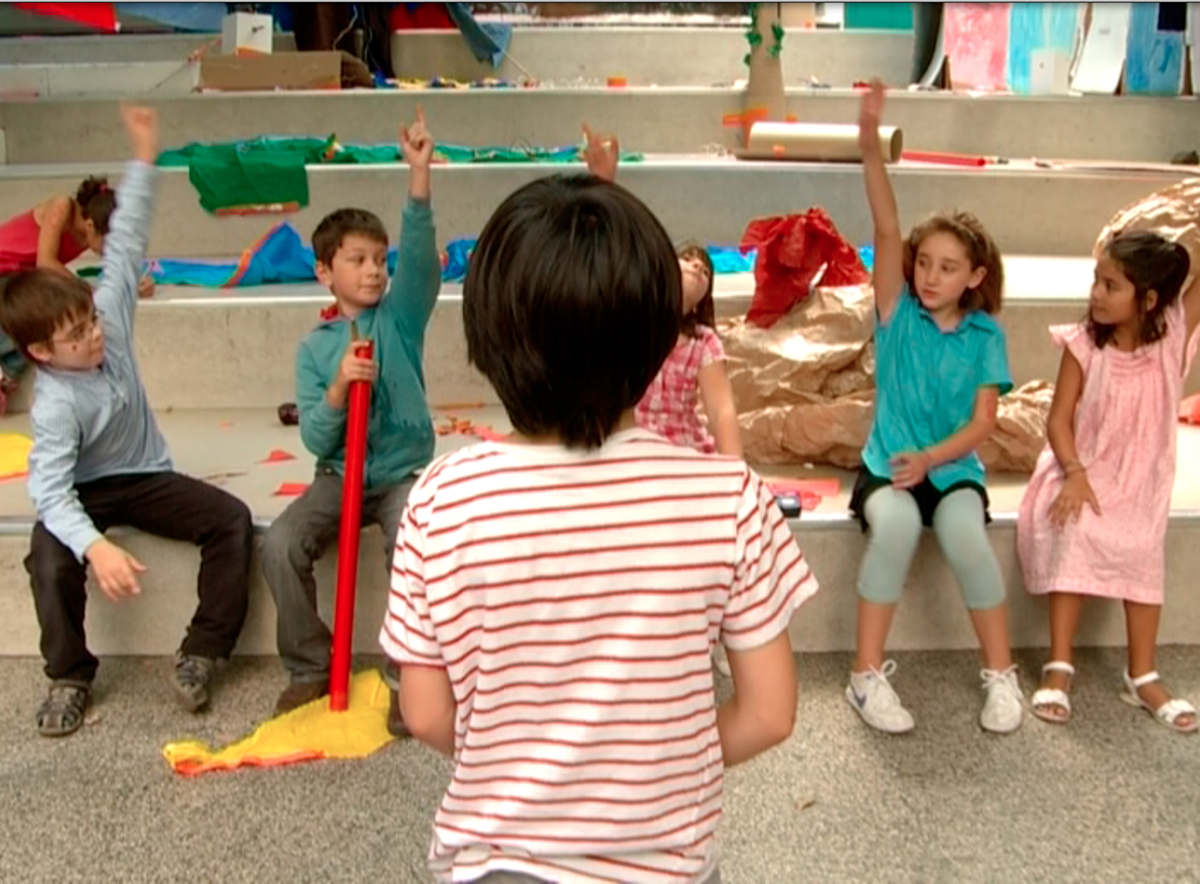 I discovered the work of Adelita Husni-Bey (1985) thanks to Vdrome, which showed her film Postcards from the Desert Island (2011). I was greatly impressed by the film. It was shot in Paris, at the École Vitruve, which offers children an experimental form of pedagogy. That was where the artist led a workshop inspired by the William Golding novel Lord of the Flies. The film describes the way in which children reinvent and debate their freedom, on a desert island, with adhesive tape and bits of wood. Clara Schulmann

Adelita Husni-Bey I am interested in peeling away another layer and getting closer to the core: What is seen as constituting “weak” and why? If the “weaker” sex is a way of attributing fragility to women, of placing and oppressing them, then let’s ask: why did Kim Gordon feel she was in a “weak” position and had to make it “strong”? What does it say about patriarchy? About the music industry and the notion of the frontman?
I suppose the foundation of what I do as an author rests on trying to find ways to interpel/ interpellate, which derives from the Latin “to drive in between”. ‘Inter’- in-between, and ‘pellere’ – to drive. I like the way it has acquired, in its contemporary version, the quality of being able to interrupt, and how it is used in politics as a formal way to question a minister. Identifying myself as a woman and using this word, I would probably say: “I like being in a position from which I can ‘break through.’”

AHB Neoliberalism makes vacuums of our affections, (repeat darkly: “there is no such thing as society, there are men and women…”); whether you are working on a film or watering your plants, your ability to concentrate purely on your own shitty existence and be anxious about it has probably quintupled in the past twenty years. If you submit to the digital working routine, I feel, life tends to become thin, transparent; so “collaborations” don’t tend to make for a less lonely experience of life in general. It’s a systemic loneliness, which I feel non-working in the company of others can assuage. Meandering conversations, sex, touching others; that’s got to be humankind’s natural therapist. So I am teaching myself to do that as much as possible.

AHB I’d like to think you “discover” feminist thinking only when you uncover your predetermined condition. You uncover what has been purposefully buried, discounted, neglected, pulverized, done away with. Women writers, artists, filmmakers, politicians, ironmongers: women, but also queers, migrants, people with different degrees of mobility. You discover this in E.1027, Eileen Gray’s house, defaced and then attributed to Le Corbusier, in Elsa von Freytag-Loringhoven’s (until recently) unsung contributions to Dada, in the countless expressions of patriarchy from work to language, from shame to guilt production in the souls of others. It doesn’t take long to see that our metanarrative is being woven in the image of white affluent men and uncovering this fact can be a horrifying experience but also a pedagogical one. Uncovering my condition, seeing the varying detractions of privilege take their toll on our so called “freedoms,” is a journey on a razor-fast spaceship; when you look out of the window everything is far and formally silent but you know it’s a shit storm back on the ground. Most of my trip was mobilized by my peers’ talk and touch and the kind of love that makes your brain go quiet. Did it give me the “will to write”? It’s made me locate myself as an “ally” of certain struggles and feel I’m in the eye of the storm in others.
There’s a little wooden boat floating a few feet away from me right now, you couldn’t go very far with it but you could ride it across the bay.

AHB I do some weightlifting, or lifting my own body-weight which is practically the only form of physical exercise I enjoy. I suppose it would translate into trying to prepare as deeply as I possibly can for each project, trying to read around my perceived topic as much as I can. Trying to think of its problematics, its paradoxes, its face-palms, but all this does not necessarily constitute a “good” practice. I realized recently that it’s a pretty academic form of “knowing” and it’s fraught with being an impossible task. So I am learning to lift less and feel/listen more.

5. Can you describe the family tree showing your sources, resources and references in both fields?
AHB Sonic Youth is in there, for sure. Being constantly uprooted, first because of my family moving around and now because of my work (the flying, precarious artist), which is a way of saying that my points of reference are too many to mention and probably tinged with misunderstandings. I suppose roots could be firmly planted in radical pedagogy; different ways to think about “learning” that do away with a prescribed master – student relationship, from Freire, to Kropotkin, Bell Hooks and the Radical Education Forum. A nymph might be care, care–taking, systems of solidarity and cooperation, such as the Movimento de Trabalhatores Sem Terra (MST, Landless Agricultural Worker Movement) in Brazil, and recent articles on “Calling- in” (Ngọc Loan Trần). My teens and early twenties were spent in and out of occupied and squatted spaces which I still, to this day, find the most deeply radical, fun and incredible examples of struggles for co-existence. I suppose branching out into urbanism and sociology is directly related to these nurturing spaces. The subsequent demonizing and criminalizing of squatting, alongside the effects of mega projects, stemming from regeneration issues, or “accumulation via dispossession,” as David Harvey writes, have made quite an impact on me.

AHB I suffer from a sort of expanded performance anxiety which makes me get obsessively distracted lately. The anxiety is probably partly due to a feeling of inadequacy, vulnerability or not being “good enough,” not being “deserving,” which is precisely how this S&M relationship to professional environments works. So I smoke things to cope. What do you do?

AHB The ghost of being able to survive doing what I love, the ghost of privilege, the ghost of take the money and run, the ghost of “how the fuck do people still expect you to work for free??” the ghost of DARPA, the ghost of I’ve been looking at this screen too long, the ghost of imaging Chris Kraus writing at a desk, the ghost of not having well-read enough, the ghost of there will not be enough time to read more, the ghost of how is it possible that I have language, that I can write to you and that you will interpret, that we are both “alive” on this “planet” now – I suppose that is the ultimate ghost haunting us all, and what would our experience be like without a common ghost?