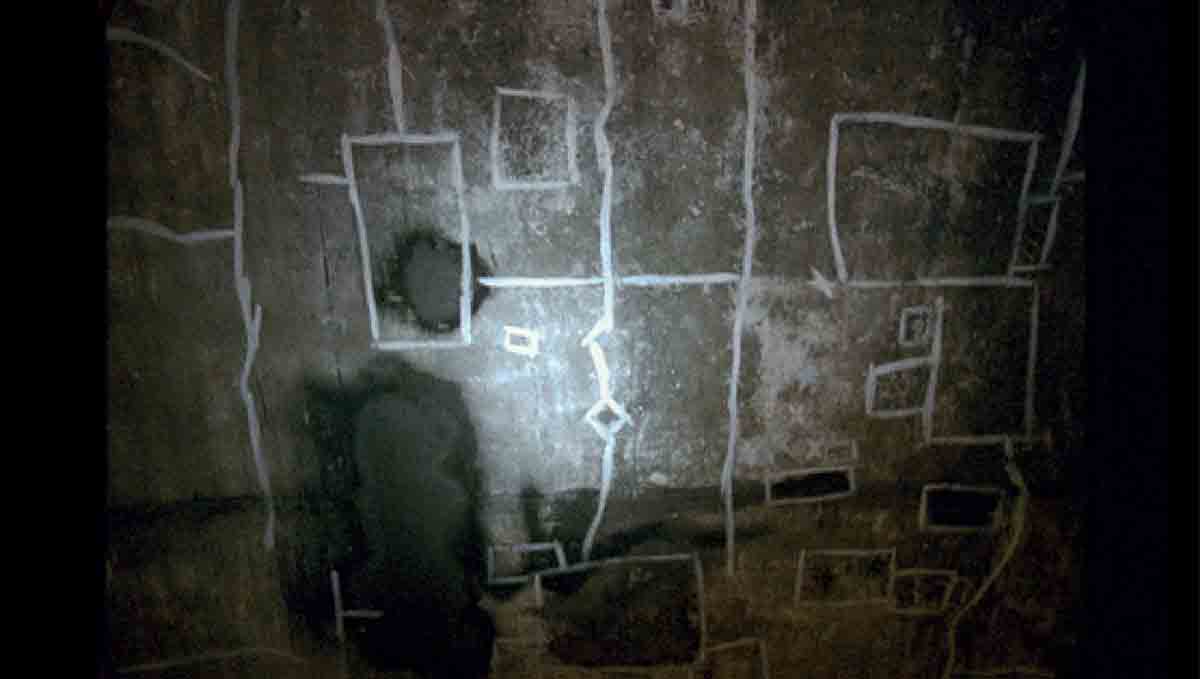 Here Rosa Barba (1972) talks about one of her films, A Private Tableaux (2010), which we projected with the Silo a few years ago. The film was shot in the tunnel across the Mersey in Liverpool. On the gallery ceilings, the artist films white drawings that engineers have been making over the last hundred years as a way of observing the cracks made by the pressure from the cars. Ancestral drawings, grottoes – mysterious narrative. Clara Schulmann

1. In her autobiography, Kim Gordon reproduces a text that she wrote in the 1980s about a Sonic Youth tour and her place in the band. “I like being in a weak position and making it strong”, she said. How would you describe your position as an author and as a filmmaker or as an artist making films?

Rosa Barba I see myself as conducting coherent performative entities – as a result of a process in which I tell my actors about the way of envisioning the narrative and the film. They are invited to (re-en)act based on who they are, what they represent to me and how they feel the narrative should be represented in the film. I invite people to come together and to perform their memories (through facts, documents) as a kind of collective performance; this determines and creates the fictional part of the films.

RB Yes, I do share her position. Looking through the camera as I grew up gave me the freedom to position myself outside of the given standards and to realize my feminist approach.

RB Riding my bike through the city and stretching whenever I can.

RB It is the possible explanation of a certain image. In my work A Private Tableaux (2010) I walked underneath the Mersey River recording the subterranean city pumping air through these tunnels. On the ceiling of these tunnels there are these handmade white drawings the engineers make to examine the pressure cracks made by cars overhead. They are like wall paintings or cave drawings. It is nearly impossible to imagine them as functional. They seem to follow a logic or make some shape or other. I wrote a narrative about these images and cut the film with this text, of these possible explanations. There is a sort of dialogue. A question and an answer.
I think we already carry inside ourselves what we are interested in and when you get to a place, you look for this specific thing, to see if you could find it there.

6. Are cigarettes or other kinds of addiction part of your creative process with writing or moving images?
RB Espresso…

RB Yes, there is always a certain concern that I feel a lot of people are sharing and often it is manifested in the landscape first, but it’s still not really super-clear, I like the fact that the landscape responds first, before it’s totally conscious what’s going on and that’s the moment when I feel very inspired to make a piece, so… and then trying to offer, not really solutions, because I can’t really offer a solution, but just different perspectives, and by suspending it, putting the concern upside down, I feel there is still a possibility that may be, at least in one’s thoughts.