There was a new kind of trouble last year at Kanye West’s and Kim Kardashian’s Hollywood Hills home: a drone hovered above the pool while their daughter was learning to swim. Does it worry you? According to the British tabloid Daily Mail, it should. Because drones will “soon be a regular fixture over YOUR home” (Daily Mail, 6.9.2014). And why would anyone bother to send a drone into the air above my, your, or anyone else’s place? The thing with drones is, they respond to a deeply rooted desire we all have: not just to fly, not just to spy, but to do both things at the same time.

Of course the idea of flying, or at least of building an object that flies, is pretty old. The Chinese invented the bamboo-copter around 400BCE. And of course the idea of mapping things, which more often than not implies an elevated viewpoint, goes back even further into the depths of human history. But the modern Western obsession with looking at things from above and putting them into a framed picture seems to have emerged at a rather precise moment, in the late 1400s. It was a strange combination of two processes that came intertwined.

1: The eye of the observer started to go up into the air. The point of view imagined by artists representing cities went higher and higher. A famous vista of Florence by Francesco Rosselli, most commonly dated to the early 1480s, shows the city as seen from a hillside. It doesn’t matter that the viewpoint as such does not exist in the actual landscape. The artist can be seen sitting there, taking in the view and putting it on paper. Less than twenty years later, a view of Venice made furore where the eye of the observer was as high up in the air as a bird flying on a clear summer day. Then, a couple of years later, Leonardo da Vinci came up with an even more radical solution. In a view of Imola, he construed a completely artificial plan, where every spot is seen from a perfectly zenithal point of view. It was an impressive feat. And yet the vista was a bit of a flop. 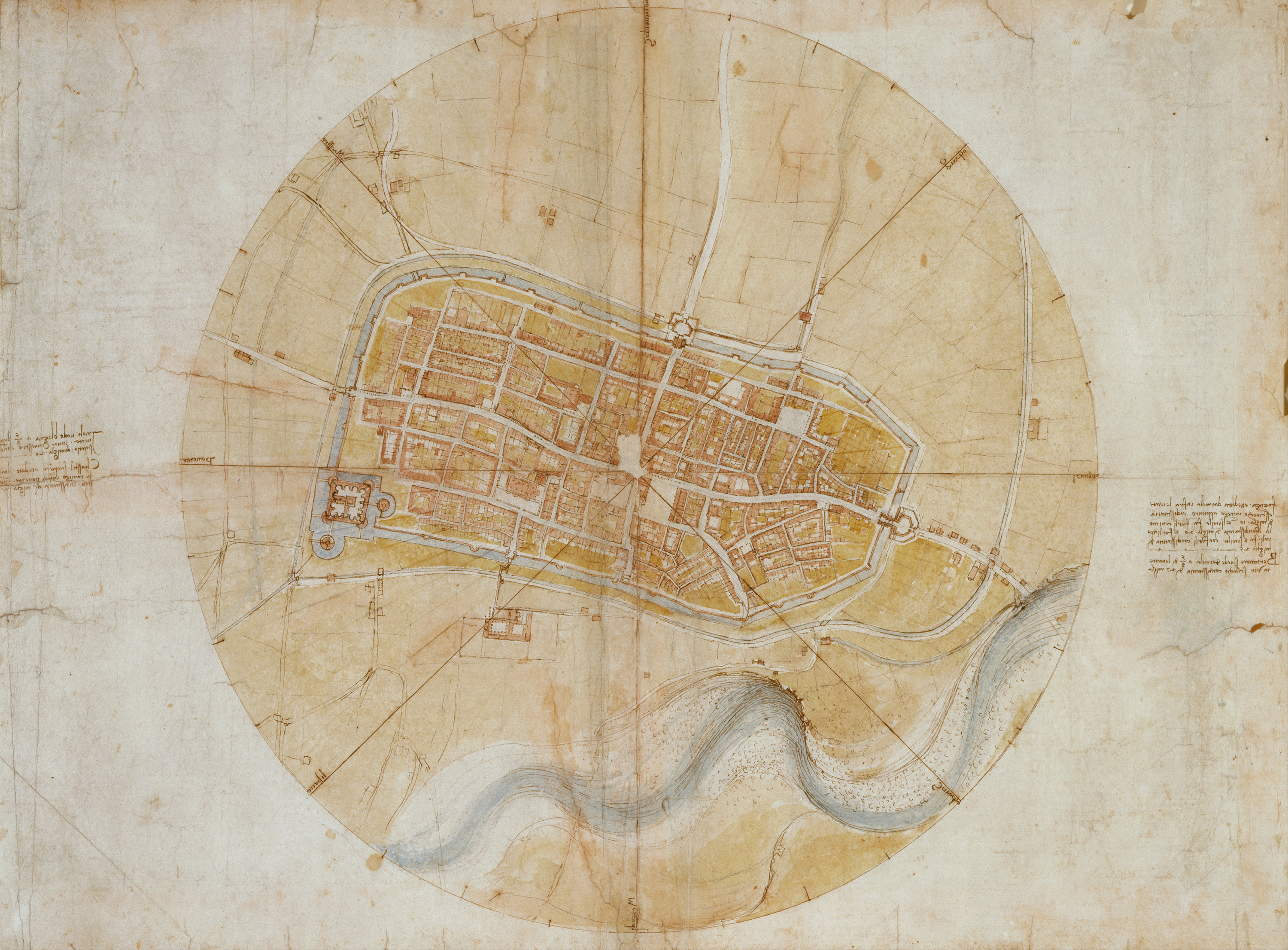 2: It was a flop because this was also a time of great developments in portraiture. Cities, like their inhabitants, wanted their picture to be taken, and taken out into the world. Whilst the first two vistas looked quite appealing as portraits, the last just didn’t. Leonardo may have proven his genius here as a mapmaker, but ultimately people found the result of his efforts dull. No streets, no windows to peak into, just geometrically construed, abstract urban space. It took another three centuries before such city plans became hegemonic. And today (perhaps as a sign of our postmodern condition) the slightly lower bird’s eye view is again a strong competitor of vertical views. It is, most spectacularly, what the Eyewitness travel guides have relied on to build their global empire.

But let’s come back to those Renaissance city portraits for a minute. Have you been to Venice recently? Did you take a map and still got lost? Perhaps you should have tried the vista made in 1500. It’s attributed to Jacopo de’ Barbari, though the name hides a much larger effort involving surveyors, engravers, investors, printers and paper-makers.

Here, then, is a dramatic expression of the desire to fly and see stuff from above in the Renaissance. No-one could go into the sky, but the technology to simulate flight was put in place so that people could see from far above. It was a matter of a) climbing bell towers to look at other towers and measure angles, b) walking along streets measuring distances and c) crunching the data with the help of complex mathematical formulae to build an artificial image. Oh, and then you needed the money and the material to actually put things on paper. That meant wooden plates of an exceptional size and quality; highly skilled engravers from, possibly, Germany; sheets of paper larger than anything that was available on the market; and a printing workshop that could handle all this. The result is, at almost three metres wide, quite a lot bigger than your average map.

No wonder only a city like Venice could afford such a costly selfie, and not many copies were printed either. To see one, you can travel to Venice and visit the Museo Correr on the Piazza di San Marco – provided of course you find it, or to the Minneapolis Institute of Arts. 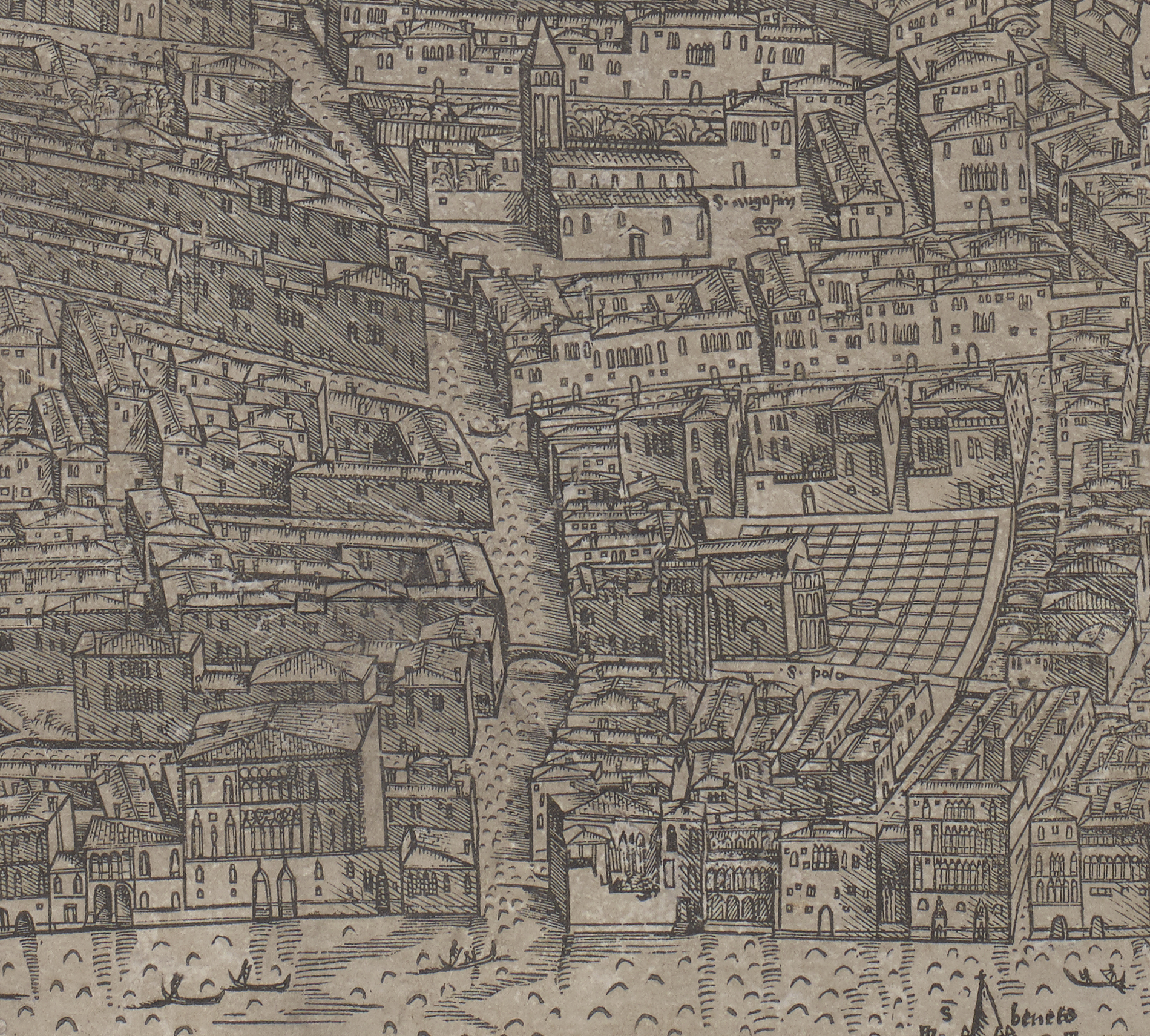 The detail is stunning. As I fly across the Venetian sky and come down here and there for a close-up, I imagine peeking through windows into the lives of the Serenissima’s splendid citizenry. Sex, crime and conspiracy are behind every pair of curtains. I love it. Who wouldn’t? If they had been given the opportunity, the Venetians would have had drones, plenty of drones all over the place.