As you may have guessed from my absence from the blog in the last couple of weeks, I have been voluntarily disconnected from the Internet, enjoying a detox, getting used to nourishing myself with water, sun and passing the time accompanied by dogs and goats; materials and presences which are decidedly less volatile that the signs of the screen. Before switching on the computer I had plans to talk about the new cycle of revolutions currently being announced, about transfeminist indigenism in Bolivia, Chile, Peru, Brazil…, about the history of colonization, about those that resisted slavery and the plantation economy, about the necessity to re-edit the work of Eric Williams and Herbert Aptheker in French and Spanish and about the histories still to be written…in the end, I’m going to talk about the first image I received in my inbox. This was a photograph sent by Manif pour Tous (a French group who fight against homosexual marriage and gay and lesbian parenting). Four young guys bare-chested in pink shorts use their bodies to make a tower, intertwining their legs and straining to form the shape of a cross, under a flag which portrays a symbolic heterosexual family (unit of four, holding hands) all against a mountain range and blue sky background. I had to look twice at the origin of this image (my first thought was that this was the “Holidays in the Mountains” cover of the gay magazine Têtu) to make sure that this was in fact an ‘action’ by an anti-homosexual militant group. A similar disconcerting effect occurred while observing the images and actions of the fundamentalist catholic and French far right-wing groups Les Antigones or the masculinist collective Homen. Les Antigones dress up as good “Mariannes” (long white dresses, ribbons the colors of the French flag and traditional bonnets) carrying “bread and salt” to the Russian embassy “to show their solidarity with a friendly ally outraged by Femen.” Meanwhile, Homen restore masculine sovereignty by showing their bare chests (like Femen, but with masks) outside the Hotel de Ville. 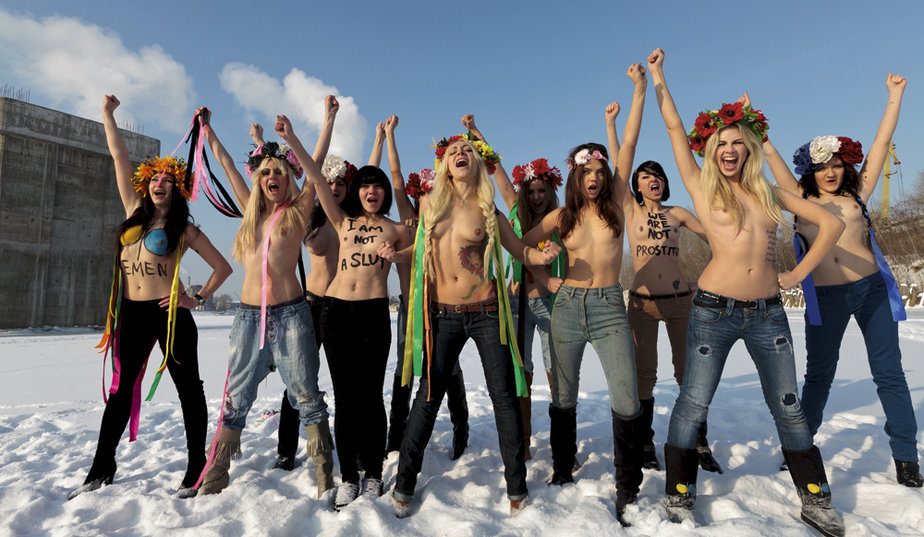 If I’m talking about these images in the context of a Blog dedicated to artistic practice it’s because I would argue that there is, behind these new reactionary activisms of the extreme right, a problem (call it a confusion of..) the aesthetic and performative order. My humble hypothesis is that the awakening of the new civil rights movements of the extreme right is accompanied by the consistent and paradoxical referencing of the forms of performative actions invented by the radical left: black civil rights movements, feminisms, sexual dissidence and AIDS activism.

The reasons for this aesthetic displacement are difficult to elucidate: perhaps the right have forgotten their cultural inheritance. When the homophobic right has claimed as their ancestor the gay and communist Jean Moulin, are we facing a form of oblivion, a negation or simply a banal lack of knowledge of history? How can we understand in alternative ways the recuperation of Antigone as a hero dressed in white bringing bread and salt to the embassy of Putin? Perhaps it’s just that the new right movements don’t dare to assume their true authentic visual-political references: futurism, fascist aesthetics, naturalism…

Historically, the actions of blacks, feminists and homosexuals have been characterized through the dissident use of the body in public space. In the 60’s in the geo-political context of the wars of de-colonization, the minorities (of class, race, sex, disability…) invented new forms of political intervention: African Americans refused to be an invisible and segregated workforce; heterosexual women refused to carry out the work of reproduction enclosed by domesticity; homosexuals, transvestites, transexuals and disabled people rejected the condition of ‘illness’, the exclusion from public life and they defended their right to full citizenship. The insistent presence of women, black, homosexual, transsexual and disabled bodies in public space is an answer to specific forms of biopolitical oppression and control. As Dick Hebdige argues in Subculture- The Meaning of Style (1979), the social and political minorities use corporal style (whether this be in the nude or with a veil) as a strategy that allows for an interruption of the processes of normalization, thus re-appropriating a body-code that has been confiscated or resignifying an object or space with which they are associated in normative ways. This process of reapropriation, “détournement” and semiotic resistence plays again the corporal style of the dominant semiotic community.

And here is where the actions of Manif pour Tous, Les Antigones and Homen start to loose the plot. Playing with the signs and codes of subaltern groups, our fellow citizens of the right (who are also representatives of the dominant majority) just end up making a mess. The white dresses of Les Antigones only frighten fashion lovers and the bare chests of Homen (if it weren’t for the masks) looks more like a group of bears off to the Marais. Deleuze has already stated that the fundamental difference between the right and the left is that on the left you have to think. Oh, and happy holidays!

Comments Off on Lessons in Style