Last weekend we organised an ecosex workshop and conference in the Reina Sofia Museum with artists Annie Sprinkle and Beth Stevens. It makes me happy to think that while fundamentalist catholic groups and the French extreme right were protesting against same-sex marriage and parenting in the streets of Paris, a group of 40 people were getting married to the Earth in the Retiro Park in Madrid under the auspices of Stephens and Sprinkle.  These were our vows: “Earth, we promise to be your lovers. Don’t let us get too far from you. We promise to love you until death do us part.” An army of lovers unite against the empire of war.

While we were collectively marrying the Earth, the anti same-sex marriage protestors were invoking “nature” to secure the heterosexual-human hegemony. The vanguard of their protest was composed of two donkeys on whose backs were hung the slogan “I’m an ass, I voted for Hollande.” In the procession there were also banners that criticised same-sex marriage as a form of “natural revisionism” (in a perverse twist of the rhetoric of anti-Nazism), as wells as photographs of a chimpanzee that read: “Why not get married to him as well?”

We find ourselves in a shifting historical moment in which new technologies and new relations of power are re-codifying immaterial labour (the production of signs) and biopolitical production (social relations, reproduction of life, affective work). Against the background of the economic crisis, the tensions between the “conservative naturalists” and those who are fighting to invent practices for social emancipation are exasperated further.

These public actions (the anti same-sex marriage and parenting protests and the Sprinkle and Stephens wedding with the Earth) make explicit two ways of understanding nature and the realm of the political, as well as two diverging agendas for organising the fields of production and of reproduction of life.  On the one hand, the heterosexual anthropocentric tradition, (the epistemological and political model central to colonial capitalism) according to which the heterosexual human is “by nature” the only subject who must have access to the technologies of government. For the biopolitical lumpenproletariat –unmarried and single women, animals, non-heterosexuals, the sick, the disabled, the Earth-…we have to be governed (when we’re not being exploited or devoured). On the other hand, there is the working out of a dissident political project that seeks to redistribute access to the technologies of government between all those who together form a living eco-system.

Inspired by the work of Linda Montano, Annie Sprinkle and Beth Stevens initiated a seven-year project of public wedding rituals in 2005. Since then they have married the Earth, the mountains, the forest, water, the sea, the moon, rocks, the sun…over 50 times and with more than 3,000 people. 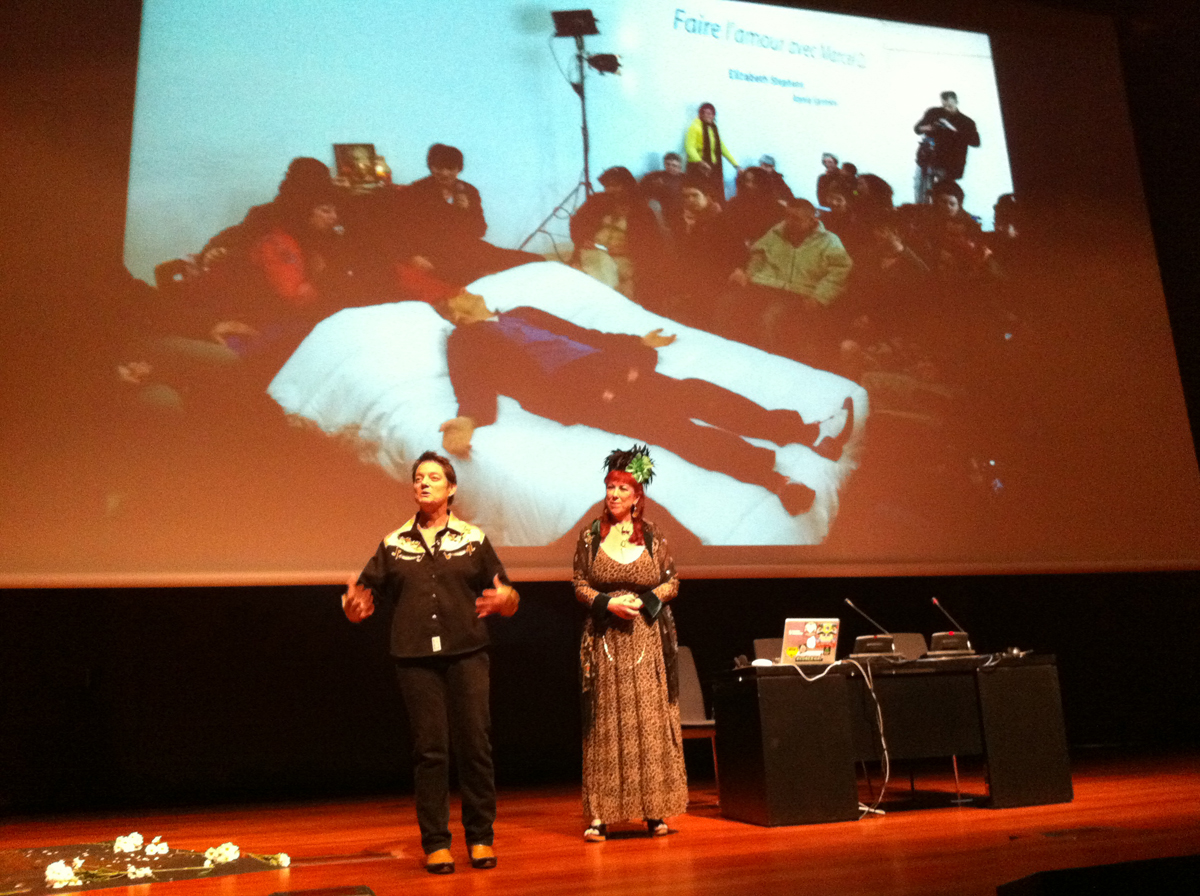 Sprinkle and Stephens individual backgrounds, before their artistic collaboration, reflects two lines of force within, following the denomination chosen by Lucy Lippard and Laura Cottingham, “Feminist Art.”  While Stephens was intervening within the codes of the gallery space and video art, introducing representations of lesbian and queer culture, Annie Sprinkle, porn actress and activist, began with the task of analysing and critiquing the dominant codes of representation in pornography as well as campaigning to defend the rights of sex workers.  Annie Sprinkle appears as a key figure for understanding the debates surrounding pornography that characterise the 80’s and 90’s in North America. Against a pro-censure feminism, articulated by authors such as Andrea Dworkin and Catherine MacKinnon, Sprinkle (anticipating Gayle Rubin and Judith Butler’s de-ontologisation of gender) unveils the performative technologies that produce a sexualised femininity and masculinity within the dominant regimes of representation of pornography, using the term “post-porn” to refer to this critical turn and the strategies of agency which derive from it.  The work Post-Porn Modernist, choreographed by Annie Sprinkle and Emilio Cubeiro (a collaborator of artists such as Richard Kern, David Wojnarowicz and Rosa von Praunheim) and the performance The Public Cervix Announcement, in which Sprinkle proposes the public observation of her uterus with the help of a speculum, are some of the most significant articulations in the development of this critical process.

While the 80’s were marked by the tensions between pro-censure feminisms and pro-sex feminisms, the first decade of the current century is characterised by the emergence of a network of political and aesthetic strategies of de-identification with the category of woman (drag king culture, the intersexual movement, transgender movement, functional diversity movement, crip-queer, indigenism…). These practices come to destabilise colonial conventions and the biopolitical norms for the production of the body, gender, race and sexuality. Here the term “post-pornography” becomes a concept-map which, rather than determining a fixed theory or a particular aesthetic, allows connections to be made between a plurality of strategies of intervention and representations of dissident sexualities. The weddings with the Earth show a step further from the post-porn work of Sprinkle and Stephens towards ecosexuality, and announce the widening of a “relational aesthetics” to a political sexecology.

The ecosexual weddings are laboratories for the transformation of subjectivity in which the participants modify their perceptions and feelings, construct relations and affiliations that go further than the binary alliances of two human bodies of a different sex (or even of the same sex). Ecosexual practices attempt, as Félix Guattari wanted, to provoke a revolution of “the molecular dominion of the sensible, intelligence and desire.”

Sprinkle and Stephens exceed the sexual medico-judicial categories (homosexuality/heterosexuality) and they affirm themselves as “lovers of the Earth”, “aquaphiles, teraphiles, pirophiles, aerophiles,” starting a process of re-eroticisation of the world which puts into question the hierarchy of the species, the reproductive definition of sexuality and the political stratification of the body:

We caress the rocks, and pleasure the waterfalls, and admire Earth’s curves often. We make love with the Earth through our senses. We are very dirty.

This affective proliferation that extends to everything and everybody, is not only an exercise in de-heterosexualising relations, but also in de-humanising social links. As opposed to defining love within the languages of romance, religion or institutions, it seeks instead a definition in ecological and artistic terms.

If Annie Sprinkle and Beth Stevens propose to get married with the Earth, it is, among other things, to give it the same rights that a partner acquires before the law in a ‘humanist’ marriage.  This action is similar to what the indigenous Bolivian or Amazonian activists do when they recognise Water and the Earth as “subjects before the law” in the Constitución del Buen Vivir. Bruno Latour suggests something similar when, appealing to “Gaia”, he invites us to extend our political theory beyond the human. Like Sprinkle and Stephens, Latour calls for a “parliament of things” that includes not only human subjects but all those who participate in the global techno-living system.

PS : If you want to become an Earth’s lover, the next ecosex workshops will be taking place at Emmetrop in Bourges (France) July 4-7, and Colchester, Essex (UK), July 20-7.
www.ecosexlab.org 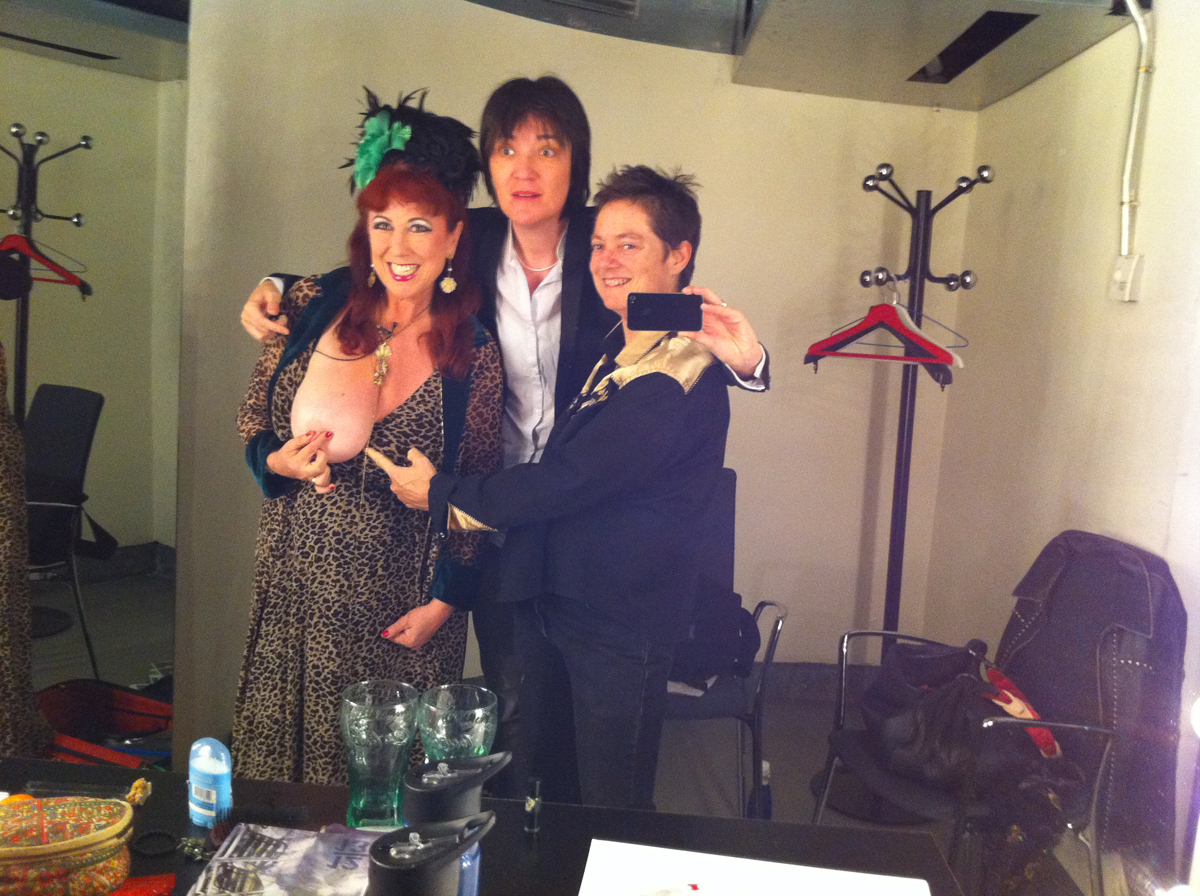 Comments Off on Ecosexual Marriage with Annie Sprinkle and Beth Stephens