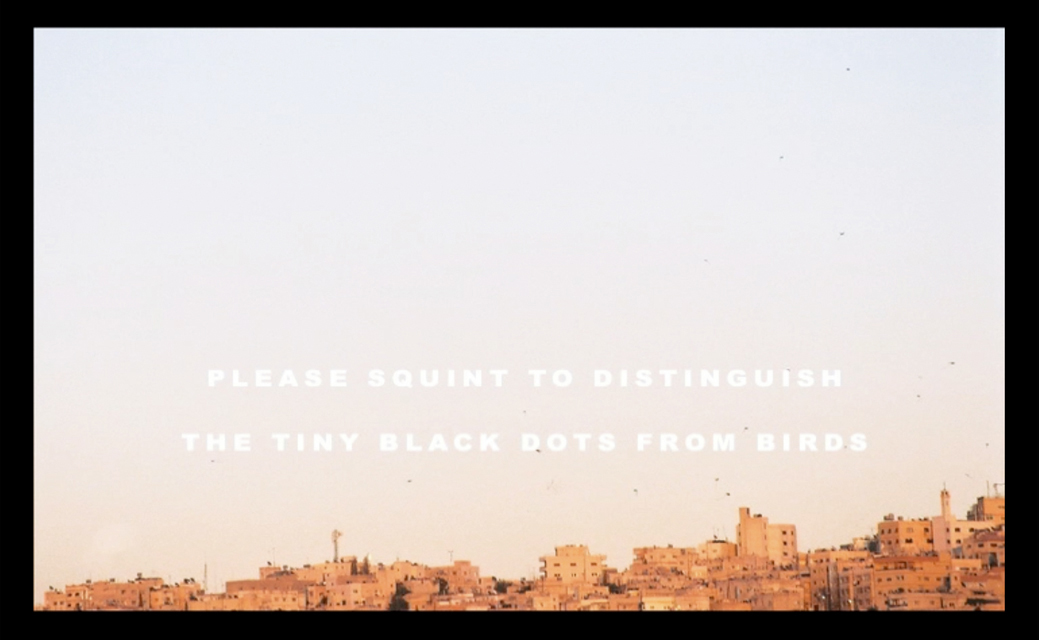 The Story of Milk and Honey, a video project by Basma Alsharif, 2011

I am indebted to Anaïs Farine for my encounter with Basma Alsharif. She had come to present her film The Story of Milk and Honey (2011) at INHA, in a programme that Anaïs had punningly dubbed “Contes à rebours au Proche Orient” (Backwards tales/countdowns in the Near East). The narrator tries to recount a love story with images and sounds, but the project is constantly failing. Here she answers my questions, particularly regarding her relation to feminism. Clara Schulmann

– In an interview, the poet Lisa Robertson writes: “…as a very young reader, in the 80s, I constantly felt affronted that I could not find a point of recognition in the extreme masculinist philosophy and literature I was reading. To discover feminist thinking and writing was a recognition that gave me the will to write. That was a very relevant kind of pleasure.” Do you share her position? How did you discover feminist thinking and what difference did it make to you?

Basma Alsharif I like this question best, because I often have difficulty answering questions that are directed at me specifically as “a woman.”

My experience of being female was one of latent discovery. I never doubted my biological make-up or had any confusion about it but quickly became aware of discord between how I understood myself and what others saw – which is a rather common experience and not just a gendered one.

I feel as though I have been part of some kind of “art world” since an early age. It is clear to me, whether or not I knew it then, that this is the direction I was heading in: I wanted to make things. And for years and years, I didn’t realize that the majority of the artists and artworks that I was being shown, that were influencing me, that I was taught to respect, were made by men, curated by men, in institutions largely run by men. And not just any men: white, straight ones. Without getting into all the frustrations of what it is to simply be a woman in today’s world, let alone the working world, or specifically the working art world, I can simply say that it was disheartening initially to realize that I was going to have to work harder to seek out female influences but that actually, as soon as I did, there were plenty of (female) artists everywhere, making incredible work. The sadness comes in actually having to identity myself as a gender to begin with, which above all feels exhausting since I am constantly reminded that I am female anyway.

Maybe, without intentionally meaning to, I sort of rejected the idea that I should have to do this, since it seems much more important that white, straight, men acknowledge their genders and make an effort to not dominate as easily as they are allowed to dominate. I would, as with my national and cultural identity (the real place where I can’t find a point of recognition), allow for that line to be blurred, allow for my gender and my influences and the kind of work I make to not be defined so easily along gender lines, because aren’t we already far past the moment where we have to be either male OR female? I like to pretend that we are past that limited perspective and to act accordingly until the rest of the world, which hasn’t figured this out yet, catches up.

My will to keep making work comes from the fact that I am excited by other work and excited to contribute to it. It is not only based on other people making work but about all the other kinds of work that is out there in the world and largely unrepresented. I’d like for us to get to a place where we have a width swathe of arts of all kinds of genders and races, a place where, if you end up being influenced by white, straight men, it would really be because of a preference for a particular artist(s).