“Are you a Muslim?” I asked him. “I was born a Muslim, but I don’t practice. I think that God doesn’t need any intermediary, he communicates directly to any human soul”. Mamadou Keita comes from a Qadiriyya background, one of the Sufi orders that slowly came from the East during the 17th century. “… Besides going to the mosque and to the church, people in Mali go to the fetish man. They go to the Marabou who writes things to protect, to bring luck and to heal them.”; “The catholic priests burned many things, but they didn’t burn everything. They collected some. The priests and the European traders were the ones who invented the African art market.”; “I grew up with tribal art in our yard. Everything was authentic; there was no industry to produce the sculptures. All that was sent to Europe in the 50ʼs were authentic pieces.”; “All that is carved today is fake, it’s only made for selling. The real stuff is circulating in the West between collectors and dealers”.

I ask Keita for the prices of some of the pieces he had to sell. He asks me if I’m a collector and laughs. Obviously, I’m not. He asks me to wait and moves towards the big shelves that cover the whole wall of the room where we can admire his collection of artifacts. I wait. He takes his time and picks a small bronze statuette. It was a very little figure, like a stick man, holding something in the hands. He gives it to me, and as I look carefully into the face of the figure, observing its bizarre smile, he says: “this is an Akan piece from Côte D’Ivoire.” I move my eyes from the face towards the hands and Keita continues, “That’s the Slayer”. I imagine a curved blade in his right hand and a human head on the other as the figure mimics the beheading of an enemy. With a beautiful smile, Keita stands straight looking at me looking at the figure on the palm of my hand and says: “You should always keep him with you. He will protect you from your enemies… he will chop the head of anyone who tries to harm you”.

Catholic culture is a fetishistic culture. It’s a mindset in which people developed deep emotional relations to naturalistic images. Religious followers, in general, worship holy representations in the form of paintings, sculptures, kitsch glowing statuettes, cheap pocket prints and plastic saints made in China. Western European Art History is grounded on that emotional tie to images. On the dramatic effect that they have on Human beings. The first time I saw Caravaggio’s The Martyrdom of St. Mathew in the church of San Luigi Dei Francesi in Rome, I was absolutely overwhelmed. The whole dramaturgy of the painting, together with the interior atmosphere of the building, makes it a sublime experience. It is an elevated vision: ‘God’ is in the room, some would say! Religious art is supposed not just to represent but to bring the ‘spirits’ to our presence. To turn them into something tangible. Isn’t this a wonderful contradiction to our modern analytical intellects? Caravaggio makes me feel those presences, but once I put my critical apparatus in motion, I just destroy them with concepts. It doesn’t make any sense, but it really does! Funnily enough, this might constitute the criterion for understanding the emotional effects of an elevated artwork. Objects that make me feel the powerful contradiction between reason and emotion, as well as their vital correlation. Am I, as a spectator, activating the spirits of art or are they activating me? Am I looking at them or are they looking at me?

Churches all over southern Europe are full of reliquaries. Box-like objects where pieces of human bone, hair, blood, and flesh are exhibited and worshiped as holy items. Some reliquaries are carved in the shape of the body parts they keep inside, like the hands I saw in the church of São Roque in Lisbon, or the golden torso for the jaw of Saint Anthony in the Basilica di Sant’Antonio in Padua. The examples are endless.

Pilgrims come from all over the world to touch the feet of the statue of Saint Peter in the Vatican. Hand after hand, touch after touch, millions and millions of foundlings have polished the feet of the figure, which now look like two surreal pieces of shapeless melted bronze. This touch is a religious ritual gesture that dramatically shapes the image of Peter as the ritual use of the Songue or Bakongo figures shapes the image of the ancestor that they represent. If, in the first case, ‘touching’ the image literally erodes its material, in the second case, it adds to it.

“These are all nails, each nail is a wish that someone nailed to the figure. If you want to kill or cure someone you put a nail in it. All of them are wishes. People project their desires on it.” Keita shows me a picture of a figure covered with nails and small objects hanging from them. The figure became an informal accumulation of metallic parts, pieces of fabric, mud and other materials. It also reminds me of a wall that I’ve seen in a church (Igreja da Misericórdia) in Monsaraz, in Southern Portugal, where people hanged, through layers and layers of ritual accumulation, an impressive diversity of votive offerings, plates and scraps of paper with drawn ex-votos; or the Capela dos Aflitos in São Paulo where little folded notes with vows addressed to Saint Chaguinhas are constantly left stuck in the gaps of the wooden gates. 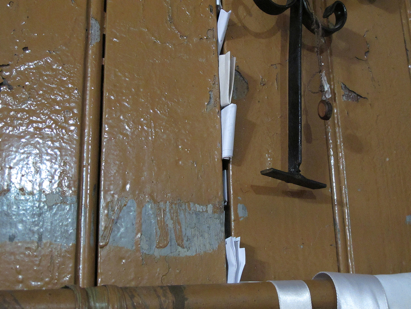 Detail of the gate at Capela dos Aflitos in São Paulo. View from the interior
of the chapel. 2012. Photo by Daniel Barroca

“Usually there is some magic power in this hole here.” Keita points at a hole on the belly of a small reliquary figure on a shelf. “A magic power (…) maybe gold, silver, the blood of an animal, a placenta, human fluids or a human body part”, “Like the big fetish of the Bamana. The bulls. They are made with mud and have something inside. Before they are covered with the mud, people leave the Power inside their bellies. The Power is the Soul of the figure. As I said gold, silver, an animal or human part.”

Keita moves towards the shelves that cover the wall of his living room and takes a book. I can hear the sound of his fingers going through the pages and separating the sheets. He takes his time. For a while, the noise of the friction between skin and paper sets the pace of our conversation. He shows me images in the book and compares them to some of the artifacts that he has for sale in the house. He points out details, compares items, mentions places and recalls how this and that piece came into his life. He tells me stories about cursed idols that destroyed the lives of those who dared touch them and about others that brought nothing but prosperity. At some point, he reaches one of the lower shelves and chooses a wooden image. Compared to the others, it was a very unusual sculpture, because its forms were less synthetic; in a way, it was a less objective piece of work. With regards to its face and hands, the carver invested a lot of time and effort in sculpting of the draperies; if I remember correctly, there were still some remains of blue color on the folds. Keita told me that it was a Holy Mary chiseled by a Chiwara artisan who was used to carve masks and idols. Suddenly, that small piece seemed to concentrate in one single image everything that crossed my mind while he was showing me his collection of artifacts and books. For a while, that image of what I saw as an Animistic Holy Mary, represented the collapse of history into one single object. I could see, simultaneously and as clear as crystal, the twisted, violent, exploitative exchanges, the ancient and modern waves of occupation, the interactions and erasures that happened between people in that part of the world and that, in the most twisted ways, imposed the emergence of new forms of belief. Forms of belief! 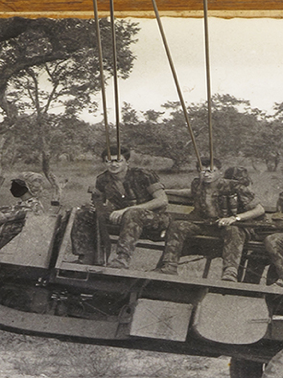 Keita is a tribal art dealer from Mali living in Amsterdam. Like me, he some way found his path into art because of his father’s war experience. Keita’s father was a soldier in the African units of the French army during the Second World War. My father was a quartermaster in the Portuguese army between 1972 and 1974. Keita’s father grew up in a Malian village during the French colonial occupation, and the first time he saw Europe was when he was drafted and sent to fight for Europe’s liberation in the Italian front. My father grew up in the pagan fields of lower Alentejo. His family almost never heard about Africa until the day he was drafted. As a matter of fact, he was sent to fight a war by the same political regime that exploited them. Isn’t that twisted?! And why am I bringing all this together? Islam, tribal artifacts, catholic relics, magical practices, world wars and “colonial” wars, Keita’s father, my father, young men in military uniforms, peasants turned into agents of repression and/or freedom. After all the ordeals! Which narratives have been shaping us? What kind of historical montages inform our approach to one other? So there I was, standing in Keita’s Dutch living room, learning about pre-colonial Africa and its complexities, the magic power of objects, the commercial system where they circulate and, above all, trying to create a linear montage within the confusing repository of our memories.